A follow-up to my most popular Blog “Smarter Aid, not More Aid”. 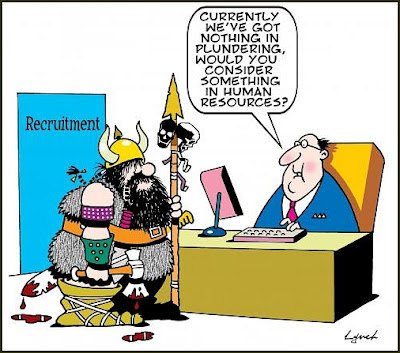 Play on words. Cambodia is known as the Kingdom of Wonder but because of corruption this is changed to Kingdom of Plunder. This is the default position in human resources management where seldom does the best person get the job.

Life can be strange.  Although things can work out as expected for people, often they don’t.  We see that there are some born to follow family traditions. Sometimes we also see children who harbour very early keen ambitions for what they want to do in life, and they adopt clear study and career paths.  For others opportunism matters more than a concerted plan.  Then there are a few of us – Lally Brown is one - who have discarded sensible plans to let fate take its course.

That is how I ended up as a foreign aid and development worker – a practitioner “in the field” – and not a desk-bound administrator as once seemed to be my lot in life. I remember exactly where and how it happened too. I was not supposed to be there and I was most certainly not expected to be doing what I was doing.

Oddly though it did make sense and all my previous study and experience had prepared me for it.

My degree course was in Business Studies, one of the first vocationally-orientated academic studies, and within the subjects on offer, it was human behavioural ones that fascinated me.  I paid close attention to Social Psychology and Sociology.  Mind you I still intended on graduating to go in to the real world of work and to make a living.  Then being in the right place at the right time, instead of scattering around the country and world like my fellow graduates at Kingston, I crossed Penrhyn Road yards away to join Surrey County Council.*  The scruffy student became a less scruffy local government worker but with a plum job of studying how people work.


Even today there are only really two approaches to how people work. One is about technical ways of doing things, often based on equipment and processes. The other is about what motivates people to work, to do their best, or not to. They’re both lumped in to the modern catch-all term and profession called “human resources” management.  I’ve never stopped studying how people work.

Now I could have just done that for 40 years or so and done very well for myself but for two factors. Firstly I always wanted to see more of the world and County Hall buildings in Kingston, Exeter and Dorchester didn’t provide much of that.  Secondly a new Boss arrived. It was quickly apparent that it was best he and I parted company. So we did.

So that is why I know exactly where and how my foreign aid career came about.  I was on Saint Helena Island in the South Atlantic Ocean, Many people said I should not have been there including my former colleagues at County Hall. But there I was trying to teach not-so-Saintly children at Country School.  A few more people would say I should not have been trying to do such a thing, myself included. I do acknowledge though it was excellent grounding for training Cambodia's most senior officials in good governance. 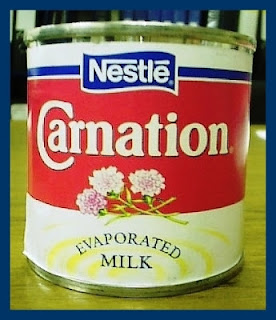 There I was on a fateful day with a tin of Carnation Evaporated Milk.  My laughter was drowned out as it would be by the guffaws of the late great Stedson George, our Head Teacher. It was my first encounter of many in a lifetime with foreign aid donors, plus their fickleness and sheer stupidity.

As I said above my studies and experience proved to be good preparation for such a career.  Today there are many formal avenues for both academic study for and career-entry in to the mega-industrial complex world of Foreign Aid.  We see its “greasy-poles” being ascended with consummate ease.  Like many professions the rewards at the top greatly outweigh those enjoyed by the lower ranks. Unlike most other professions there is by far and away the greatest of disconnects with its clients, or should we say from them?

A doctor to be a good doctor must treat patients.  A lawyer to be a good lawyer must be of service to people needing help to navigate rule of law.  A teacher to be a good teacher must impart knowledge to students or encourage its acquisition through self-learning and research. Most professionals, usually over many years, ascend their greasy-poles to positions of seniority and  the most ambitious arrive at the top in to administrative or managerial positions.  Even then they are seldom far removed from their erstwhile clients. 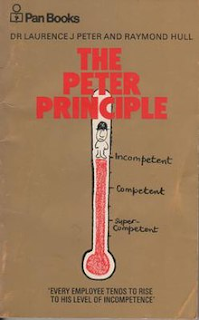 Nothing could be more different than in #foreignaid for professionals, where incidentally non-professionals carry even more weight.  Now here I am talking about two breeds of professionals, salaried workers.  Firstly foreigners - they pass through developing countries at various points in their careers. The most “successful” of them end up in jobs back home.  Secondly locally-hired aid and development workers – they acquire similar penchants as fixers for their foreign colleagues, one is a distinct preference for working in the capital cities of developing countries. Either way the actual engagement with clients – the poor, vulnerable, disadvantaged and disempowered – is minimal. Even the urban poor - despite being close physically - are worlds apart in all other respects.

Tours of duty or contracts are usually for short durations of two years, far shorter in the world of lucrative consultancies that have a habit of reviewing peers and reinforcing their own existences.  The greasy-pole demands you climb up before you are found out, often called the "Peter Principle".  Only “oddballs” or “misfits” don’t or can’t make it.

The truth is there are very few actual practitioners in the field carrying out foreign aid work. Most “funding streams” and “projects” are designed faraway: in London, Washington, Brussels, Beijing etc. Yesterday’s former practitioners may have say but certainly not today’s practitioners and as for the clients well, as I have heard it said over and over again, “What do they know?”

These self-styled Foreign Aid experts would of course point to their credentials and voluminous reports, characteristic of "Foreign Aid". Yet close scrutiny of them shows that mostly the authors are from the same self-perpetuating inner-circles of external experts, writing from afar. Seldom are such studies grounded locally. One exception is Meas Nee's excellent "Roads to Development" of Sre Ambel, Cambodia. It is an excellent advert for "Smarter Aid, not More Aid".
One of the strangest habits of these "development" experts is they tend to do the exact opposite of development that should mean handing over to whoever you are developing.  Many years ago I wrote an article about "sustainability".  Many of the same international NGOs I had in mind then are still in Cambodia after 20-30 years with little handing over to local NGOs or authorities.  (I think I still hold the record for localising three INGOs.)

Let me return to “human resources”.  I too have held top Country Director or Advisor jobs in Lilongwe, Kigali and Phnom Penh. However unlike most who occupy those posts, I have always spent most of my time every month without fail in the field.  In fact I even moved HQs to provincial bases away from the comforts of Phnom Penh, much to the displeasure of some local staff.  I choose stay in direct touch with clients continuously who can be inspiring and with junior local staff in the field.  I know no other way of keeping abreast of “what motivates people to work, to do their best” local staff and most importantly our clients. (Known also as, to use the horrible foreign aid phrase we have to use, “beneficiaries, often with "target” affixed.) 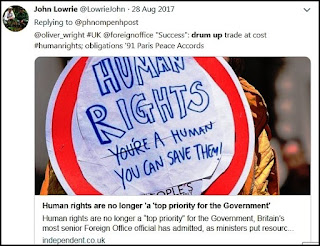 Interestingly too, given that I have been privileged to work in two countries with greatest human tragedies, “HR” also means “human rights”. This is where I part company in the most hostile way from the United Kingdom and other donor countries.  Since the 2010 coalition government led by David Cameron but continued to this day by Theresa May – more so to drum up post-BREXIT trade – human rights in reality is no longer prioritised.  It is often abandoned. Usually lip-service is paid to maintain appearances but that is all.

Well all I can say is if any person or a group of people is treated badly, or worse, please do not expect them to try their best in whatever they do. Whatever foreign aid interventions are designed on their behalf, including private sector investments, they simply will not work well if at all. Nowhere is that more obvious than with Saint Helenians, at home on their Island, or having gone abroad for work.  Most don't feel that they have ever had a good deal from the British Government. It's no different in Cambodia wherever communities keep losing their land, without proper consultation or compensation.

Cruelty has the opposite effect on motivating people to try their best.  The #Foreignaid greasy-pole should tell you that!


John Lowrie is a human resources officer by profession. He has been an aid and development worker since 1985, working in five developing countries, and Cambodia since 1998 where he has been country representative of three international NGOs and formal adviser to seven local development and human rights organizations. 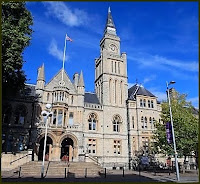 *   My local government career actually began in 1970 when as part of my degree course I worked for 6 months for the London Borough of Ealing.

My most popular blog on #Foreignaid as in the banner above is "Smarter Aid, not more Aid" now it has passed 50,000 viewings worldwide. For more on "The Trouble with Aid" please read up here on Nate's experience and exit from the #foreignaid scene.

Very often challenging conventional wisdom of #foreignaid is fraught with problems, the most obvious one when voicing it to be most unpopular, even ostracized by colleagues "who go with the flow".  No doubt this happened when questioning a favourite destination for donor funds in Cambodia - the social affairs sector. This is discussed in my blog "Care(less) in the Community" where complete amateurs from abroad dabble in areas where they would not be allowed in their home countries. At times I was a lone voice but time has proved that people like me have been proved right - for example in overseas adoptions, dubious orphanages and voluntourism.

Having posted this blog, putting it out there, for a response I decided to re-check for an earlier response I made to DEVEX the foreign aid community website that I think on the whole is quite good for raising issues and debate. However, when it comes to encouraging and facilitating entry in to #foreignaid as a career, guess what?  Who are they addressing - certainly very few folks in "developing"countries. And - as if to illustrate my main point in this blog - check out the tips - apparently any connection with real practitioners in the field as with actual beneficiaries of development projects does not feature at all! 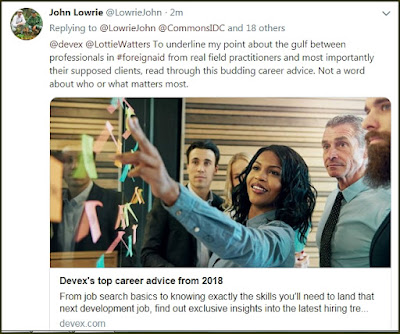 My series of tweets to make the point that #ForeignAid decisions are rarely if ever made by professional practitioners in the field or by beneficiaries. 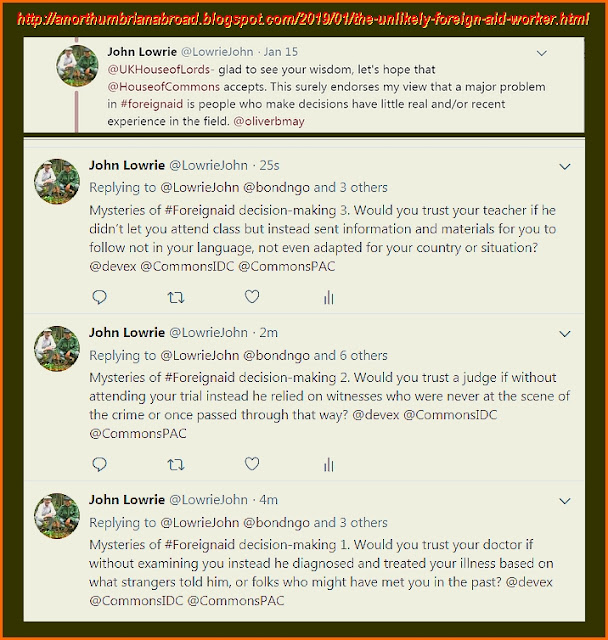