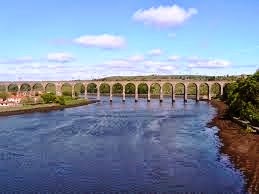 Photo: flettrek.wordpress.com
Built to Last.  Robert Stephenson’s 28 Arch English/Scottish Border Bridge has lasted since 1850. An earlier bridge nearby over the River Tweed is also proving its longevity with a little modern help.


In most professions like doctors, lawyers, and teachers, practitioners maintain direct or close contact with clients even after attaining leadership positions.  In Foreign Aid almost all top professionals are as far removed as possible from clients in all respects. Some may once have been practitioners in the field, but the system and culture soon elevates them away, to seniority in capitals in developing countries, with the most successful back to home countries and aid agency HQs. Does this disconnect between professionals and their clients in #foreignaid help to explain its ineffectiveness?  (The Unlikely Aid Worker)

Why is longevity elusive to and and development professions?

Whenever I am home in Northumberland and watching TV, I keep seeing numerous advertisements from charities.  They follow the same style.  They depict pictures of hardship to evoke pity and ask you to hand over cash.  If you do not feel guilty when not doing so, you may take comfort in that your tax has helped the UK Government to meet its over-generous commitment to devote 0.7% of GDP to overseas aid, and thus claim moral leadership among the world’s rich nations.

Some celebrity donors around the world learned the hard way.

They were disappointed when it emerged things were not as presented to them for their desire to do something about “Human Trafficking”.  Despite advice from inside people like me, lessons seem not to have been learned. (For that story please see this CNN clip.)

I have been at both ends of the wide aid and development spectrum.  First there was Saint Helena, a tiny island, population around 5,000.  Now there is Cambodia, 15 million today, and though far in size from countries also grant-aided with larger populations, it is almost certainly the one that has received the most intensive; costly and continuous aid intervention since it started in 1993.  Both recipients in this sense are at the top of the most grant-aided nations per head of population.

Personally I would say that both are object lessons in how not to do “aid and development”.  Basically after decades of support, neither population - despite those massive interventions - has attained self-reliance. For many, their world is "Upside-down, inside-out and roundabout!"

We really should try other ways to do aid, at the same time get rid of the jargon that cannot be conveyed properly in local languages and contexts!

In recent weeks, two authoritative reports, are saying the same thing as I started to say years ago. I will admit to being most unpopular with some representatives of donors and large international agencies for saying so.  My original article questioning Aid “Sustainability” (development-speak for "built-to-last") is still often accessed from various websites.

The first of these two new reports comes from the UK’s reputable ODI that is usually a trusted insider – well done to them for changing tack.  One quote is apt "Supporting change that reflects local realities and is locally-led"

The second report is actually a series of seven parts for development forum “Devex” “Foreign aideffectiveness: A radical rethink,” by Diana Ohlbaum — a former deputy director of USAID's Office of Transition Initiatives.  Here is one more apt quote: "Where there's little or no government will for change benefiting the population building capacity is doomed to fail"

In Cambodia, government and NGO officials alike are addicted to overseas aid.  It has been lucrative for them.  As Sophal Ear comments, aid has actually prevented citizens from holding their government to account. They would be better able to do so, if there was a direct link between service provision and payment of taxes or fees. Instead that link especially in education, health and social services, is in the form of a free hand-out from rich donors!


http://anorthumbrianabroad.blogspot.com/2019/01/the-unlikely-foreign-aid-worker.html
Donor fatigue though is beginning to set in. The vast NGO sector must contract. It is far too large. There are too many duplications – repeating the same work again, revisiting areas supposedly served before. The best of NGOs and NGO practice in Cambodia is great, but there is too much mediocrity, so the challenge is to retain the best and lose the rest. Before they depart or scale down, donors in my view should be seeking to help NGOs to merge and to operate leaner, in order that funds are better used.  That means leaving most if not all things to locally-managed organizations, and not imposing daft decisions on them. (I blog about one in Alnwickdotes No 4.) True, there will be "seepages" but then they exist now, despite the vast army of expatriate adminstrators, project managers, technical advisers, and evaluators - the Lords and Ladies of Poverty!

But I bet someone will be saying this again in 5 years, 10 years, 20 years in Cambodia and Saint Helena! Too many in #foreignaid conform, not enough perform. 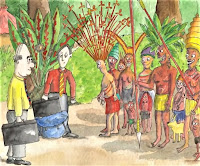 Many a true word spoken in jest.

Here is an amusing commentary about "foreign aid".

Please also tune in to this short video from Survival  Although it is about indigenous people, the sardonic but veritable points made - especially the Foreign Aid jargon applies equally to other "beneficiary" groups. This development-speak by the way is well embraced by addicts of Foreign Aid, not just its purveyors.

For a recent article I wrote for and about Saint Helena on this subject, please go here.

Sustainability is the Name of the Game but does the last player count? 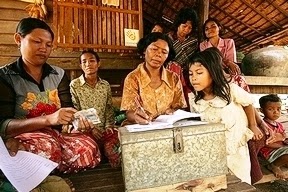 “It’s the money that matters”, but do these Aid beneficiaries, the final players in “Sustainability – the Name of the Game”, get what they need to be sustainable?  Do most people know that only a minute fraction of their charitable or tax-payer-funded donation actually ends up with the intended beneficiaries?  The rest is swallowed up on the way.  Perversely, when poor vulnerable people are entrusted and empowered to decide what to do with the money; what solutions work best for them, at least 85% make the right decision!

In this blog I devote most attention to the major players in Foreign Aid, the donors and top influencers. Leigh Matthews adds a new dimension in her series of "Do-Gooder" interviews, how ordinary people as tourists, as charity-givers, and even as first-time junior workers abroad can be more enlightened. All of them can benefit from listening to others who have gone before including learning from "our" mistakes. (I can count myself as one.)  They're quite long podbasts but well worth listening. The main aim is better child protection, but what she and her colleagues recommend also makes for better foreign aid, better use of your money and your generosity.  For more, please access their book "Modern-Day Slavery and Orphangae Tourism".

I took issue with the UK Daily Mail latest “revelation” supporting its quest against taxpayers' money spent on foreign aid.  The newspaper has been equally hostile to my friends on Saint Helena with reports of child abuse on the island (found to be exaggerated) and its UK Aid-funded airport (labelled by tabloids as "World's most useless airport" when regular flights were delayed due to unanticipated wind-shear affecting safety).

Readers must judge for themselves about the quality; accuracy and fairness of such journalism, but sadly the post-Leveson Press watchdog sees nothing wrong with it.  Apparently “balance” is no longer needed.  My view is vulnerable people are denied an equal voice to correct mis-impressions, whether they include the ever-loyal pro-UK Saint Helenians, or the much more numerous and disempowered world’s poor.

The basic charge made by the Daily Mail is that direct cash payments to the world’s poor is inappropriate and a misuse of aid money.  The fact is it can be a highly effective and the most economic way of delivering cash and benefits to the poor cutting out the vastly more expensive conventional models. I refer here of course to the usual system administered by and through Lords and Ladies of Poverty.  (I set out for the Daily Mail and IPSO the entire series of steps from inception of donor aid programmes right through to their conclusion and aftermath, a process that costs vastly more than whatever sum ends up with AND is retained by the poor.)

My main point, based on my personal experience with community-based self-help groups of the world’s poorest and most marginalised citizens, is that actually once they have the money in their hands, they actually make good use of it. On average 85%* (see update 4 July 2019 below), I have found do so.  High overheads; leakage, even fraud is far more likely to occur among the ranks of salaried NGO or public officials entrusted with roles over them. I also cited articles making similar points: “Just Give the Godam Fish” and one in foreign aid information network Devex. Shouldn't the Daily Mail reflect such opinions?

By chance, within a few days reputable body ICAI endorsed the viewpoint that these cash payments can be an effective mechanism. Although this was taken up by the BBC; Guardian, etc., the Daily Mail did not oblige.

Unfortunately the Daily Mail and its readership don’t need to know about alternative information that could influence their views about foreign aid; its benefits, etc.

All this comes at a time when US President Donald J Trump is attacking media projecting cynicism about its value, despite it being vital to any well-functioning  democracy.  Journalism per se and freedom of expression are taken for granted too easily in the West, but it still costs lives elsewhere.  In this case, quality journalism is simply dealt self-inflicted blows by the Daily Mail.

A great end-of-year round-up from @devex of headlines in the UK tabloids and their stance on Foreign Aid.

Worthy article "Are Grants for Losers?" by Felix Dodds and Minu Hemmati but is is for "Top-downers". Scroll down to comments below to see my observation as also added to the article.

A thoughtful contribution to the debate from Mary Anne Clements.and colleagues.  Definitely much more "solidarity" in #foreignaid would make for more smarter pro-poor aid as well help to address the moral cultural deficiency.

Similarly it makes sense to allocate adequate resources to any enterprise in order for it to succeed. We could be talking about a commercial venture or one for the public good.  Here an issue I refer to "core costs" comes up in relation to UK charities. They need enough funding to operate properly and efficiently, not just for direct services to beneficiaries. I have commended the writer  Gareth Jones as it is "smarter aid" not just for UK charities but small NGOs in developing countries where donors often do not allow core costs in budget plans or limit them artificially. Lack of core costs, to pay essential running costs and salaries, is often why some NGOs resort to financial malfeasance.

Excellent discussion on BBC about micro-credit.  In my text I referred to 85% of loans always paid back.  These ladies reported 97%. Worth downloading the podcast.