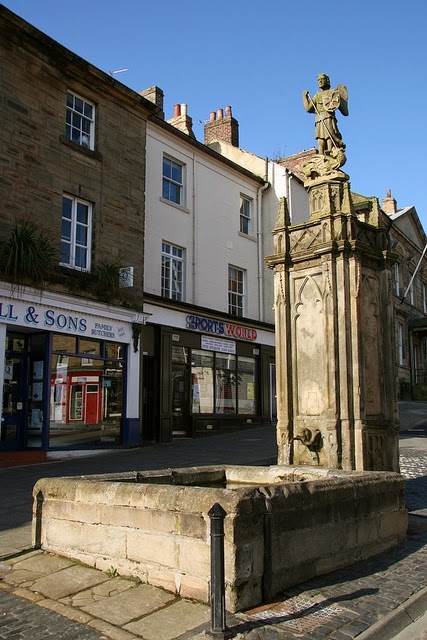 
Back in the 1950s, most children around Alnwick would have visited St Michael’s pant.  We certainly drank the water, and with reluctance we would throw a copper coin in, wishing we could take back one of the silver ones already there.

Alnwick’s pants tell a story of how the town learned a lesson the hard way.  Even today in 2015 that lesson is still being learned around the world.  As a quick read about the pants reveals, it was a major cholera outbreak in 1849 that led to clean piped water.

I had recall to this story just a few weeks ago, in relation to a tiny remote village called Srae Thom in Mondulkiri, Cambodia.  The community wanted just US$500 (UK£340) to repair a dam and their gravity-fed piped water system to their village.  It would give families clean water; irrigate their home gardens, and save fetching and carrying of heavy buckets over the five kilometer distance.


Guess what?  Our donor refused to allow us to use their grant for the request.  Their representative explained “Somewhere in Africa, a water tower constructed with our funds fell over and killed someone.  Since then, we have instituted very stringent rules concerning any construction”.  I responded by explaining not just with Alnwick’s experience but Haiti’s more recent one.  In Haiti, after the earthquake disaster in 2010, there followed a major cholera outbreak.  This originated from unsafe conditions for sewage at a United Nations Nepalese Military camp.  The well-intentioned folks there to help solve the crisis, made it far worse by contaminating groundwater to Haitians already with homes destroyed, relatives perished, etc.

But our response was to no avail. Eventually, rather than pursue a futile argument, we provided the money from our own small unrestricted funds.  So hopefully Srae Thom will not be added to Alnwick or Haiti in the list of cholera-hit places.  Let’s hope they will have no water-borne infections. May they enjoy instead better food security.  If not, as with some poor folks not far from me, they would have no choice other than to place their faith in the spirits! 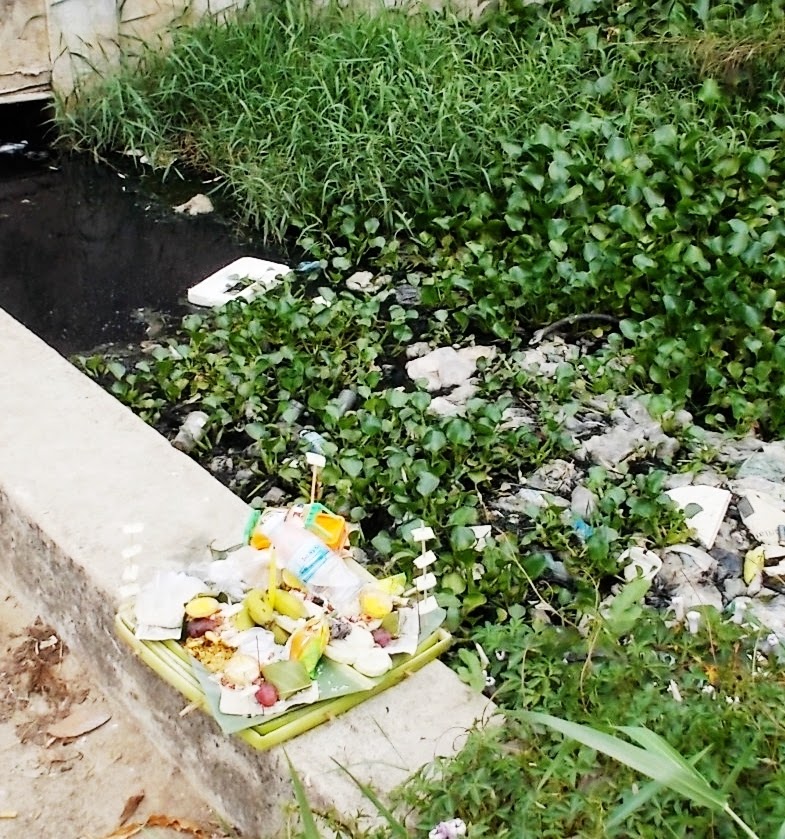 An offering to the spirits to ward off dangers to folks from the black water of this open fetid sewer! 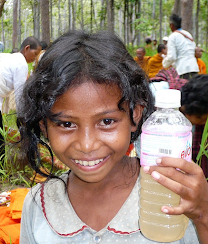 One of my favourite photographs in Cambodia says so much.  We were far in to what was still a natural forest with Buddhist monks there to bless the trees in the hope that loggers wouldn't take them.  They did take them of course.  The nearest settlement was miles away but somehow this little girl appeared, keen to show that she too could be like these strange visitors with her bottle of water, as sign of being well-to-do.  as you can see her water did not come from some pristine source, and how did she acquire her bottle?  Someone had dumped it.
December 2015 - An Update

Followers of my Twitter account will have seen my recent remonstrations to authorities.  They have created vast stagnant mosquito-infested and sewage-polluted areas of water.  Why? Well they have money to improve the roads, but not enough for culverts to maintain natural drainage.  They also have money to counter malaria and dengue fever.  They are supposed to be concerned about growing resistance to antibiotics. Somehow officials can't get their act together.  See what I sent to the UK Government after it pledged up to an extra £1b to the Global fund for HIV,AIDs, Malaria and TB, no doubt much entrusted to the same officials! (By the way, needless to say, no reply from HM Gov!)

"Please note two of me recent tweets (image attached) where I make the point that without “joined-up” thinking and political will, much of that money will be wasted.....again!  Here you can see bad road construction creating vast mosquito-breeding grounds, and of worst impart for the whole world, the universal practice in this region of mis-prescription of antibiotics, that is also fuelling Artemisinin resistance - the irreplaceable main anti-malarial therapy."

At the same time, I want to turn the title of this blog around to remonstrate about the same donor who refused to let us use $500 for an essential minor water improvement.  That donor incurred my wrath when my NGO's bid in answer to an open call for proposals missed out.  They wanted an NGO with experience of creative arts for health education to counter malaria.  We were the first in Cambodia to be doing this for many years; pioneering the methodology from 2002, renowned for it and had already applied it in their target area of the Mondulkiri/Kratie border.  They chose an NGO new to the field and area, perhaps as their personnel had accents similar to theirs?  That is of course more important than being conversant in the local ethnic minority languages!

21st Century solutions that don't last? Who's to blame?

We were invited to submit an "Information/Communications Technology" proposal for just four months for indigenous ethnic minority students, like the Jarai school-girls pictured.  It took a lot of work but we came up with a proposal that we could complete in the time-frame and that could be continued to help many more indigenous students over the years with the splendid new equipment (laptops).  The girls would also learn from their Bunong peers how to digitally record cultural stories and traditions.  These were always handed down through the generations by word-of-mouth using the spoken-only language.  However in today's age, there is much less opportunity for this.  So there is danger of valuable knowledge being lost,  Capturing it on video is a fun way to preserve it.  You can read more about this on my website.

Guess what?  We were turned down as the project is not "sustainable".  By that they want other donors to pick up the tab to guarantee continuing the training in future. They will not give us time to persuade them and to reallocate our revenue sources.  Like too many donors, this one would not allow salaries and running or essential "core" costs to be included in this proposal - as if by asking you are committing a mortal sin.  On the contrary solidly run NGOs are the key to "Sustainability".

And yet, strangely this donor was prepared to pay the exorbitant costs of full legal software licenses!  They are also keener to support paying for vehicles of certain manufacturers for organizations close to them.  You see so many of them with the logo and slogan.  No problem with sustainability there!

Whiling away an hour or two from within the Dirty Bottles. Not much is made about this feature of the pub, a splendid view, watching the world go by and reflecting on what Alnwick's oldest pant has observed over the years. ("Scene of disgraceful brawling and drunkenness?") 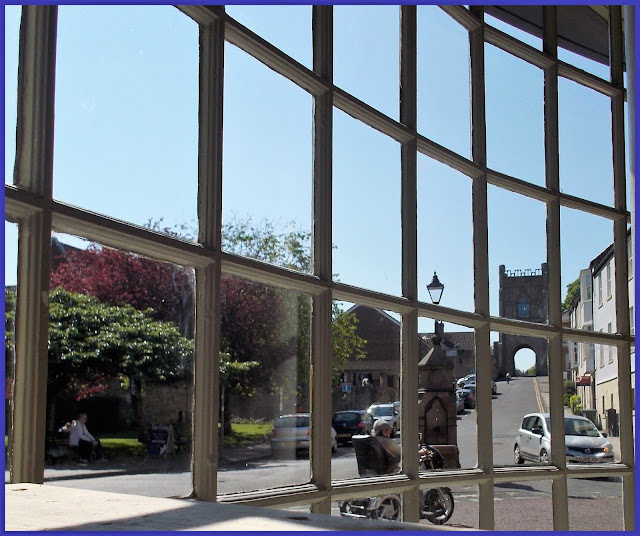