As dark as possible helps astronomy but not politics!

(Kielder Water exemplifies where modern development, environmental issues, and local people’s interests work together to benefit all.  You can read more on this other blog)

Why did a Cambodian Civil Society Analyst die?

Probably we will never know the real motive, but what he said and stood for must have upset someone.


Restrictions on freedom of speech and paranoiac reactions to criticism were certainly not invented in Cambodia, as the posters and their stories illustrate, but they do have one more important twist.

An Op Ed I drafted has not so far been taken up for publication, so I offer this blog instead as my tribute to Kem Ley.  The Op Ed began with a story:

“Where did you get that idea from?” asked disapprovingly the senior official.  The members of his entourage dutifully nodded approvingly of the question, but not one spoke.  They all stared back at me in silence.  So I answered “Well, Your Excellency, it is in your ministry’s strategic plan!”.  (Needless to say this latest fine works had been produced again by a visiting Australian expert.)  Before I had the chance to show the “offending” pages, he got up and left without a word.  He had lost face.

In essence “losing face” is what led to Dr Kem Ley’s slaying. He had a knack of telling telling stories (like this one just before he died.)

The arbitrary killing shares the same perverse atrocious logic as the "honour killing" of Qandeel Baloch in Pakistan. 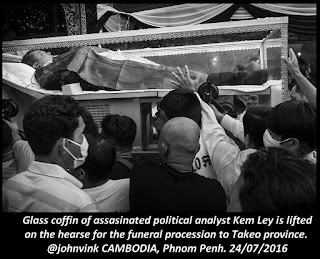 Somebody saw Kem Ley's "careless" talk as a threat to the nation.  Others saw it as "loose" talk to be silenced at any cost and to serve as a lethal warning to others, just as the poster above from the Troubles in Northern Ireland gave the same chilling warning. The Chinese idiom comes to mind too "killing the chicken to scare the monkey".

At the heart of the dilemma is what kind of a country Cambodia is and should be?  It has never known anything but authoritarian rule.  It has only had fleeting experiences of the kind of democracy and free speech envisaged by most of the countries that signed the Paris Peace Accords in 1991.

For the entire period since those accords, parallel divergent paths have existed  On the one hand, there is the firm “we know best” leadership.  On the other are all the initiatives put forward and supported by the international community, the choice of a majority citizens as expressed consistently in elections, for more inclusive governance.

The strategic plan I mentioned above illustrates the point.  For many years it was written by an Australian and Australian-funded, with formal adoption in order to continue to receive funding.  It is probably fair to acknowledge that everyone shared the laudable aspirations to do good for the nation’s vulnerable people.  Unfortunately, in practice, the opposite keeps applying - as overseas adoptions; malfeasance in administration of state pensions; proliferation of dubious orphanages, and rounding up/incarceration of urban street-dwellers all illustrate.

The preaching differs from the practice.  Social welfare, or social work, is relegated to social order, as in "Law and Order".

No doubt part of the problem rests in the lack of real communication – with far too much jargon and highly academic English in original policy documents that is then supposed to be translated in to Khmer and other languages, to be understood and acted upon by all concerned.  (Subject of course to if there is the real will to do so.  Often that is missing.)

The saddest fact about the loss of Kem Ley is that he was one of the very few commentators and communicators who could shed light on complex issues, to make them understandable by Cambodians at all levels.

Like Kem Ley of late, was I correct, or to blame, for causing a senior official to lose face?  His entourage told me afterwards that I should have kept quiet, to spare him embarrassment, and to keep him blissfully in the dark.  They have never forgiven me. Would they have put him wise otherwise?  I doubt it, just as others won't risk doing so today with their superiors. But then who curses the darkness most? Kem Ley and his illuminating words were snuffed out all too soon!

Here is a good song featuring the late Kem Ley.
If you like this blog, you might also want read about "No good winking at a Sheila in the dark".

Amid the worldwide outbreak of he deadly coronovirus outbreak and everyone exhorted to "socially-distance" from each other, I liked this variation on this blog's theme. 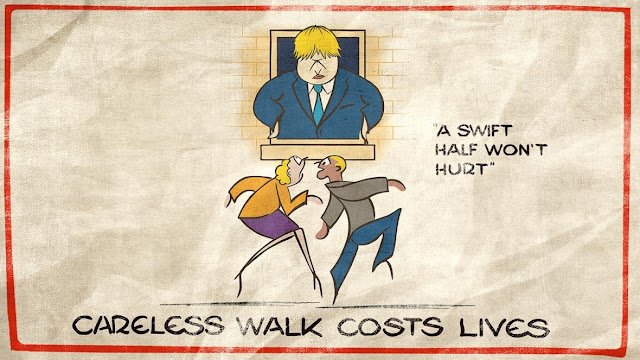 Well Phnom Penh certainly turned out in style to give Kem Ley a great send-off, as this Article and picture denotes.

This is the largest public rebuke of the Cambodian Government and its crackdown on all forms of opposition, including independent civil society advocates like Kem Ley.  Will the reaction be contrition, like the short-lived acknowledgement of being out-of-touch soon after the 2013 election?  Or will it be even more restrictions on freedoms? 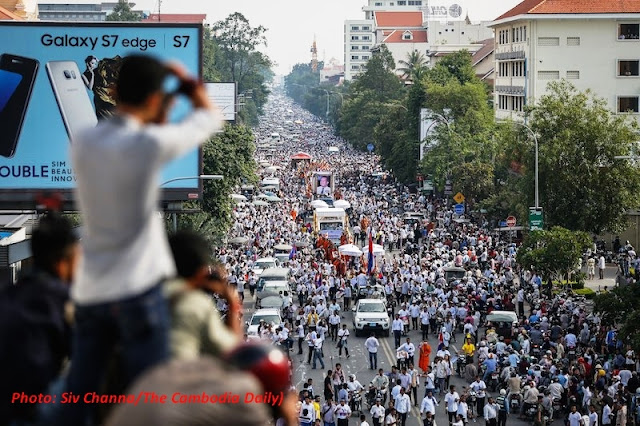