Development at all costs? The Areng Valley, too much dogma? 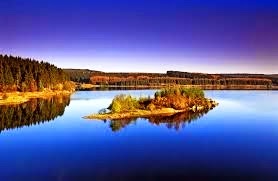 Development at all costs? The Areng Valley, too much dogma?

Kielder Water in Northumberland is a fantastic man-made but still natural resource. Not only has it fulfilled its original aim of guaranteeing water supplies to people, but it is now a treasured recreational facility and with the Kielder Forest, an abundant supply of sustainable timber.  I do remember though that there was controversy before it was approved for construction.  I went to see what would eventually be the new shore-line, as trees were felled. I have asked the Research Unit if they can remind me of the consultation processes that allowed the project to proceed. Today, I do not think there are many dissenters about its value and acceptability. (Even the humble salmon would agree.)


I wonder if that could be the case with the proposed dam for hydro-electricity power in the Areng Valley, Cambodia, in one of the few last pristine tropical forests.

Chong and Phor ethnic minorities, sometimes called Khmer Daeum, are affected and so far simply oppose the plan, or are advised to do that.


They are both linguistically and ethnically distinct from the Khmer majority, but their existence and culture is very much in doubt. Together with their related groups there are in total less than 10,000, with some of the groups numbering just a few hundred.  They need something or someone to help them survive.

Now let me state first of all that as a person who works with indigenous people, ethnic minorities, I am among the first to uphold their rights to determine what is best for them, given their long ancestry there.  The Cambodian Government should respect Article 29 of the United Nations Declaration on the Rights of Indigenous Peoples: “The right to the conservation and protection of the environment and productive capacity of their lands, or territories, and resources”.  So far this right has been consistently disregarded in pursuit of economic development with indigenous peoples especially displaced, and denied access to traditional lands for vast agro-industrial concessions, mineral extraction, and hydro-electric schemes, etc.

Yet in the case of the Areng Valley, I do ask if this could not be a mutually-beneficial project – one that is more likely than no project to help these minorities to survive and prosper?  Surely the Cardamoms are large enough for such a project, especially if at the same time it could help to restore some areas already spoiled?

1          The technical design of the project should be re-examined to see if the 2,000 hectare size and flooded area can be reduced while retaining the viability of project through the sale of power.  That could lead to less displacement than the planned 1,500 people.  It may be that earthworks can take place to reduce flooding of some valleys.

2          Full creative and constructive dialogue should take place with the Chong and Phor People.  They could, for example, be offered to retain the ownership of the new reserve of water stored on what is their land.  Then the electricity supply company would purchase it at a sensible rate to give them an income during the life of the project.  They would also own the fishing rights.  As with Kielder Water, if tourism develops, then they would have a controlling interest over how many visits, what types of activity, and where and how it would be allowed to impact on their traditional lives.

3          For those people unavoidably displaced, it is a question of giving them as many options as possible. Ideally authorities should help them to find alternative land of the same quality and the project pay the full costs of relocation.  Or the project should assist them in bringing that land up to standard.  They could be employed to move fauna and flora to be lost as waters rise.  Some may want to make their income from fishing in the long run.

What matters most is that is that they are fully consulted in the process, and the impact surveys fully reflect their interests, not just those of vested parties.

So far this is missing.  Is there too much dogma on both sides, the authorities and those claiming to promote the best interests of the people? 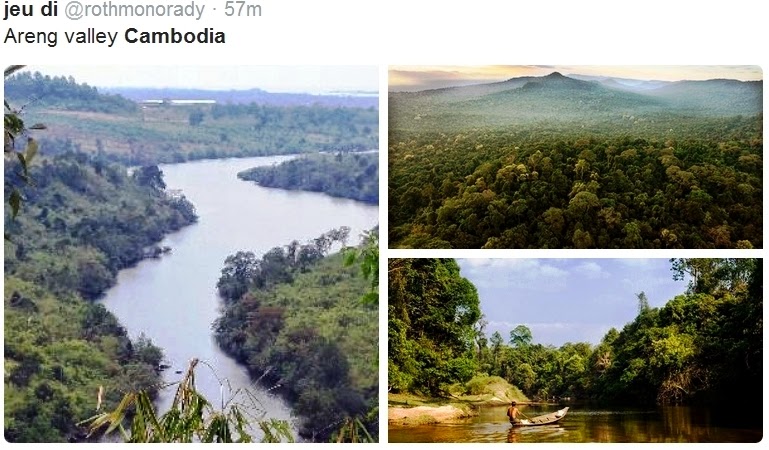 This article was first written for the Khmer Times, at its request, to try to balance publicity in the English Press, that only argued against any kind of development at all.  It should be read in conjunction with "More to Cambodia than Angkor Wat" that makes the case for indigenous minorities to be treasured instead of being cast aside.

One key factor that environmentalists must weigh up is that developing countries are entitled to more power to develop economies and create wealth.  Hydro-electricity is a clean form of energy but if it alters the nature of main rivers like the Mekong - its fishing grounds and flood-plain agriculture - it could have disastrous effects for millions.  Agreeing to a dam in the Areng Valley would lift some pressure for them on the main Mekong river or tributaries. (5 January 2016 - see this article.) 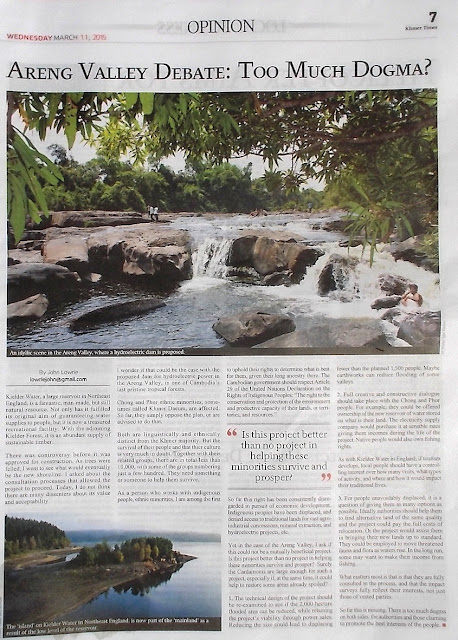 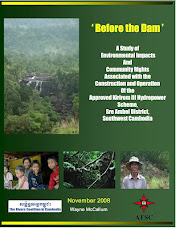 There is a precedent for this kind of construction with the Kirirom Dams in Sre Amrel in South West Cambodia.  Wayne McCallum conducted an in-depth study and made similar "constructive engagement" suggestions.
January 2018 Update

The proposal to build a dam has been cancelled in favour of a coal-fired plant- see story here.