The Trouble with "Aid", Nate's Exit.

In my blog last week, I referred to the decision of a fellow longtime "Aid" worker to give up in frustration. Was he sensing something now allowed in Aid circles (Failure?) Nate invited me to give a guest-post to go with his writings.  Here it is, as posted on his site.   If you would like a sound-track as you read, try "You really got a hold on me".

No good winking at a Sheila in the dark!

Most readers will have no idea what this means, least of all its relevance to “Life after Aid”.


Nate will have no problem.  I share with him 30 years in the Aid and Development business but our paths have not crossed until now.

And then what about nuances such as "See no evil, hear no evil, and speak no evil!"?

I understand Nate’s desire for a fulfilled “Life after Aid” or “Life despite Aid”.

Would life be better without Aid?  Some say “just give the poor the money”, cut out all the bureaucracy.

For my part, I ask again, for the umpteenth time “Why can’t find we find a way to communicate meaningfully with the world’s poor and vulnerable?”

“Why is so much money spent before any of it reaches the poor?  It is a fact that this is the case in almost all aid budgets?”  It is clearly a flawed process; top-down; expensive, with no guarantee at all of real benefit to the poor?  The only thing we know for certain is that many other people, none who are poor, do benefit disproportionately, on the way.

Now when Nate uses “Aid” in the short form instead of its usual double-barrel form, our United States colleagues will think we are referring to USAID.

I hope that USAID will not take too much offence (or is it offense?) if I pick on them.  If they do, then please be patient.  I am equally capable of offending UK, Australian, German and other “Aid” outfits.

Nate has questioned his impact and the impact all of us have in “Aid”.  He explains himself very well in his blogs. (Part 1, Part 2, Part 3.)  We hope that our efforts make a difference. We also hope for appreciation though this may not be forthcoming.  After I notified the Cambodian Government my NGO was handing over to a local NGO having accomplished its mission after 18 years, we received no acknowledgment at all. (This was the third INGO that I had successfully "localised" in Cambodia  a feat  unique to me.)  [* Please see correction below and my summary exit "Your mission is over. Go!"]

How do we judge impact in “Aid”?  Well it would help if we can have “both sides of the story”, not just one.

Internet searches are great, aren’t they?  Just enter in to your search engine “USAID and Success” and “USAID and Failure”.  What do you get?

For success, you get detailed guidance on how to write up “Success Stories”.
Similar guidance exists for compiling final reports to attest to the success of projects as a whole. Very often my task has been to complete the final reports that go to donors. Needless to say there is bound to be more emphasis on showing success for all concerned. Therefore for the final report to be accepted happily by the donor, you must portray fully the achievements.  One time I was chatting to a friend whose job was Report-Writer with one of our notable donors, a contractor of the big donor, that coordinated administration of its grants. I told him that I always felt uneasy about how we had to write up our reports, in particular the talking up of success and to play down failures.  He laughed. "What do you think my job is? I take all the reports of all grantees and further edit them."  For "Edit" read "Embellish", or to be accurate.... doubly-embellished.

Now while USAID gives detailed guidance on success stories you can easily access, for failure…..nothing, just a list of items, exhorting USAID to acknowledge that it does exist, but they go unanswered. (No mention that failures can be finger posts to success.)

The truth is donors, not just USAID, don’t want failures.  Taxpayers, they wager, are all “Sheilas”, best kept in the dark. If not, they may ask awkward questions like “value for money?”

Some people resent me for pointing out the annual cost the United States Government spends every year to deploy each of its Peace Corps volunteers.  (I do compliment the US for giving the figures.)  It worked out US$54,849 each volunteer in 2015.

That is an enormous cost from a development perspective in a world where the poverty mark is set at around $1.50 per day per person.

A few weeks ago, the social media rumour-mill (rumor-mill) was rife in Cambodia that the UN was forking out US$150,000 for a four month consultancy.  It is probably true.  There has been no denial.  I do know of one ICT consultant who offered me his services at a kindly-reduced fee of just $1,000 per day.

Around the same time, a USAID contractor blocked the plan of one of our most remote, poorest, indigenous community self-help groups, to spend $500 to repair their gravity-fed water supply system from the well up in the hills down to the village. “Somewhere in Africa, a water tower constructed with our funds fell over and killed someone” they explained “Since then, we have instituted very stringent rules concerning any construction”.

I had the temerity to question their edict but was firmly slapped down by USAID:

“USAID is not permitted to get involved with issues between a prime partner and a subawardee.  I'm not sure exactly what is being asked, but if you would like me to contact [xxxx] on your behalf, I am unable.”

Do these people – or those writing the rules - have any personal and direct experience of implementing development projects?

I persist in advocating the only process that really works. This is where you facilitate local people to produce their own solutions to what they regard as their development problems.

Unfortunately this does not fit in with the rationale of most “Aid experts” who dismiss the notion as heresy, or maybe I am just speaking an alien language?

Little wonder that many of us agree with Nate about “The trouble with Aid”.  "Gud on'yer mate!" Good luck in your after-life!

For the record, the title phrase will be readily understandable by folks familiar with Australian English.  It refers to a boy trying to attract a girl’s attention by winking his eye at her, but his effort is to no avail as she cannot see him in the dark.  He must switch the light on. It is an apt analogy in the aid and development business where donors and external development experts go about plying their missions, while leaving beneficiaries in the dark.

Up date May 2021
Excellent publication from Peace Direct much along the lines we espouse here. "Time to Decolonise Aid"

Other popular blogs about “Aid and Development”.

* Important Correction.  I must acknowledge that the Cambodian Government did in the end duly acknowledge our work.  Better late than never. We first notified them of our handing over/phasing out in 2014 as well as in our 2014 Annual Report. (Perspectives Page 24). However as I soon discovered in February 2018, there is absolutely no appreciation of my efforts. 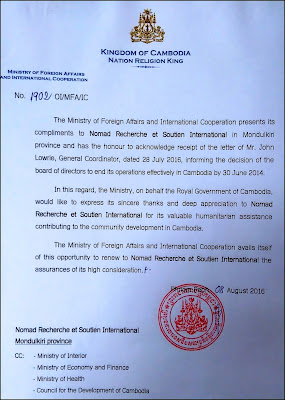