Built-in obsolescence, the personal kind, doing yourself out of a job

A recurring theme in my blogs is the unwillingness of many in the aid and development business to see that real success is "to do yourself out of a job".

That is personal, whether as development workers or any of the other fancier titles they hold up to "consultant", and organisational with many agencies never having proper exit plans to aim for.

I was pleased therefore that this point was taken up in this article about me.  At least nobody can say that I do not practice what I preach! (See also "The Unlikely Aid Worker.") 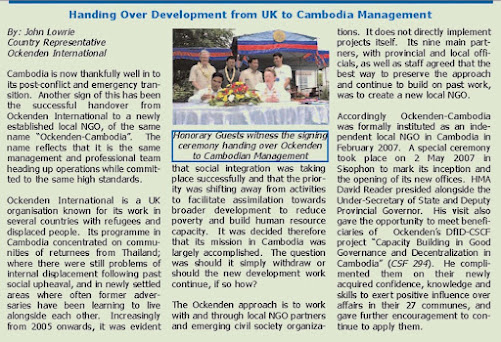 Ockenden-Cambodia was the second of the three former International NGOs that I was responsible for “localising”, i.e. handover in entirety to Cambodian management with their own Boards of Directors and Management Teams.

The years roll by; history repeats itself, we see the same things recurring over and over again. Development, the externally-led/funded variety, becomes a permanent institution rather than a carefully-managed stage in post-emergency recovering and developing countries. No wonder dependency ensues, becomes a norm.  I first mused about this in my “Sustainability – Name of Game” article that originally appeared in 2003) 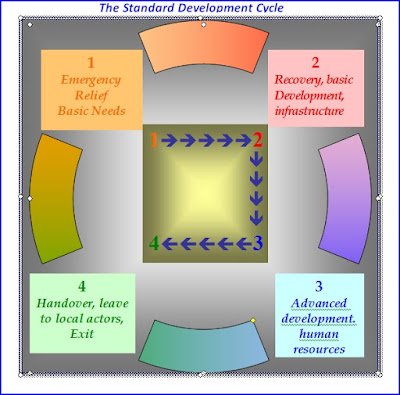 Policy-makers everywhere should be far more alert to the danger signs.  For example in Cambodia, if you take those two continuously supported and funded areas – good governance and human rights – you can see that there just isn’t real, tangible, measurable progress. There is just talk and repeated promises…. to keep the money coming in?

After the 2013 national elections, the ruling party was given a real shock – the opposition was close to winning, and perhaps would have done if the elections had been conducted fully freely and fairly. Soon after, still in shock, a very contrite subdued Prime Minister gave a 5 hour speech to his ministers and the country to “scrub themselves clean”.

Astute as ever, he soon realized that to take on his friends was much harder (and more dangerous) than his enemies, and so he set about “detecting, disrupting, and destroying” all forms of opposition, whether party political, or neutral civil society, anywhere where absolute loyalty could not be assured.

Yet strangely, too many people in the international community, especially in long-term external development projects, choose to disregard the phenomenon.  And as Sophal Ear warns in “Aid Dependence in Cambodia: How Foreign Assistance Undermines Democracy, if that means public services depend on aid money, not local taxes, how can citizens begin to hold their government to account?  It is simply counter-productive to good governance and real reform. It is a waste of aid money. It's throwing good money after bad, and ultimately that helps no-one, not least the poor.

This article can be viewed on the website here - go to Page 16. 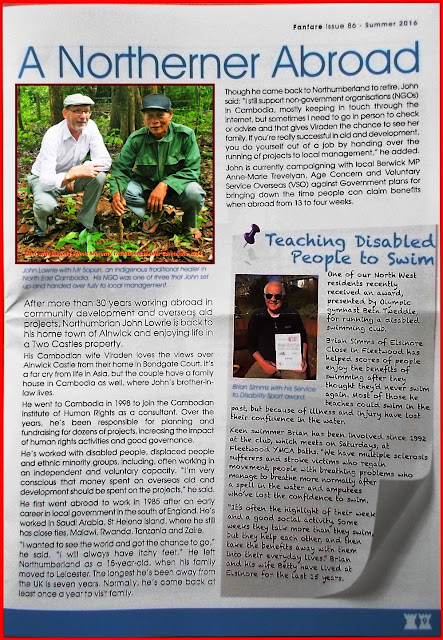 A group of genuine "local" NGOs exposes a new habit of INGOs appearing to hand over locally but in reality are only pretending to do so to tap extra funds and stay in business.  The real problem, and one that the big INGOs can exploit with their nimble professional fundraisers, is that donors come up with criteria in Calls for Proposals that makes it too easy for them - and harder for genuine local NGOs. See my tweets.

A couple of extra reflections:

1   Much media comment refers to a dictatorial leadership - Prime Minister Hun Sen may be an authoritarian leader, but he is far from having exclusive dictatorial powers.  In some ways he is a hostage to powerful forces around him.  Free to his own devices, he might have been more willing to make some reforms, but even then only ones that would position him or his personally trusted successor in power. Any other scenario would open up the possibility of the fate that has befallen many longtime rulers.

2   Back in 1998 I was one of many commentators who posed the question about whether it was better to have imperfect elections or none at all, for example in my paper about neutrality of security forces.   The run-up to the commune elections in 2017 and national elections in 2018 has pronounced similarities to 1997-98 in terms of conditions for free, fair and credible elections.  We can also draw on the experiences of the 2003 and 2008 elections.

I am now firmly of the view that we were wrong in 1998 and every five years since. No election is probably the only way to bring about the changes needed.  The threat of losing international legitimacy is probably the last best sanction available.