Alnwickdote: No 9 He died with a smile on his face!

Hexham Old Gaol was built between 1330 and 1333 and was used as a prison for almost 500 years. Alnwick’s 15th century Bondgate or Hotspur Tower was also a prison in post-medieval times.
Our most famous jail, or gaol, is Durham "a boarding house where ye divven't have to pay" hear about it from the High Level Ranters here.

When a former accountant colleague died, his family remarked upon his smile.  He and they were happy that in his later life he had provided well for each of them. In fact, they had done exceptionally well considering his salary was just a few hundred dollars a month.

Now we should not speak ill of the dead, so I will leave the thought with your imagination, or for cynics to submit "freedom of information" requests.  The saying reminds me of a similar idiom: "See no evil, hear no evil, speak no evil!"


This was put to me not so long ago in Northumberland, after an old school chum was convicted of misappropriating funds belonging to his organisation.  People connected with him felt let down; preferring not to talk about it.  I take the view that it is better to talk openly about wrongdoing, so things can be put right, and for transgressors to rehabilitate themselves.  At least in Northumberland, due process of law can take place, whereas in Cambodia, impunity is a far more likely outcome.

In this sense, "See no evil, hear no evil, speak no evil". could be yet another motto in the aid and development business.  In contrast, most donors profess otherwise.  “We have zero tolerance to corruption!”.  Yet in 17 years in Cambodia, and numerous cases, I have not seen one prosecution under what is a straightforward relevant law covering breach of trust - Article 391 of the Penal Code “When a person misappropriates money...that he or she accepted to be used in a specified way.”

In fact I have seen more “zero tolerance” to whistle-blowers, including when I was supposed to have blown the whistle.  Actually it was blown by our deceased accountant’s boss with his Christmas Day 8-page letter to donors, alleging systematic fraud over many years.

One time I most certainly did blow the whistle, but it was not well-received by either the donor commissioning the report or the "culprit". I had received a copy of an "independent" evaluation of 10 NGOs. However the author was the founder of one  of the 10 NGOs and still on its Board. This little fact was not declared although he singled out his NGO for praise no less than three times in his executive summary.  (A good journalist's guide to safe-guarding whistle-blowers can be accessed here.)

I must also plead guilty to warning the Country Representative of our major donor that there appeared to be control weaknesses. Now I was supposed to be an advisor but was actually No3 in seniority and as both the No1 and No2 enjoyed frequent absences away, it fell to me to authorize expenditure or to refuse to do so.  The first time I refused, lurking in the attached pile of vouchers [I was not supposed to flick through] was one made out to me for staying at a hotel by the seaside. The date was right but the hotel was wrong, in fact it didn't exist.  Another time I refused an entire planned training course in Pailin. The Accountant was bemused. "Why?". Well Pailin, the former Khmer Rouge stronghold. was small in terms of officials to train. "Because we've already trained everyone there!"

So let us return to that smile. A smile in Cambodia can denote several things.  It is often a sign of embarrassment and sometimes a nefarious expression.  Nicholas Shakespeare notes this in his article about when his father was UK Ambassador to Cambodia.  The then Prince (or King) Sihanouk’s friendly grin concealed a vein of ruthlessness. “We can smile,” he said of his people, “but we can also kill.” 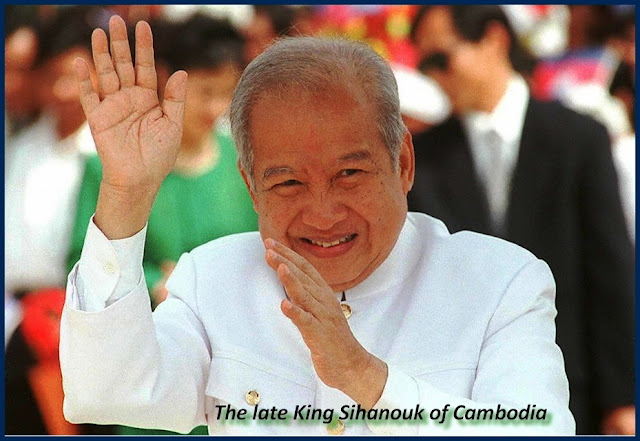 My favourite quotation of King Sihanouk, who I met around this time, is of course "In today's Cambodia, the God of Impunity reigns side by side with the King of Corruption."  He and hiis smile appear in one more blog here. My former colleague David Ayres reminded me of his favourite quote from King Sihanouk that ventured in to even more lurid detail. The smile on our accountant’s face is indelibly printed in my mind and probably that of another former colleague.  He and I had taken on roles – at the request of donors - to help auditors investigate the allegations in the Christmas Day message.  Some people resented our roles. We took them seriously, to try to find the truth, and to try to save the organisation doing highly-commendable work.  One day, the accountant entered our office, with that smile on his face.  “Do you know how much it costs to have someone killed?” Our two heads shook. “Just US$100!”  A couple of hours later he returned “I told you wrong; it is just US$80!”

Unfortunately neither of us could complete our task despite being close to accomplishment.  Inexplicably and suddenly one donor ended my colleague’s contract, so our mutual security pact ended.  And after I spotted the brakes being tampered with on the car, I decided it was time to exit.  Oddly, the donor who paid for my salary decided not to honour my entitlement to severance pay, while opting to take no action whatsoever against those who had purloined funds to which they were not entitled. (For another take on this story, please see “Guilty by association: the inaction of donors and NGOs”)  Many of the staff actually confessed to such behaviour, as recorded in the auditor’s report: “We note that.....both the finance manager and the finance staff agreed that they had been involved in the falsification process.”

My colleague had been booed at a staff meeting when he had told them “Donors do not like corruption! Just a few months later, all 100 of them lost jobs when the NGO closed.  There was of course many a wry smile.

And this is not the worst case I have personally encountered of seemingly serious financial misuse of taxpayers’ and charity-givers’ money, nor of the impunity created by "See no evil, hear no evil, speak no evil".  Is it only in Cambodia that an organisation set up to counter public corruption meets its demise due to internal corruption?

It is a matter of debate as to whether recent years have seen much improvement since the establishment of the Government's Anti-Corruption Unit and of the NGOs' umbrella group Cambodian Co-operation Committee's Governance and Professional Practice Code.  Personally I do not think the fundamental culture has changed; dishonest practice is deeply ingrained throughout systems.  From the time a mother gives birth, to when she registers her baby, to enrollment at school, to obtain a job, to access health-care, and all the way to a person's funeral arrangements, unofficial fees are paid.  Everyone expects to pay!  There is no political will to address this reality, and too many people are afraid to challenge it due to broken courage. As covered in other blogs, this is why wealth percolates up; it does not trickle down in Cambodia.

1   Public service is about government officials, elected or appointed, serving the people, not the other way around.
2   People should always be consulted beforehand about any decision that would affect them.

You can ask yourself on the date you are reading this if these two simple concepts exist in Cambodia!

If you are reading this blog and are interested in the follow-up work some of us are trying to do to improve ethics and effectiveness in #foreignaid, as well as my flagship "Smarter Aid" blog, you may want to read more recent blogs about "Malfeasance in Foreign Aid" and "When the cat's away....".

Please read this case posted by John Brown that is probably typical of widespread actual practice within Cambodia, as described in both public service and NGOs. As I have often reminded NGO leaders if they do  not put their own house in order they lack moral authority in everything they do.

In most countries to be confronted with what amounts to a death threat would shock but in Cambodia it is a feature of the political landscape ("If you are not my friend you are my enemy!") although you would not expect it within a human rights organisastion promoting a "Culture of Peace".  There were other tactics, for example:  One  close colleague was followed by armed men on a motor-cycle and men were posted for days by my wife's family home, two of whom she recognized as employees.  We were also also warned of "warm blood" and "cold blood" - that nothing may happen until the blood has cooled and you think the saga is over only for revenge to be exacted. As it happened, once we departed the situation, there were no more threats and in my case I went straight back in to working for human rights organisations.

There are archival records of some of CIHR's original human rights and good governance works:
http://www.hurights.or.jp/archives/human_rights_education_in_asian_schools/section2/2003/03/teaching-human-rights-in-cambodia.html