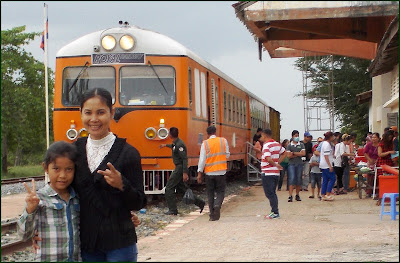 From Alnmouth, it’s possible to take a rail superbreak, transport and hotel all-in, anywhere in the UK.  We’ve been to Whitehaven in Cumberland and to Aberdeen where my Cambodian wife took a liking to the free Buck’s Fizz served at breakfast.  Oddly, the cost of these packages can be less than booking the fare-only.

So once Cambodia’s rail system was restored, I couldn’t resist the temptation. A trip to Kampot or Sihanoukville is a bit long for me, but Takeo just an hour and a half from Phnom Penh, was just the ticket.


Of course I do have some uneasiness as there is no doubt a lot of poor people have been displaced for this project, as in too many development projects.  In fact the Cambodia Daily reminded us of the problem as I post this blog.

Now if Royal Railways keeps up its excellent service, then surely the benefits must flow and reach everyone who has made sacrifices?

Clean, reliable, safe, very pleasant helpful if chatty staff – it doesn’t sound much like a lot of Cambodian transport does it?  When we arrived at Phnom Penh station for the off 3.00 pm Friday afternoon, we were serenaded to the ticket counter, then to the train, and on to the carriage, ICOM communications throughout.  All that for the princely sum of US$4 each adult and free for the 9 year old girl.  On time the train departed with its horn blaring, as it did throughout the journey – well it would, wouldn’t it, it is Cambodia after all.  Mind you, that horn is needed, as for the first few kilometers out the city, the train passes perilously close to all manner of urban-dwellers; traders; children; dogs and cattle - presumably none of them yet displaced nor in any way fearful of the dangers. 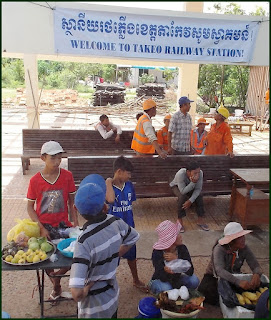 Takeo Railway station is undergoing renovation, and it must be still a novelty for people to alight there. There wasn’t an expected waiting melee of tuk-tuks and motodops.  We walked to the main road just over 5 minutes away. Then my wife made the usual mistake incurring my displeasure.  She negotiated two motodops fares to the Daunkeo guesthouse, fine.  They even had rudimentary helmets for us to wear.  But as I could see straightaway, although Mr Motodop Moy, said he knew where it was, his expression said otherwise.  As he took the lead, we were treated to a tour of Takeo; and numerous stops to ask people, to no avail, before I contacted my Aussie mate.  It is strange how foreigners, with or without a map can get from A to B more quickly.  In Phnom Penh, motodops navigate by “near” somewhere, not streets and numbers.  They will take you, for example, to “near Kirirom cinema” even though it closed years ago.  Takeo motodops have the same pedigree – so beware!  It is by the way about US$1 from the station, direct route about 2 kilometres, to the lakeside and the main concentration of guest-houses and restaurants.  There are tuk-tuks.  I suggest you book Daunkeo and ask them to arrange a tuk tuk to pick you up.

I had the pleasure of working in Takeo a few years ago, for its famous Eye Hospital, and have stayed in the town a few times, for me, for just one thing.  The Lobsters.  They never disappoint although I must confess to having them once at Neuk Loeung before the bridge was opened, and they were even finer. (There are other things to do in Takeo as the tourist website details.) 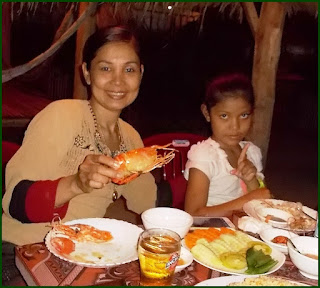 We had lobsters for dinner both evenings, working out at US$16 for three medium to large ones (0.6kg), although the well-heeled might opt for the big ones for $50 kg.  They were cooked to perfection. I had mine curried on the second night. And of course we had the usual impeccable, quizzical, and attentive service, helping me to wash them down with a few beers.

There are a lot of guesthouses in Takeo but relying on local Aussie knowledge we chose Daunkeo and it is very good by usual standards, with rooms from just US$6 per night.  We took breakfast in the nearby market – the Cham ladies do a very nice beef soup!

We arrived early for the homebound journey scheduled to leave at 11.50am Sunday.  The train was early but it still gave the wife time to be quizzed by the hawkers amid the roof repairs, and occasional falling tile around us.  As the builders had obligingly forsaken their hard helmets, I donned one just to be on the safe side. 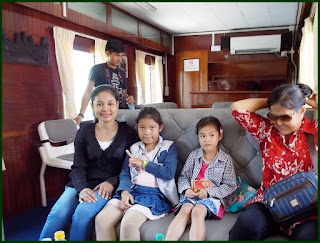 Rickety but new metal steps were quickly placed by the carriage doors.  Passengers descended to survey the delights on offer.  The conductor escorted us to the oldest carriage and a very fine specimen of French railway design, that he told me dates from 1932.  Soon we were underway to the same gentle pace as the first journey, rice field after rice field passing by. Little wonder Cambodians soon tired of the views.  Most were soon sleeping. Meanwhile my new self-appointed best friend, the conductor, decided to keep me entertained. 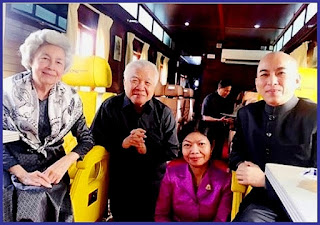 “Where you are sat..” he told me, pointing to the grey upholstery “is where Royalty and the Prime Minister sat!” So my posterior has shared the exact same spot as that of Samdech Akeak Moha Sena Padey Techo Hun Sen. “And Kings!”  He was quick to add.  He showed me what was the galley, now the staff-room.  The bar, as you see at the back  of the carriage (above), is available but it is a shame that no-one is operating it yet.

Kings Sihanouk and Sihamoni with Queen Monineath aboard the Royal Train: 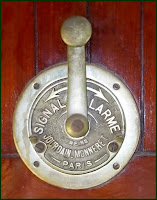 So I will end this blog by complimenting Royal Railways and the good folks of Takeo on our super break.  I remember back in 1998 when Siem Reap was equally unspoiled.  I expect Takeo will take off, but for now it remains a largely hidden gem.

Update 26 September 2016 from Alnwick in the UK

The Cambodian wife and I brought her two nephews for a holiday and to polish up their English skills.  One is a keen Arsenal supporter.  What best way to take them to London from Alnmouth than by superbreak - amazing value, just over £100 each (US$130), for return rail fares, and two nights in the newly-refurbished 4* Holiday Inn King's Cross/Bloombury. 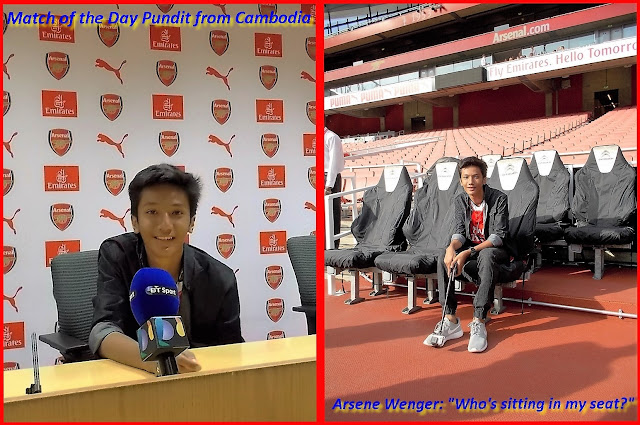