Failures are finger-posts on the road to….achievement!


"Failures, repeated failures, are finger posts on the road to achievement. One fails forward toward success" attributed to C. S. Lewis and Charles F. Kettering

We had just left Northumberland, but I couldn’t help spotting this worldly advice in Worcestershire - clearly a sign for something to write about?

What a week it has been.  So now we are back in Cambodia after two months in the UK.

It is a welcome relief to escape from the trivia such as the “[Jeremy] Corbyn monoxide poisoning campaign". The “newspaper”, picked up as we entered the plane at Heathrow, was “exposing” that he once had a brief relationship with fellow MP and now a member of his shadow cabinet, Dianne Abbot, who has the international aid brief.  (I hope that she is not saddled by actually knowing something about the subject!)  Isn’t it strange how the right-leaning press conveniently forgets to remind readers that a Conservative Prime Minister, John Major, actually had an extra-marital affair while in office, with Cabinet Minister, Edwina Currie. 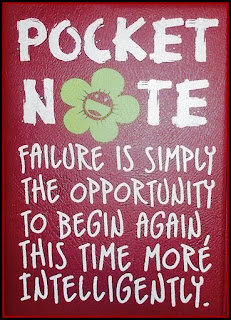 Meanwhile 1: Saint Helena received its first airplane flight at its brand new airport.  If ever there is a place and people who know a thing or two about failure – in the development aid business – it is Saint Helena.  Let us hope that it all works out fine and we do not have another Norfolk Island development disaster!

Meanwhile 2: Cambodia’s new United Nations Rapportuer on Human Rights – Rhona Smith from Newcastle University – is making her first official visit.  .  Let us hope that this too all works out well, and that she will be able to accomplish real achievement that eluded all of her predecessors.

And so it is back to work and life in Cambodia for a few months.  And you see what greets us?

Authorities decided to give us a new road.  Yet no-one did the basic groundwork, like checking on drainage and installing culverts.  So neighbours with low-lying houses are flooded.  Now I wonder if the problem will be put right?  Will lessons be learned for next time?

Lessons should be learned, not only for the sage advice of this blog title to hold true, but also for the ruling party to show that it really does intend to govern better.

Somehow I doubt it.  Words are spoken. Promises are made. Commitments (in writing) are solemnly given.....and invariably broken.  As I have written elsewhere, four years of teaching good governance to senior public officials taught us two things. (1) Most officials know already what good governance is. (2) They also know that there is absolutely no political will to embrace it.  Things could and should be better for Cambodians, especially the poor and vulnerable. Haven't they endured too much failure and tragedy?

Yet, I still maintain that this adage will hold true, eventually, as the young Cambodians with their smartphones - the one "must-have" possession they want before flush-toilets - can see the outside world in ways denied to their parents and grandparents.  They do see around them amid admittedly some progress (for some) against manifest failures for most.  These "finger-posts" are pointing them in the right direction.  The ruling party should wise up to recognize the signs!

And fnally...... accepting failure as an essential feature towards success is anathema to donors.  One in particular grooms its grantees to report only success!