The best person for the job?


“You should get the best person to do a job” I found myself saying yet again last week. It seems eminently sensible advice.  However, the best person can be passed over, in any culture. We saw that in last week’s UK election.  Can a 20 year-old student be a better Member of Parliament than someone with many years of experience and widely-respected? Yet that is democracy and a sign of a mature one - no bloodshed in the contest and handover - Cambodia please note.  It would rarely apply to normal employment situations, if ever!

Now here in Cambodia, the “best person” in the opinion of many people may not be the one with the best or most appropriate skills and experience. And even if they get the job, they may end up not doing it or doing something else instead.

Hence my follow-up statement “You deploy your staff where they can be most effective and perform their best!”

Strangely, despite these apparent mismatches in human resources, life goes on, business of every kind continues in the country, regardless of failure or under-performance.  One reason helps to explain, as I have blogged elsewhere, notions of loyalty and honesty differ from conventional “Western” or “Universal” values. It is a factor in fuelling and sustaining corruption.

Here in this blog I want to widen the debate beyond loyalty to go on to nepotism and cronyism.  Sometimes such behaviour seems innocent, but often it can be insidious, and highly-damaging.  My premise here is that as development workers, relying on internationally-donated funds, we should be much clearer in our stance and policies.  Very often donors and NGOs chose to remain vague, so as "not to rock the boat" despite in theory being committed with the Cambodian Government, to do things properly. (See for example this report in the Phnom Penh Post.)

The best attempt to introduce ethical standards is the CCC’s NGO Good Practice Project but sadly whereas nepotism was eventually introduced in to it after much debate, loop-holes remained and cronyism still does not feature clearly. Crucial questions are avoided  – what kind of relationships exist and are they used [inappropriately] to promote vested interests? The main loop-hole is the way in which it is easy to disguise family connections. as names can be changed or spelt differently, while extended family ties,  as close as in nuclear families, can be just as potent but escape notice.

In terms of the national scene, the largest and most controversial try to expose and criticize inappropriate relationships at the highest level of government was conducted by Global Witness.  The organisation produced what it called a “Kleptocratic” chart, showing links between families; state institutions, and powerful business interests.

Regularly, stories emerge of appointments or deals made that seem more to do with family or patronage interests, than with organizational logic.  Recently, everyone including ruling and opposition parties, accepted the principle that members of the new National Election Committee, as a state institution, must be neutral of the executive and of political parties.  Yet rewarding outgoing members with government jobs was not regarded as going against that idea.

So in Cambodia, with not much lead from above, it is little wonder that ethical messages have not penetrated down to local levels. It is hard to discern visible signs of traits of good leadership.

My reason to repeat the “best person for the job” advice was simple.  I was told about an internal promotion after the event.  No notice about the vacancy.  No job description or personal specification about the job, or about the qualifications and experience to perform the duties and responsibilities. No checking to see if, given the seniority of the post, the confidence of donors and authorities would be retained. Just as importantly, did the decisions-makers consider if this was the right move for the person at this time in their career? Or were they simply denying others the opportunity of being considered, some who would have legitimate claims to the post?

I must also repeat something I have stated for years, and sometimes not welcomed within NGOs.  If they are to preach to the government about ethics, portraying themselves as "Civil Society", then they must practice what they preach, and put their own house in order first.

Now this is the rub.  Should overt personal loyalty take precedence? “Keeping things within the family”, means interpreting “family” liberally, as traditional Cambodian or Asian values.  It is not uncommon to see such intense inner-loyalty within a group of people.  In one case it was described as “Turkeys do vote for Christmas!”.  They stayed loyal to a boss, despite confidence in him having been lost with donors, so all of them ended up out of jobs. They learned the hard way that some trust is: "Hard to win, easy to lose, even harder to win back!'

It is now 17 years ago since I introduced a simple understandable way to identify characteristics of good leadership. The drawing above is from those pre-Powerpoint days (much missed I hasten to add) when we relied on overhead projectors and slides.  The image still does its job today.  Give it to any group in a participatory training session and most will all work out what it means, women quicker than men*.  How many key attributes can you see – check your score below:

Yet despite people working out the answers, few put them in to practice.  Our tests consistently showed that arbitrary top-down decision-making was regarded as strong leadership while consultative styles were weak - that is unlikely to change for some time.

* Early experience demonstrated that in mixed group sessions, women were less likely to participate actively or speak up without special measures to encourage them by trainers, invariably male, who were by and large reluctant to do this.  That led to my suggestion for women-only seminars.  In Monitoring and Evaluation scores, based on the same pre and post training tests, women consistently out-scored men, despite being on average in less senior jobs than male participants.

Tim Frewer's 2013 paper delves in to Cambodia'd "Good Governance" too. He makes the point that NGOs included this in their project designs, no doubt led by donors, rather than an aspect of their core missions or genuine intrinsic belief.

Personal Anecdote - "the best person for the job – me?"

In another blog, I mentioned that my foray abroad and in to a career in overseas development was no planned career move. It was actually an impulse move due to frustration with a Boss. Mind you although 12 years had passed in local government in the UK. it was never my plan to do my 40 years there. I always wanted to see the world and this was my opportunity to do so, even if colleagues in Dorset were incredulous.  Frustrations:

I was travelling to a Social Services Care Home in North Dorset when the office called me there.  The Boss wanted me to drop everything and go straightaway to Dorset Institute of Higher Education (now Bournemouth University).  He was at a Governing Body meeting.  I told the young lady that they must have made a mistake.  I no longer had the “Education” brief; hadn’t for over a year, surely he wanted Geoff to go.  She checked. No, it was me that was wanted and urgently.

So I made my apologies and headed down to Tolpuddle (home of the trade union martyrs) and on to Bournemouth.  No time for lunch.

The Governing Body had resumed its meeting after lunch; so I crept in and took a seat at the back, waiting for the end of the agenda item and to catch the Boss’s eye.  After all it was not the done thing to disturb ongoing proceedings of such august folks.  I should have guessed otherwise when Director (Vice Chancellor) Charles Brewington winked at me.

Suddenly, the  poor person with the floor was interrupted by the booming voice of one of the Governors.

“Thank goodness you’re here, John – Mr Chairman let’s go back to this morning’s [adjourned] issue”. The Chairman approved. I was ushered forward. I went to sit just behind the Boss, the customary place for a junior in the hope of finding out what it was all about.  No chance. I was placed next to the Chairman. 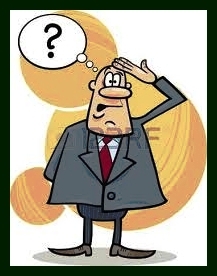 The Governor who welcomed me was also a Trade Union official, and far from the taciturn type.  He explained animatedly that there was a problem with the pay of the Caretakers and Cleaners.  They all, Governors and staff, wanted it sorted out.  These staff came under a bonus scheme that meant more pay for more effort.  I had chaired the joint consultative committee when the scheme was negotiated. And needless to say he knew what he was talking about. In contrast my poor Boss did not. These were complex issues. He had thought that mixing with the county’s elite at the Governing Body meeting would be a breeze. He had been blown away.

15 minutes later all was explained and resolved. It was a simple misunderstanding, easy to put right. The beam on Director Charles Brewington’s face was as broad as broad could be, belying his diminutive figure.

So I was thanked; duly excused and departed quietly.

Only as I approached the door, the booming voice rang out:

“John, next time come yourself – don’t send this idiot again!”

The "idiot" needless to say resented the incident. Not long afterwards he used his authority to impose decisions, even breaching fundamental principles held dear by our previous inspiring Boss. In the end I could take it no longer and resigned.  Despite the uncertainty and loss of income, I have never regretted that decision.  Fate does move in mysterious ways.

Please contact me if you would like the curriculum of the good governance training 1998-2002.
The Cambodian Government announced a similar new initiative in 2015:

https://www.cambodiadaily.com/news/school-of-good-governance-aims-to-foster-integrity-in-officials-85226/
Please go here to learn about the fate of that programme and some links to materials:

An insight in to how different perceptions of corruption and cronyism are interpreted can be seen in this Cambodia Daily report describing why the Anti-Corruption Unit will not take action against senior colleagues found to have misappropriated Global Fund money. Ironically, "MEDICAM" the  umbrella group of Health NGOs, that was guilty of comparatively smaller malfeasance, has been punished more with a significant loss of funding.  And in a case of "shooting oneself in the foot" that means donors do not have a strong watchdog to keep the Ministry of Health on-track.  More importantly, it means poor people have less help to access free or fairly-priced treatment under the Health Equity Fund.  A case of best person for the job or who can do the best job?

October 2016  As is often the case, it is not just in countries like Cambodia where positions are gained not on the basis of merit but patronage.  The UK, as we were reminded in the Northumberland Gazette, is one of the worst offenders with its anachronistic House of Lords. As published and tweeted: 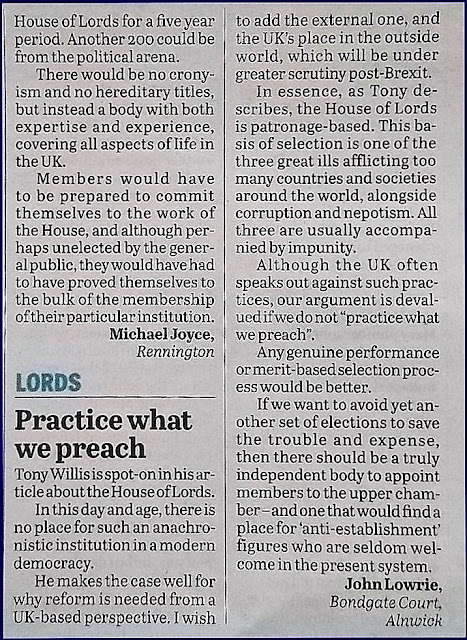