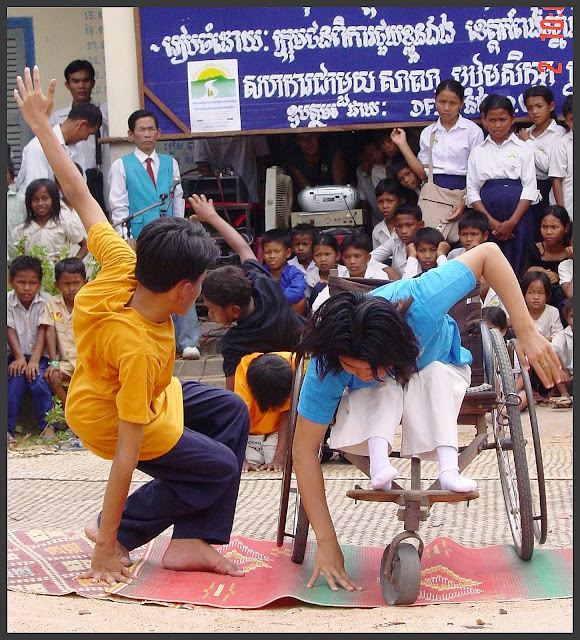 Our Cambodian Children Dancers proving that "we can do"  and that it is not their disability but their ability that matters.  They were taught to peform publicly by our great partners Epic Arts.


The biggest disappointment I have is the slow and non-existent progress in areas of development, where it is clearly needed and perfectly possible to make.  Social protection and services is but one, not just in Cambodia but in other countries where I have worked.  Sometimes it is simply misguided if well-intentioned projects that have not worked.  Most often, it is because of a real lack of will in top leadership to make things happen.  In Cambodia, a lack of compassion for poor; vulnerable and disabled people is often dismissed as “due punishment this life for sins in a past life”.

At the borders of Northumberland for many years, to emulate Shakespeare’s or Thomas Hardy’s country, we used to have “Welcome to Catherine Cookson” signs.

Her novels described the hardship of life in the shipyards (her own included) and coalfields of Tyneside at the turn of the 20th century, and detailed the social class differences but according to Dr Barron of Northumbria University “There is a real split between people who don’t really see Cookson’s work as being relevant to 21st century”.

I would argue that it is highly relevant today, certainly in countries like Cambodia still in the dark ages described by Dame Cookson.  Many of today’s poor Cambodian daughters will identify with their English sisters in her novels.  Moreover, how the UK became more enlightened - and learned not to make the same mistakes over and over again - should govern overseas aid programmes.  It seldom does.

For 13 years, I have been arguing for a proper state social work system and profession, with the UK Government and UK charities a major part of this scene, along with Australia and the United States. My messge continues to fall on deaf ears, as I post this in March 2015.

Perhaps the most salient message is the simplest one.  Cambodia's disabled people, regardless of physical, sensory or psycho-social difficulties, together with their carers, are deemed incapable of participating meaningfully in decision-making.  They are all but excluded.

“Care in the Community – Then and Now”. A guest post by John Lowrie


As part of my in-depth look at development issues in Cambodia, this piece is a guest post from John Lowrie. John heads up three development organisations in Cambodia and is the former Cambodia Country Representative for Ockenden International, and a former Senior Advisor for the Cambodian Institute of Human Rights, and has over 25 years of experience in international development. He is presently based in Cambodia.

So read some graffiti I spotted back in 1980.  I was the Chief Personnel (these days termed “Human Resources”) advisor to Dorset County Social Services.  I told the Director about it and we shared a good laugh as with all good humour, there was more than a hint of truth in it.  Our Director was in fact one of the UK’s leaders in social work and related fields of mental and physical health.  He was one of the first proponents of “Care in the Community”. The idea was to switch children, disabled people, and the elderly from institutional care to return to live at home and with families.  If necessary support would be provided; arrangements for adoption/fostering explored, and where residential care was best, then it should try to resemble normal home-living as much as possible.

A Cambodian foster mother (front, left) who took in a large number of children from the community. In Cambodia, 79% of orphaned and vulnerable children are cared for by older people. For more info, see: http://www.helpage.org/tags/cambodia/

The graffiti-writer conveyed one essential truth.  Social workers help to solve problems.  This they did then and still do today with success and appreciation, despite inevitable failures, because of dedication and good training.  One simple principle guides them: “the best interests of the client” comes first.  The same is usually true of associated professionals – doctors, nurses, and lawyers that specialize in social work and care.

I had cause to re-visit my early years some 21 years later, by which time I had ventured in to aid and development and served in four countries before taking up a human rights brief in Cambodia in 1998.  That job and my NGO came to an abrupt end in 2002 following an eight page Christmas letter sent by our Finance Officer to donors detailing systematic financial irregularities.  I was lucky in that then, as now, there is always work for people like me with fund-raising skills.  One such consultancy led me to take on a voluntary assignment to review Cambodia’s Disability Action Council (DAC), modeled on the UK body of the same name.  I was back to my origins.

Cambodia by 2002 was well in to its post-conflict transition.  It was in the process of nation-building or re-building.  Considerable efforts and a lot of international aid money were going in to every area of public service…except for one.  I made recommendations, and also set them out in an article that was widely-circulated.  Here is an extract:
“Post-conflict developing countries usually attract considerable support to rebuild poor infrastructure and human resource capacities.  Very large sums are spent on roads and buildings that are visible physical evidence of progress being made from philanthropic awards.  Less visible, but still discernible over time, are the efforts to improve services – administrators, lawyers, teachers, health-workers and others all feature prominently in education and training programmes.  Many are supported to go overseas for best education and training.  In Cambodia this process has been going on since 1993 when it was admitted back in to the international community.  There is though one profession that hardly features – social workers.  Why?
Given the scale of disaster in Cambodia - the world acknowledges the tragedy of the Khmer Rouge with millions killed through execution, starvation, or hard labour and almost every surviving family traumatised – if ever there is a country that needs the best most highly-skilled social or community workers, surely it is this one?  Some 9.8% of the population suffers from one form or more of physical, sensory or psycho-social disability[1].  And the absence of social workers shows, because the weak and vulnerable continue to miss out and be left behind.  There is no institutionalised profession dedicated purely to working with them on a generic or holistic basis to overcome adversity.  Why does social work professional capacity-building seldom appear in international aid programs?

Unlike the medical, nursing, teaching, and legal professions, there is no national plan.  There is no career entry scheme within services or academic institutions.  The Ministry of Social Affairs does have officials down to district level but their main role is to compile statistics.  It does not have social workers.  In fact they just do not exist although other occupations do perform social work as a sideline.  Mainly it is a responsibility of the Commune Councils and Village Chiefs.  However, their order of priorities is first loyalty to the ruling party, which has 98% of Commune Chiefs, followed by Law and Order.  Social work in reality is part of “Order”.  Given the emphasis on the military and police even today – they receive a much higher share of the national budget than education, health or social services – it means that suppression rather than settlement of problems usually occurs”.

What was said in 2002 is still true in 2014, apart from two worthy efforts by the Royal University of Phnom Penh and National Institute of Social Affairs that are only now producing the first graduates.  They are of course mainly at the start of their careers. [2] Those 12 intervening years have seen Cambodia’s social services blighted by scandals.  The US and other countries placed a ban on international adoptions [3].  Widespread malfeasance was found in the administration of pensions to veterans[4].  Illegal and cruel treatment persists at Social Affairs Detention Centres, especially after vulnerable homeless people or street-workers are rounded up to “beautify” Phnom Penh for international events[5].  Currently topical is the inappropriate vast growth of orphanages and “voluntourism” for private gain and exploitation of children, with the Ministry’s passivity.[6]

Equally true of this period is that the sector has enjoyed unbroken consistent high funding from Australia, the UK, USA and a host of other countries and well-meaning foundations.  Yet none of them have made serious efforts to establish a statutory social work system and profession.  I do not understand how we could have in such donor countries world-leading social work service providers and academic institutions that could and should be commissioned to install proper systems and ethical standards in Cambodia.  I do not understand how international NGOs with their expatriate leaders are allowed to persist with, and are well-rewarded for providing what are inevitably instead sub-standard and non-sustainable solutions.

Until we do “Care in the Community”, the “Best Interests of the Child” will not penetrate the psyche of public service in Cambodia.

Note: For a case study that illustrates the many ways in which proper social work support and continuity of care for the family would be helpfully, click here“

The Cambodia Government has introduced new guidance for social work practices - a commendable initiative. Hopefully the commitemnet will be backed up with more resources, a greater sgare of the national budget,

Good write-up here of a dedicated social worker from UNICEF and my Tweet about it.

This week the UK Government announced major new funding to the Global Fund for HIV/AIDs; Malaria and TB.  My point is that you need more than such top-down methods if goals are to be achieved. Look at these two tweets:

One shows you what happens where "joined-up thinking" does not apply in local plans, and of course ordinary people are not supposed to question superiors.  So you have a new road built without drains, so that vast areas of stagnant water are created, some with raw sewage.  There malaria and dengue-carrying mosquitoes breed freely.  The other picture shows the standard medicine issued by local pharmacies, even to children who are ill.  You can clearly see the small dose of antibiotics.  This is why there is growing antibiotic resistance traced to Cambodia.

Now addressing such issue is not a question of money, it is about political will and community empowerment
[1] A figure based on research for ADB and World Vision.  More recent research on psycho-social health including trauma passed on to younger generations in Cambodia can be seen on: http://www.tpocambodia.org
[2] Partnerships with the Universities of Washington and Ewha respectively – please see: http://www.nytimes.com/2013/06/19/world/asia/19iht-educside17.html?pagewanted=1&_r=3&smid=fb-share&amp;
[3] http://www.komonews.com/news/archive/4127656.html
[4] http://www.khmerwriter.com/101/tic/daily_acu_probe_graft.asp
[5] licadho-cambodia.org/pressrelease.php?perm=193
[6] http://www.friends-international.org/blog/?p=2156