Cutting the head to fit the hat 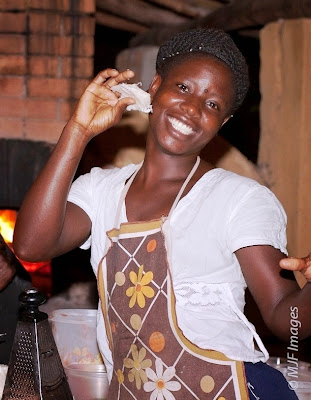 This picture from the internet is of a lady from Nkhata Bay, Malawi, just as ebullient as the ones we talk about below.*

My story here connects my favourite meal, fish at its very best to be found in Northumberland; Saint Helena and Malawi.  Craster Kippers are world-famous as is Lake Malawi’s endangered “Chambo” although I think Usipa, cooked and eaten whole can be better than whitebait.  Saint Helena has an abundance of great fish, for now, with the best fish-cakes in the world.
I explain the title of the blog at the end taken from Cambodia's PM Hun Sen.

In a previous blog I posed the question would Mark Constantine of Saint Helena remember when as a 12 year-old he told us of his heartfelt worry?  It brought us great amusement, especially on the part of the Head-teacher Stedson George.

The good laugh arose from a deathly serious subject that a few years later, in Malawi, also gave rise to similar all-round mirth, despite the horrors of the disease we all saw.

Here I complete that Saint Helena anecdote, then go on to one in the same vein in Malawi, with a small twist about Cambodia. It begins back in the 1980s, the early days after the discovery of HIV/AIDs and the very real fears that it would engulf the whole world.

Country School on Saint Helena was one of the secondary schools that eventually merged in to today’s Prince Andrew School.  Education Officer Basil George had asked me if I could help them out as they were short-handed, and try to teach.  I think I was more the learner. Training adults is a doddle compared to real children, something that cropped up years later with government ministers, like the UK Overseas Aid Minister and Cambodia’s Minister of Education.  Some days at Country School, rather than have full school morning assemblies, each class would have its own assembly instead.  So for my class, after the prayers and announcements, if time permitted I allowed the pupils to ask any questions.  I was for them an object of some curiosity, accorded with an unmentionable nickname.  (Mine did not stick, whereas for many Saints, the nick-name is the only known they are known by.)  To set the scene, please bear in mind in those days, telephone communication between the outside world and Saint Helena was very limited.  Most news arrived via the BBC World Service’s shortwave service.  It was from those reports that the Island heard about HIV/AIDs.

I do not remember who in the class posed the question but Mark Constantine’s finale stuck, or should I say struck a chord, to this day? The question was simple. “What is HIV/AIDs?”  So I tried to explain what it was; why it was potentially life-threatening, and what people could do to avoid being infected.  The whole teenage class was enraptured.  At that age, their hormones-levels were rising.  You would not have expected Mark to take a lead but did he speak for all?

And when relayed later, it brought out Stedson’s heartiest laugh. (Stedson's nickname is "Polar Bear", perhaps based on him wrapping up well whenever the temperature plunges below his self-declared freezing point of 60º fahrenheit, 15° celsius.)

Fortunately Saint Helena has avoided any serious problems with HIV/AIDS.  The same sadly has not applied to Malawi, to Cambodia and many developing countries.  Thankfully in recent years with the development of generic anti-retroviral (ARV) drugs, the worst is over.

I was a “VSO” volunteer in Malawi in Nkhata Bay in the early 1990s, as told in my blog “A lot of things”.  We invited a United States Peace Corps volunteer, Deepa, to stay with us.  Peace Corps and Action Aid colleagues were doing the first HIV/AIDs health education awareness and prevention activities.  Deepa was of Indian origin, a Jane by religion, and a little naïve. “Please, you have to help me”, she implored me.  “Why me?”  “Well, you’re a man and you’ve been around a bit!”


Deepa set me two challenges.  The first was to help her to produce props for her health lessons.  The second was to recruit suitable “peer educators”, who she would teach and they in turn would replicate the training with at-risk people while doling out free gifts.

My project employed carpenters to build boats for fishermen.  They were multi-skilled, presenting me with an intricately-carved chess set.  So I told Francis and Sam, No’s 1 and 2, about the problem and challenge.  “We want wooden penises, please!”  (Thereinafter called “wooden willies”.) Everyone knew of people dying from AIDs, they were keen to help, and of course greatly amused by the task.  “We need a model to work on” offered Sam, before quickly recanting, eyes glancing down towards his manhood.

The next morning, lined up on my desk were 6 wooden willies, complete with all essential parts, some circumcised, others not.  Deepa was most impressed, as she tried to disguise her blushes. But it was not yet mission accomplished.  She took out her other training aids; her condoms, and tried to slide one on the first wooden willy. “They’re too large, she exclaimed!” Francis said “Madam, you don’t know us African boys!”  Sam, rising to the occasion, took one of Deepa’s condoms.

Fearing the worst, she turned away, avoiding any professional obligation to collect direct empirical evidence.  Opting for modesty instead, Sam made his way to the toilet.  That toilet always gave me a laugh.  Its door had a notice saying “Please flash after using!”  Sam was right. The mass-procured condoms, Gift of the American People, were indeed too small.

Deepa telephoned her Supervisor in Lilongwe. He gave what to me was a typical donor reply to an unworkable local solution.  “Make the wooden willies smaller.”  Years later I recalled that instruction when Cambodian Prime Minister remarked “You can’t cut the head to fit the hat!”  I wonder if that is why this wily politician gets the better of donors?

The second challenge was easier.  All I had to do was to go to the bars for a few beers, something apparently that I have a talent for.  Once there, I had to identify the “bar girls” or sex workers, and recruit any who were willing to join the training.  As Deepa was offering financial incentives, there were plenty of takers. In fact the project was an outstanding success despite the small wooden willies and condoms.  Sadly it was too late for many good friends we all knew, including my Secretary, a mother of four children, who succumbed to AIDS.

My next catch-up blog from the past will be about the “Saint Helena Milkman” and teaching real children in Cambodia. 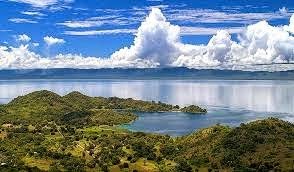 My project in Malawi, UK-ODA (now DfID) funded, was called the Likoma-Chizumulu Fisheries Project, the names of the two islands close to the Mozamabique shores.  This view borrowed from the internet is very like the one from Nkhata Bay, described in another blog.

* Please note that I would not want to infer that this lady is a bar girl, but her pose is so like the "happy-go-lucky" Bar Girls I recruited for Deepa.

"Cutting the Head to fit the Hat"

The first time I heard this phrase was when it was uttered by Cambodia Prime Minister Hun Sen who frequently uses Khmer riddles to illustrate his points.  Now it is meant to demonstrate an absurd futility but in fact the absurd is not entirely rare in politics in Cambodia. In another blog I describe how "Turkeys do vote for Christmas". For example in an astonishing story at village next to Kampong Chhnang's abandoned airport, I heard confessions of blatant lying to authorities.  "Why did you lie?" kept asking the District Governor. "It's costing our community and your groups a lot of money and help?".  They would only say they had to and "a lie is not a lie" in Cambodia (when done for someone's greater good!) In the end it cost them dearly as they would not withdraw it and eventually their project folded. Their hats were intact but not their heads. (The lie was over who headed their NGO and how he came to be elected and appointed.)
Posted by ANorthumbrianAbroad