Heather George was as adept with her children as she was with her old piano at producing tuneful renditions for morning assemblies at Country School, Saint Helena. I always remember one song and it came to mind thanks to Santil Phin in Cambodia. Count your blessings, one by one. Please tune in to it.

He says that we (most of us), do rather dwell on the bad news about Cambodia. He would like to see more balance with more of the good news.  While there is no doubt that there is considerable scope for improvement, especially for the poor and vulnerable, any rational fair-minded person could not disagree totally with Prime Minister Hun Sen’s oft lament that not enough credit is given to tangible progress.

Religion is often the cause of conflict although it shouldn’t be if people stuck to original teachings.  My part of the world, Northumberland, is famed for being where Christianity was restored to a heathen island.  I think my affinity with the world’s indigenous people’s stems from our Celtic origins, as picked up and noted by our “Northumbria Community” in their daily prayer.  Personally I never see much contradiction between the various religions in terms of how we should all treat each other.

So this Christian song has universal appeal as well as particular resonance in Cambodia.  It accords with the late Kem Lay’s advice: ‘Wipe away the tears, continue your journey!”

Santil Phin in his works lists a lot of the blessings of Cambodia.

One I wish to add here is a simple truth.  Away from the politics and expensive fuss of the Khmer Rouge trial, I have often encountered ordinary Cambodians in post-conflict Cambodia just getting on with their lives and their neighbours.  I wrote about them in my booklet for Ockenden and Cambodians.  You can read for example about Kon Kleng a largely former Khmer Rouge community rebuilding and reconciling.

The best example though is either Kosal (see below) or our good friend Suon Rotana, our community facilitator 2003-7 in Tuok Phos, Kampong Chhnang. Rotana enjoyed a beer or two as did the self-help group leaders he worked with.  More than one chicken-rearing enterprise came to a premature end due to the alcohol-infused need to feed their drinking. In several of those groups Rotana and his new friends would exchange reminisces about battles fought. He was a government soldier. Many of them were his foes and at the same place at the same time. One of them might have laid the landmine that took his leg.  No grievances; ideologies or old loyalties stood in the way of their new-found co-operation. Such a process has been going on quietly for years all around Cambodia.

It is certainly a blessing, showing Cambodians at their best. Appreciate this film about Rotana,

Reflections on blessed childhoods in Northumberland and Saint Helena feature in this earlier blog.

Often I blog about the frustrations of overseas development work (apologies due?) – mostly by the way caused by those with lots of money (Lords and Ladies of Poverty) not those with little or none - a point I recently tried to make to the UK's Daily Mail as added to my most popular blog.

Kampong Chhnang is an interesting province but one that often visitors just pass through. It is unmistakable, called after the craft of making clay pots with many to be seen along the roadsides on sale. In fact you see the artisans all around Cambodia selling their wares on oxen-drawn or motorized trailers. (More on Kampong Chhnang in this blog including reference to its Khmer Rouge era airport.)

Kosal is definitely a real success story an inspiration and a most unlikely one. He led the children’s advocacy team in Kampong Chhnang featured in the picture above wearing the plastic mackintosh. He illustrates perfectly the point. Despite never having a paid job, he's done better in the end than all of our salaried NGO workers. By the way, he’s looking for sponsorship for a teacher, if anyone can oblige? Check out his Facebook page.

However, if you follow that link to read about Kosal's heroics, you can see how sometimes, occasionally, when you succeed beyond expectations it  does make things seem worthwhile (at least for a while!). 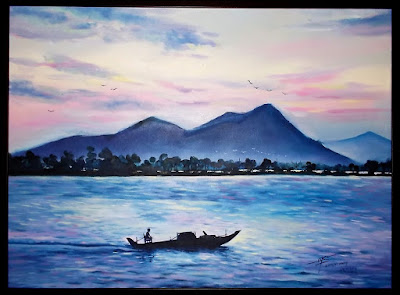 Mount Kongrei - according to ancient legend it is the body of a woman who committed suicide after her husband abandoned her. One version goes the "a giant woman has captured the mother of a prince, so he married her to set his mother free, then left her. In grief, she lay down and died and turned in to a mountain." The top picture is of a hand-painting done to take to UK by an art student in Phnom Penh from one of my photographs

Saint Helena, Malawi, Rwanda and Cambodia have also produced some characters for me, thank you. Maybe one in Rwanda still tops the list?

The words of Count your Blessings:
Posted by ANorthumbrianAbroad