A blessed and charmed childhood

The same jocular theme appears in a later blog:

Dunstanborough Castle was to the north of our childhood coastal playground in the 1950/60s.  Our local beach was Longhoughton but we wandered freely up and down the coast, from Alnmouth or Amble, all the way past Boulmer, around Howick; up to Craster and beyond. Bamburgh, occasionally Holy Island, was as far as our little legs on our bikes would take us. (Well worth logging in to videos links right.)  During school holidays we would camp out, away from home for days on end. We were relatively care-free and safe.

For today’s children, life is more restricted.  Holidays, as I blogged last year, are when a child is most at-risk.  In Cambodia that risk is increasingly from holiday-makers. This is why I co-ordinate for colleagues in campaigning for more responsible tourism. (If you are interested in spreading the word, please follow us on social media; visit my website or e-mail me.

Now I do want to make a very important distinction.
Human rights, including of course child rights are universal and inviolable.  They have been since the Universal Declaration.  And these rights apply throughout the world, not just in developed ones.  However, how those rights are applied is a matter for individual countries and communities, each of which is best-placed to determine how they are integrated in to their circumstances and culture. “The West” is not as expert as some “white saviours” maintain.  Indeed there have been too many revelations recently of child abuse and systemic failures for that claim, or its accompanying stance in international aid, to stand up.

There is also one important point I wish to make:

If you are not qualified or permitted to take on a child-care role in your own country; or to do so would be considered inappropriate by most decent citizens who warn children “not to talk to strangers, etc.", then you should not behave differently in Cambodia or any other country where your wealth takes you!  You should not take advantage of lax oversight or the simple innocence of friendly people.

My years on Saint Helena Island reminded me of my childhood.  My mercurial friend Edward McDaniel used to remark "Saint Helena meant only for children; old folks and donkeys!".  He was right. It has been a good place for children to grow up and to be educated in at least until their later teenage years. They enjoyed the kind of freedom in the 80s and 90s  that we had in Northumberland in the 50s and 60s. Then the outside world burst in and poor little Saint Helena was splashed all over the UK tabloids with allegations of child abuse. Millions of UK£ later the allegations were found to be greatly exaggerated.  The external experts had a field day and greatly enriched themselves as well as a few tarnished reputations. (I offered my bit in several blogs; here and here.)

I will always wonder what might have happened if my advice and offer had been taken up, if this saga would not have happened?  My view then and now remains the same.  if you want to do what is best by children, then you need to ask them. And that applies to ones with disability too! Please make sure you enjoy their confidence to obtain their genuine views.  Children seldom miss much.  They know when something is up with their friends and peers. They just need a way to express it to alert well-meaning adults to act.  Strangers, even the best-trained ones, are seldom as adept as familiar folks.  And that is Saint Helena in abundance - familiarity and friendliness.  The island can't be left just for old folks and donkeys.


These days I always aim to be in the UK for Autumn for its glorious golden colours. Although trees in Northumberland are not as plentiful as in our childhood, there are still many to admire. My Cambodian wife, however, has her sights on other things - "Free Food!" The hedge-rows are still stacked with raspberries, blackberries (or brambles as we call them) and "Rose-Hips". We actually made money collecting rose-hips in a scheme that lingered on from the war to provide vital vitamins. For many years we earned 4 [old] pence a pound. I still remember the badly punctured hands and fingers from the thorns.
I can't say that we loved the syrup it but rice or tapioca was often served to us as dessert especially for school-dinners, cooked in milk with Rose-Hip syrup to make it palatable.  I tell the wife that Cambodia did not invent "Bor Bor".

We also had a similar sweet red juice added to our ice-cream "Sasparilla". Children today don't know what they miss, or escape from! 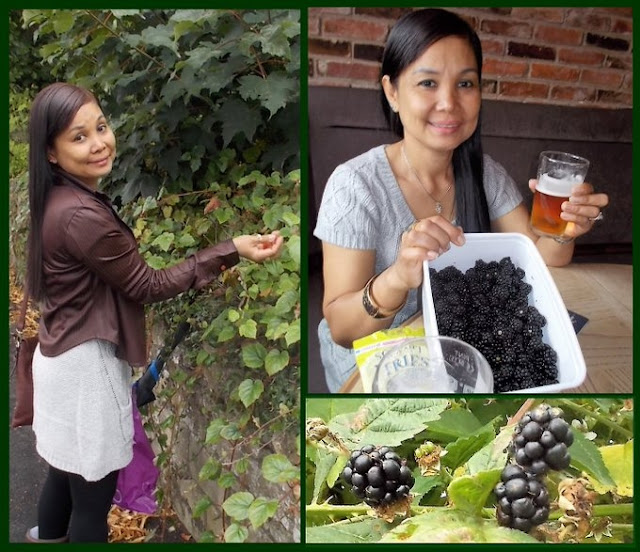 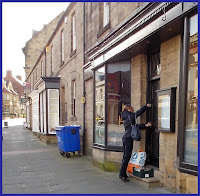 Usually it is a smell that instantly transports you back years. However, just today I couldn't help noticing the early morning delivery of vegetables left on the door-step of the Caffe Tirreno. By the time I got the camera out the lady arrived.  I must admit I hadn't seen that for so long. In most places I have stayed for many years, anything left out like that would soon disappear.  The notable exception is Saint Helena Island where many such old world charms live on.....for now.