Last week my attention returned to Saint Helena, hence the blog.  However that led to me dropping in to the local papers to discover that the long-awaited, eagerly-sought Wass enquiry in to alleged child abuse had been conveniently released just before Christmas.  Funny how bad news appears when everyone’s attention may be elsewhere? 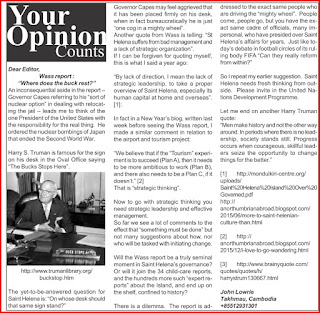 Well to everyone's relief, at least those who have Saint Helena’s best interests at heart, the enquiry cleared it of the worst things the UK tabloid press and some “Non-well-wishers” had accused it of.  The report did go in to considerable detail about the island’s governance – the subject that concerns me – hence this follow-up blog.  Both local newspapers had given a lot of coverage of the findings, but they and the Island, in my view could do with suggestions on “Where to go from here”.

An inconsequential aside in the report – Governor Capes referring to his “sort of nuclear option” in dealing with relocating the jail – leads me to think of the one President of the United States with the responsibility for the real thing.  He ordered the nuclear bombings of Japan that ended the Second World War.

Harry S. Truman is famous for the sign on his desk in the Oval Office saying “The Buck Stops Here”.

The yet-to-be-answered question for Saint Helena is: “On whose desk should that same sign stand?”

Governor Capes may feel aggrieved that it has been placed firmly on his desk, when in fact bureaucratically he is just “one cog in a mighty wheel”.

Another quote from Wass is telling: “St Helena suffers from bad management and a lack of strategic organization”.

If I can be forgiven for quoting myself, this is what I said a year ago:

“By lack of direction, I mean the lack of strategic leadership, to take a proper overview of Saint Helena, especially its human capital at home and overseas”.

In fact in a New Year’s blog, written last week before seeing the Wass report, I made a similar comment in relation to the airport and tourism project:

“We believe that if the “Tourism” experiment is to succeed (Plan A), then it needs to be more ambitious to work (Plan B), and there also needs to be a Plan C, if it doesn’t.”

That is “strategic thinking”.

Now to go with strategic thinking you need strategic leadership and effective management.

So far we see a lot of comments to the effect that “something must be done” but not many suggestions about how, nor who will be tasked with initiating change.

Will the Wass report be a truly seminal moment in Saint Helena’s governance?  Or will it join the 34 child-care reports, and the hundreds more such “expert reports” about the Island, and end up on the shelf, confined to history?

There is a dilemma.  The report is addressed to the exact same people who are driving the “mighty wheel”.  People come, people go, but you have the exact same cadre of officials, many impersonal, who have presided over Saint Helena’s affairs for years.  Just like today’s debate in football circles of its ruling body FIFA “Can they really reform from within?”

So I repeat my earlier suggestion.  Saint Helena needs fresh thinking from outside.  Please invite in the United Nations Development Programme.

Let me end on another Harry Truman quote:

“Men make history and not the other way around. In periods where there is no leadership, society stands still. Progress occurs when courageous, skillful leaders seize the opportunity to change things for the better.”
Update March 2021
St Helena seems to be well on its way spiralling down not on its way up despite what we all hoped were vital lessons learned in its governance. In fact on a referendum on proposed change a record low poll took place.  I devoted a blog to the subject with comparisons to UK public service. "Saint Helena Governance and Administration – 2020 – studies, options and plans."

The UK Government has announced the appointment of a new Governor, a person whose career has been within DfID, apart from one small break..https://www.gov.uk/government/news/change-of-governor-of-st-helena-ascension-island-and-tristan-da-cunha  I can see the logic in terms of "overseas development" experience but sound a note of caution.  Consummate insiders are seldom open to outside thinking and ideas.  Solutions to Saint Helena's development problems have eluded DfID for years - what new will she bring?  I trust that Saint Helenians were involved in the selection, in accordance with best human resources practice.

9 January 2016:  I welcome the appointment of Ginny Ferson to oversee implementing the Wass findings as carried in this week's Independent.  However I still maintain that an independent reputable external examination of all aspects of governance, such as by UNDP, is better than a trusted insider, however good she is!

I also wish to comment on the “racist” term and allegations, especially the caveat on Page 152 of the Wass report of “evidence from some expatriate professionals that their children had disclosed instances of racial bullying”. Those allegations need to be examined with the same rigour as Wass has applied elsewhere.  You need to determine if there is genuine malice; exactly what was said; how was it conveyed, and how prevalent it is. Is it more serious than the usual banter that takes place in schools?  Always children will remark upon differences, from a peer being left-handed; to colour of hair, wearing of spectacles, etc.  I have not been on the island for many years, but I was always struck by how Saints and Saint children especially were welcoming of their guests.  Please take care not to harm this relationship.

Saint Helena has two newspapers, one that as its name suggests is independent, and the other that operates courtesy of public service with a fair range of editorial freedom.  Therefore it is good that these formidable issues can be aired from different perspectives.

As well as the "Letter to the Editor" in order to clarify issues, to add to the debate and assist Saint Helenians to know more about the topics, I also add the following extracts of correspondence:

I thought that I ought to share my thoughts and a letter with the Sentinel, as well as with the Independent, for fairness and balance.

You will see that I am slightly more sympathetic to the Governor than Wass.  In fact there are two inconsistencies in thinking that could do with being addressed, but probably won't be.

Firstly, they expect the Governor to act as a chief executive and to be hands-on or a "shirt-sleeved" manager.  The problem with that is of course it does make it much harder when you are embroiled in the detail to be a strategic manager - that they also demand!

The second more substantial one that development practitioners like me would point out is that Wass is saying that for social care, the appropriate standard of public service provision and professionalism to apply on the island - is that of the UK, i.e. of a rich developed country.  There is an implied suggestion that the same must apply to the health service.  Certainly 5 and 4 star visitors will expect adequate care in emergencies until a "medivac" plane can arrive.  And obviously the airport must operate to international standards of safety.

Now those international standards all come at a cost.  It is already clear that DfID us not prepared to bankroll the island. Its record is always one of giving less than what is needed.  So the task is to make the best use of the money.  With so much money now sunk in to social care, for a comparatively small number of clients, Councillors and development workers are entitled to ask "Could that money be put to better use elsewhere?".

As someone who deals with the kind of child abuse issues (and I can tell you a lot far worse besides) that the Lucy Faithfull Foundation feared and still fears exist on the island, I told them directly that there are alternatives to the UK approach, which by the way has had its own share of spectacular failings, as has Australia now coming out if its public Royal Commission hearings.

My suggestion is to try community-based self-help groups as we have set up here in Cambodia.  They run their own child protection networks due the abject failure and even connivance of official agencies in abuse.  Internal problems are usually best solved internally, admittedly with outside help but not if imposed from outside as Claire Gannon demonstrated.  But then your readers will know that she is not the first expatriate to adopt such a high-handed attitude towards Saints, and unless there is a real change in leadership, she won't be the last!

Re: Firstly, they expect the Governor to act as a chief executive and to
be hands-on or a "shirt-sleeved" manager.  The problem with that is of
course it does make it much harder when you are embroiled in the
detail to be a strategic manager - that they also demand!

Editor: "There are many examples of successful senior managers who are good at big picture strategic thinking and translating that into nuts and bolts schemes of work to produce measurable results".

My reply: Actually I fully agree with you - I think though that Wass should
address that issue, rather than suggesting it without elaboration, as
indeed you are correct the public sector is not brilliant at producing
managers who can get the balance right.  It is something that good
training can provide but as I am sure you know it is only last year
that the FCO opened the first school for training diplomats.

Re: The second more substantial one that development practitioners like me
would point out is that Wass is saying that for social care, the
appropriate standard of public service provision and professionalism
to apply on the island - is that of the UK, i.e. of a rich developed
country.

I have not seen what FCO, DfID, and SHG's strategic aim for the Island is, although I expect it is stated somewhere.  I just doubt that it has been arrived at in consultation with Saints at home, and from my viewpoint those abroad, who are very important to achieving such a goal.

From an overseas development viewpoint the aim should be something like "to achieve by (say) 2021, middle-income (mid-quartile] developed country status of US$7,000 per capita per year from internally-generated sources".  So that is almost £5,000 per head or an annual revenue of £24m.

Now you will immediately think back to the comment about the standards of public service (and other human development indicators), and if UK developed country/high income ones apply, then we would still fall short. (You may want to look at the new UN sustainable development goals that have replaced the MDGs - https://sustainabledevelopment.un.org/?menu=1300)

Anyway, the aim and the strategy should be clear. Is it?

Re: My suggestion to ask UNDP to examine the Island's governance and development plan:

".... so what I am saying is St Helena cannot, should not depend on the UK. UNDP has good people and can access very good people - getting the right ones for St Helena would be the challenge.

And then of course the UK would have to agree to "letting them in our patch".