Alnwickdote No 16: No good crying over spilled milk (Part 2).

Now we all know how frustrating much of our work can be, and those who take on post-disaster emergency relief work, need to have the strongest constitutions, to cope with what they see.

And then something happens or comes along that is inspiring to change our mood, making our humble efforts seem much more worthwhile again.

One such thing happened to me.  It was astonishing considering the circumstances.  It was all due to that poster stolen from me years later in Cambodia, as explained in Part 1.  Here I explain why it meant so much. The story, as written at the time, went:

"We were still in the midst of the crisis.  Tens of thousands of Rwandese refugees had been forced to return home from Tanzania.  They had to trudge by foot.  Their journey had been doubled in some cases because they had tried to flee deeper in to Tanzania before the army turned them back, at times violently.  The international community was not ready for this crisis.

In fact all UNHCR trucks were well and truly parked, locked in the compound.  One of the few agencies to be on the ground, and with permission to operate was HelpAge International.  Our plan was simple, to use our own vehicles and hire as many as we could, to pick up elderly and infirm people along the road who were unable to complete their journey.  Then we took them to rest way-stations or even home.  It was sometimes too late for some.

One toddler died on Christmas Day in my Land Rover on the way to hospital.

I had returned to Kigali to replenish supplies of nutritional dried biscuits from UNHCR, that we handed out, along the way.  It was late in the evening, after a long day and long journey, and I will admit I was tired.  Then I saw an old man struggling up the hill.  I could not pass him while driving a HelpAge vehicle.  My much-needed medicinal cold beer would have to be delayed.  But then I thought, there’s a good place on the way.  The old man would no doubt welcome a drink too.

So we stopped at this little shop just a short walk from the office. The family asked my “Why do you bring an old man with you (one disheveled to their eyes).  Rather than struggle to explain, I took one of our posters from the Land Rover.  They had barely started to read it when one girl gave out a deafening scream.

“It’s my sister, my sister!!!”  The shop owner was as shocked as the old man and myself, not by the scream or the news but that this was the first sound the girl had uttered ever in their presence.  The girl was one of many separated from her family during the genocide and traumatized by the experience.

Our poster was one of an old lady 200 kilometres away who had taken in orphans – just like the shop-owner. Could the girl be mistaken with the identity of her long lost relative?  In fact she wasn’t.  It was indeed her cousin and we were able to reunite them.

Thanks to that unknown struggle of one old man and a fair bit of luck."

My thanks to HelpAge International for retracing a copy of the my photo for that poster, and though an actual poster could not be found, these pictures and articles will suffice instead.  They help to make up for the loss and to illustrate this blog.

More anecdotes of my time with HelpAge can be found in other blogs:

The first is when my colleague Gillian and I were in an armed hold-up in Nairobi, Kenya, etc. Those of you with workaholic tendencies take note! The other tells of just how desperate and unethical some NGOs can be to raise money!

If you would like to read those articles I penned so long ago, you can find them via these links:

For me what is fascinating is that this very early argument - that far more aid and effort should go to local NGOs - is as relevant as ever.  In fact too much aid still goes to the "usual culprits" the big expensive agencies and INGOs with their professional fundraisers!

The first tells about older people in Rwanda and how they formed "self-help groups" that has been my model of choice for community development ever since.

Now those early groups, with one common  and totally unexpected finding, showed even then that often collective wisdom within communities, can beat external experts and conventional wisdom.  They told us what their No 1 problem and priority was.  Remember we were still in the immediate post-genocide period. There were shortages of housing, food, health services, etc.  Yet what did the older people say was their main problem?  Loneliness! Yes, loneliness. Hey presto just by forming self-help groups, with weekly club-like meetings, the main problem was solved.  And hardly any big money was needed in the process.

The second article, in Part 1 and part 2, led to the idea of federated self-helps joining and forming their own local NGOs. 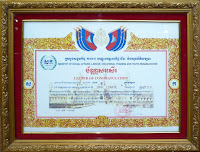 Was the certificate pictured in Part 1 of this blog a clue as to why people would take my personal possessions and refuse to return them?  Probably the one they wanted most was this certificate awarded to me by the Ministry of Social Affairs acknowledging my original development practice in forming community self-help groups of vulnerable people in Cambodia, now copied by other NGOs and part of official government policy.  It suited some to pretend that this achievement had not taken place! Well, they may have destroyed the evidence but at least a copy remains.

Fascinating: an encounter with another former colleague John le Fevre thanks to social media. His and my paths must have crossed in Rwanda.  His experiences mirror mine.  You can access his story here.

Great story by Phil Coomes of the BBC on the power of old photographs to reunite families in Rwanda.