Alnwickdote No 10: Fit and Proper in the Aid Business

This is the follow-up to my last blog in which I questioned why donors do not practice what they preach when it comes to corruption and misuse of funds.  In this blog I extend the argument to those with regulatory responsibilities.  In my last blog, I referred to an article where it was argued that “rotten apples” should be removed. That is not an easy task!

If you delve in to history, it does not take long to discover parallels from the past with a bearing on life today, some good and some bad.  For instance we have “Rotten Row” in Alnwick, Northumberland.
Apparently this is where Scottish King, William the Lion, was captured in 1174.  The town also had its ancient Alms Houses that were one of the earliest forms of charitable-giving.

A colleague upset a lot of people in charities or “Non-Governmental Organisations” a few years ago.  He wrote “Many dwell in a fool’s paradise that because aid organizations help the less fortunate, they are ethically OK”.  His homily like those of what is still a small brave minority was of course unwelcome and disparaged. 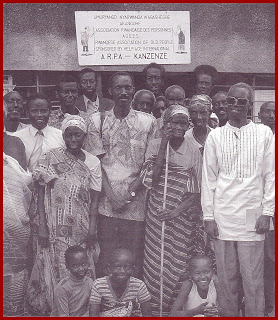 “Rotten Row” could describe what I observed in Gyseni, Rwanda in 1996.  No I'm not talking about the methane gas that emanates from Lake Kivu there but what I saw was just as obnoxious. I was there with HelpAge International and our local partner, ready for the impending return of tens of thousands of refugees from Zaire.  The border with adjacent Goma City in Zaire was to open up in the next day or two, with refugees massing along the road on their way home.


My local Partner NGO in Rwanda whose Gyseni Branch hosted our emergency relief efforts.  See this blog and my article in HelpAge magazine here: Article 1 and Article 2 Part 1, Part 2.

I witnessed the most unseemly scene as fleets of well-known and not-so-well known NGOs, who arrived suddenly from nowhere, jostled and bribed, so that they could be at the front of the row at the border gate.  There the world’s media, they hoped, would capture their logo, and so the attendant publicity would be great for fund-raising!  The only thing was few of them had actual operational programmes to give immediate help.  (Concern and fellow Irish group GOAL, like HelpAge, were some of the very few NGOs that did!)  When I returned to Kigali, I saw where most of the bosses in these NGOs and the media were camped  - they had filled up the Mille Collines (of "Hotel Rwanda" fame) and every other best hotel.  Some were “suit-case” NGOs – once they had their images, they simply returned to where those images would prove useful for them.
The scenes I witnessed, the people I saw in Kigali, in total contrast from the ordinary Rwandese on the road home, was the most vivid illustration of what Graham Hancock describes in his seminal book "Lords of Poverty."  I have never been able to get rid of the disgust and revulsion.

Many years later in Cambodia, another country racked by human tragedy on a monumental scale, I received this stark warning from the head of a major charitable foundation:“About XX being a fit and proper person - I would say an unequivocal NO!”

Unfortunately his warning was too late.  A colleague and I had already committed to working with the gentleman, and between us had raised US$920,000, of which $214,000 was to go directly to beneficiaries.  You will note that this is 23%, which will seem small to many, but is actually larger than the value of direct benefits in many development projects.  Neither of us knew about the history leading to the warning.  Now despite this the project did work well for many years, but without the two of us, it was unable to raise significant new funds, and so it closed in its three main target districts.

The beneficiaries then asked one final reasonable question: “What happened to the money promised to us, as awarded by our famous donor?”  800 families expected to share £60,000 from one donor for health benefits and new livelihoods.  They received none of the health benefits, and according to their own detailed records, just US$33.25 on average each, to 980 families in all from three or more donors.  Now with an exchange rate that averaged UK £1 = US$1.90, that converts to just £17,150 in total, far short of £60,000. 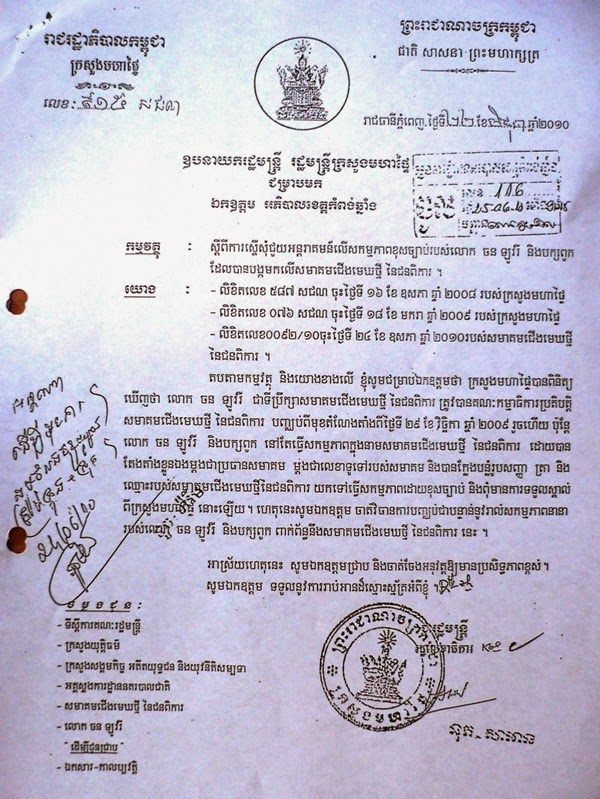 To date their question remains unaswered.  Regulatory authorities in Cambodia and the UK, and the donors have not helped them.  They want to know why was their external audit blocked, intended to establish the facts?  One senior Cambodian official ordered the external audit to stop.  He had no powers to stop an audit of the beneficiaries’ private funds. So another official sent a wider order to the provincial governor [right] “take any action to cease immediately any illegal activity” on my part.  So I went to see him and his minister.  Neither of them could explain what their ministry meant by “illegal activities” but they promised an investigation.  After many years, we are still awaiting the outcome. However, they have not curtailed any of my work since. (Some were pleased to see me go.)

Meanwhile the same question went all the way to the UK Charities Commission; to the Health and Parliamentary Commission, and the House of Commons Public Accounts Committee.  But so far the Charities Commission’s “discretionary decision” has not been varied “that it is prohibited from interfering in the internal administration of a charity”.

So anyone giving money to UK charities operating overseas should be aware of this.  Fortunately most charities do act openly and honestly, but it is best to make sure that you know their policies.  The best organisations have their claims about transparency, and how much of your gift ends up with beneficiaries, routinely verified by independent auditors. 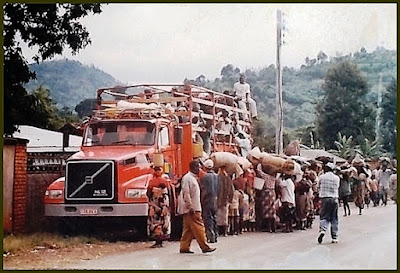 Near Ruhengeri on the way to Gisenyi "every man for himself" refugees were trying to board the truck for a lift home - previously such was their desperation they had helped themselves to the aid. The process had not been organized properly by the aid agency concerned.

24 August 2016 Fascinating: an encounter with another former colleague John le Fevre thanks to social media. His and my paths must have crossed in Rwanda.  His experiences mirror mine.  You can access his story here.