If Northumberland’s famous Chillingham wild cattle lived in Cambodia, they would be long gone. Sadly few people would have appreciated such beautiful unique creatures beyond their meat.  Cambodia may possibly have a distant bovine cousin of the Chillingham cattle, called the Kouprey, but this has not been spotted since 1957.

Cows, however do play an important part in Cambodia’s development, especially for the rural poorest.  I qualify that by saying that they can play such a role, provided the modern-day version of “rustlers” don’t have their way, as often as they do. And if good sense had prevailed, the country’s tourist industry would have gained lucrative income from the Kouprey, as indeed it could now – from elephants; tigers; sun-bears and so many other fine creatures endangered from poaching and loss of habitat for agro-industrial concessions.

My photograph above is of a young girl after we had given a cow to her family and community.  Her words are better than mine:

Kan Srey Oun (10) says “Our first cow helps our family.  She works for us.  She makes compost and will give us calves to sell so I can go to school.”

“Cows End Poverty” was a poster campaign - please see a framed copy below.  There is a great NGO, Heifer International, devoted to projecting this idea.

But now let me come to the modern-day rustlers.  Again I am going to complain about the short-term philosophy of too many donors. Yes, development projects based on cows can work well.  The finest for me is the Kon Kleng Community Based Organisation that developed a huge cow bank.   It succeeded due to an all-too-rare commodity - sound corruption-free management.  Too often “cows wander!”  That is what one big donor representative lamented to me.  “Their” cows were seen at the end of the project. They were pictured in the narrative reports and apparently checked by the external evaluators and auditors.  Then once the reports had been shelved to gather dust on shelves, the cows were gone.  The families were back to where they were 3 years earlier.  And this is all too familiar a tale in development projects.  I have argued for two simple lessons for years:

(1)  True ownership of assets must be with the beneficiaries, and
(2)  Post-project inspections should take place one year and two years later!”

I started a project in Kampong Chhnang province in 2003, and when visiting the target communities near the abandoned Chinese-built Khmer Rouge era airport, I kept seeing officials there – clearly government or NGO workers.  Authorities told us that we would be the only NGO operating there.  “Who are they, what are they doing?”  I asked.  “Oh that is Mr XXX, he used to work with YYY previous project.”  Now that information was easy to gain.  It took much effort and being sworn to secrecy to learn “He's collecting his gratitude payments!”  This practice is still endemic.  Clever officials make out to the poor people that the benefits came from them, not donors. The worst ones, the rustlers, even return to redeem the cows, once they know that they will get away with it.
You see the exact same thing in other areas where well-intended people offer solutions. Nowhere is this more apparent than in "ICT" (Information, Communication, Technology) where there is an obvious match between what Cambodian students want and generous people provide willingly. Unfortunately we've seen many provided, sometimes with accompanying "laboratories", only they seldom last long. One that flourished initially failed when the school would not even provide the electricity.
Too often plans for sustainability either do not exist or are mere talk.
And yet sometimes the simplest ideas are best. In another blog, we talk about "where there's muck, there;s brass, i.e. money". Compost is an obvious example, as many of our beneficiaries, especially children soon learned.  Today of course rice and other products grown in such a way, without artificial chemicals, qualify as "organic" products and carry a premium price that for farmers makes the difference between subsistence-living and upward mobility.
Families like Srey Oun's had no problem learning how to make best use of their cow.  While they knew the basics of compost, just a small amount of training and guidance enabled them to produce it in copious amounts. 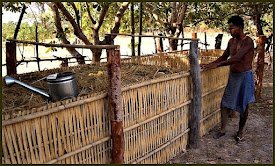 Foreign Aid Experts seldom advocate simple solutions. The fact is too many of them are Lords of Poverty who prosper while the "multidimensional poor" (to use latest jargon) remain in Dire Straits, - the name of our North-East England band whose song title "Money for Nothing" is apt.
In Cambodia, wealth percolates up, rather than trickling down, for reasons lucidly explained by Caroline Hughes and Tim Conway in 2003. Very little has changed since, despite claims otherwise. Officials have to repay their patrons, and of course make money for themselves, especially if they are on a low salary.
So will donors, listen to me?  Almost certainly they won’t!
It’s another inconvenient truth about the aid and development mega-industrial complex.
Why can’t the powers-that-be learn from Chillingham?

Great article about the "Dom"and his connection with Chillingham that I knew nothing about - have been sitting having a pint next to the great man? Dominic Cummings is Guru to UK Prime minister Boris Johnson, apparently the brains behind #BREXIT.  or it might be as those of us in Foreign Aid say: "KISS"'. Keep it short and simple.

I ventured to a newly-refurbished longtime favourite restaurant midway between my house and the Prime Minister's fortress in Tahkmau, Cambodia.  It seems some of the land has been divided and sold-off.  Part is taken up by a new venture and this impressive beast.  He exudes an ambiance, especially when dames are brought for him to fulfill his duty.  None of the diners seem to mind. I suppose that it makes a change from the usual welcome reception of hostesses lined up to greet you, as they take a short break from peering in to phones!