Something must be done about St Helena 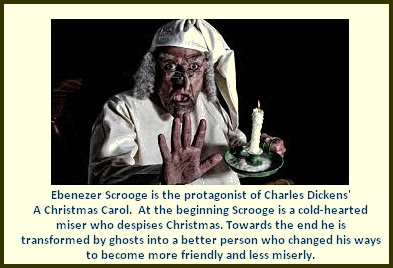 In the ions of history, BREXIT is the mere bat of an eye-lid.   By contrast St Helena in UK politics is a chronic irritating case of myopia.  Originally I was just going to do a supplement to my most popular blog on St Helena, thanks to re-awakening by Mr Ken Westmoreland after we shared some insightful exchanges.  Instead I decided on a Sunday morning blog to help us recover from our UK-election hangover.  If BREXIT is almost done, "Let's now get St Helena done!"


I am most grateful to Ken for kindly providing from his ample collection a number of works about St Helena as well as on related subjects – more of UK [ex-] colonies with a special focus on Gibraltar; on other small island states around the world, and on various governance systems. These topics were of course the subject of the UK House of Commons Foreign Affairs Committee's publication earlier this year.

There is a rich depth of material and some very distinguished analysies. Many of them agree on essential conclusions, most pertinent of which is that Saint Helenians seem always to end up with a bad deal irrespective of the best of intentions or not. One author Harry Ritchie in his book “The Last Pink Bits” says it better than most, perhaps speaking colourfully for many and for time immemorial. The last chapter was on St Helena whose people he described as being treated like scum by the UK, which moved him to the point of tears, and how the Overseas Development Administration (fore-runner of DfID) had, despite its consultants  having worked on things 'for years, and years and years, and come up with absolutely bugger all'.

l suppose with the actual building of the airport that jibe might be unfair, although of course the Whitehall mandarins cannot possibly claim not to have been fore-warned that this their most “generous” aid project for St Helena was not generous enough to accomplish its lofty aims. It was to generate extra tourism, revenue and investment so the island would pay its way for only the second year in a century and then beyond. We learned early on that the DfID business model to accomplish that feat was fundamentally-flawed. My own paper that anticipated the airport project shortcomings - perhaps  tempting fate - gave rise to sardonic laughs on the part of some MPs. 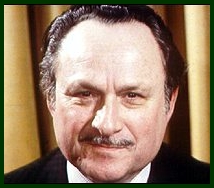 Psychology, as I keep postulating in my blogs, is as important if not more so than – to use awful Foreign Aid jargon – “technical capacity-building” which is of course always the “go-to” recipe for DfID and the Foreign Office’s to address shortcomings - "dispatch another expert". The latest is South African constitutional lawyer Jeremy Sarkin.  As the late Bernard Braine MP used to say while jabbing his thumb “Something must be done for St Helena”.
It is fascinating to revisit what he had to say back in 1982 and to see how apt it is still today. I like the "wit or imagination" comment.

“The Minister of State has rightly stated today that the importance of sea communications should not be forgotten. Of course. What is now blindingly obvious, however, was not always recognised before the Falklands invasion. I was delighted to see that Lord Shackleton saw merit in linking the islands with the excellent St. Helena and Ascension shipping service. I can perhaps reveal to the House for the first time that this was a major recommendation in a report that I made on St. Helena and Ascension following a visit I made there at the invitation of the governor and the Legislative Council in 1980.

In that report, which dealt with the neglect of St. Helena and its enforced dependence because of that neglect, I remarked that, to the Foreign and Commonwealth Office, Ascension, St. Helena and the Falklands, all dependencies in the South Atlantic, might just as well have been in three different oceans. Yet without Ascension we could not have mounted the Falklands rescue operation, and without St. Helenian labour we could not maintain Ascension.

St. Helena has a surplus of skilled and reliable labour, and we have been told this afternoon that the Falklands are short of tradesmen and skilled people. What happened then in 1980 when advertisements were published in St. Helena asking St. Helenians to go to the Falkland Islands and several hundred responded? Did that project founder on the question of return passages? Here we have a surplus of labour in one part of the region and a shortage in another, yet nobody in the Foreign and Commonwealth Office had the wit or imagination to see that the problem might be dealt with on a regional basis. What happened to the idea of finding an outlet in the Falklands for the loyal people of St. Helena?

Then again a joint shipping service is crucial to the survival of all three territories. Until the day dawns when it is possible to hold out the hand of friendship to a democratic Argentina, we have a duty to ensure not only air but adequate sea communications for all our dependencies in the South Atlantic.”

I gather from Ken that the "something must be done" was originally coined by John Marek.  Sending for experts might be a sign of doing something or is it really about “kicking the can down the road”. Saints simply shrug their shoulders and remark “Just another expert passing through.” They’ve seen it all before far too often.

Their perspectives are seldom sought or analysed in-depth.  Mind you, that is a characteristic of Foreign Aid generally. Seldom are “beneficiaries” in charge of their own "problem, solution, priority projects”.  That error was not made by Charlotte Parker in her excellent academic thesis “Repertoires of a St Helenian Identity”.  She took a disciplined at times forensic anthropological approach to try to discern “What makes Saints tick”; how have they evolved and what are the main influences?  She winkles out a lot of what too often remains unsaid or is not said to outsiders.

It takes much time to get to know people intimately no matter if there is built-up institutional knowledge or not to be passed on. The UK Foreign Office used to pride itself "on throwing its envoys in at the deep end".  Even more than time, you need good knowledge of behavioural sciences, to cultivate the right circumstances where people give of their best.  You can’t cultivate that with short postings abroad of 2-3 years. All the experts have never tried to explain why Saints do much better off their own island than on it. Charlotte does well to shed light on that conundrum.

Ken Westmoreland has acquired both a masterful knowledge and a fine collection of writings, some of which would otherwise be confined to dusty archives in the bowels of Whitehall and similar in all those far-flung outposts around the world. One by Alison Quentin-Baxter caught my imagination as it examined not just St Helena but Niue that of course I had identified as a suitable example for St Helena to emulate (if allowed by the UK.) See also Ken's archive from her.

Now my mention of Niue was very different from many writers about St Helena including Ken, who press for some form of closer formal relationship with the UK, even of direct representation, with innovative suggestions including a connection with the large St Helenian Diaspora in places like Swindon. I would be all for that but I think St Helena needs to aspire to be on a par with equally small island communities like Nieu who speak up for themselves. They are more independent. They still receive aid but they have broken free from the shackles of colonial masters, to reach out to a wider world that is often more generous.

St Helena can only be represented properly, truly and authentically by one of its own, not some nondescript British civil servant as Governor dispatched by London to keep the natives quiet for another stint of 2-3 years. Besides his or [just once in history] her task is impossible, for even their bravest and brightest. They are also charged with delivering the “Fagan” message. 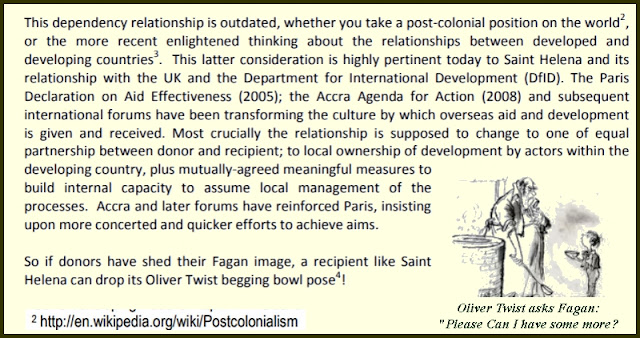 Ironically I suspect the UK relationship with St Helena would improve with greater autonomy, in fact to change towards the “more equal partner” that I talk about between “developed and “developing” countries  envisaged by the Paris; Accra, Busan and other Foreign Aid Effectiveness” conferences.  Surely St Helena is as entitled as all the other “small island states” to pursue assistance from whoever might give it - China; US (via Ascension workers), Portugal, and France, etc. It has ties with all of them in one form or another. That is of course unless “Fagan” does a “Scrooge”, has a sudden revelation and wakes up a changed man.

Change there most certainly should be.  Has Britain ever paid fair dues for St Helena’s services to it?  It exploited the island as a naval way-station and prison, and does similar with Saints emigrating to work for it. Some of us know the post-WW2 100 men and domestic servants sent to the UK and its other realms.  Who keeps gaining most from St Helena Island's loss?

I wonder what a fair rent would be for appropriating St Helena to detain Napoleon; “freed” slaves, and Boer prisoners-of-war?  Was rent ever paid?  If not it’s overdue and I bet it's worth a lot more in today’s money than an airport or two.

Before I conclude I will point out one more notable paper rescued by Ken from its dusty fate, hopefully to rest in a cyber-space cloud for posterity so future generations can look back.  Will people be still para-phrasing?


"Something must be done about St Helena!”

More reading:
My other blogs about St Helena

The easiest way to access my blogs is to use online search engines and enter Helena.
Here are links to the most recent one(s) and the most popular measured by direct viewings as on 16 December 2019.  Actual numbers are higher as they are picked up via Twitter and other Social Media. My new website www.johnlowrie.uk also includes some as well as my main paper on the island’s tourism plans and hopes.

See also this blog where I talk about Island music including the “Dave Mitchell” anthem:
http://anorthumbrianabroad.blogspot.com/2014/10/alnwickdotes-no-7-best-laid-plans-of.html#more (130)