Who am I to judge?”posed Pope Francis in 2015 when asked about gay people.

No-one should be surprised that “full marriage equality” was not achieved straightaway on St Helena.  It has been a struggle everywhere else in the world. (For non-St Helenians, please read Lermarc's all-too familiar story below and the grand finale.)

Whereas countries like Ireland and New Zealand have embraced it, there are many others from Australia to Africa and across the world yet to adopt the change.  Yet it’s probably only a matter of time. We've come a long way in a short time.


In my naive youth I had the good fortune to go to what is today Kingston University. I remember the freshers’ stands where new students like me could find out about the extra-curricular life.  Kingston was well ahead of the times.  The largest club or society of all was the gay one; more members than sports and social clubs.  There I met our famous androgynous couple, David and Angie Bowie.  Lou Reed was the first fella I saw in a frock. Soon I learned that there is little harm if any in gay folks.  Surely more harm  is wreaked on the world by macho-males? The second largest club at Kingston was of the overseas students, and there too the redeeming lesson was we have nothing to fear from people who happen to be different to us.  History now shows that Kingston’s early enlightened position was adopted by the UK in various progressive Acts of Parliament.

Therefore patience and persistence is needed.  The moral argument will surely prevail in due course.

In the meantime, if we cannot change hearts, let us try to change minds with some hard-headed logic.

I want to make the case that St Helena needs all the talent it can muster, from home and abroad, if it is to develop properly.

There are two Saints I knew well on the island who suffered terribly because of their sexuality.  We played a small part in helping them to the UK.  I met them there less than two years later.  You could not believe the difference in their demeanour and self-confidence.  Both had blossomed, at work as well as in their personal lives.  Both have attributes and skills needed at home, currently provided by expensive expatriates.

It is an inescapable fact, as people have heard me say often, that too many Saints do better off their island than on it.  Being gay is only one reason.  Human beings are rational.  Every exiled Saint makes the best decision for his or her family and himself or herself.  At the moment it usually means remaining as an exile, perhaps with little chance of returning home for visits or permanently.  This Diaspora is an untapped talent.  How many could do jobs at home?  How many with their newfound worldliness could contribute in other ways, including improving the choice of candidates for public office?  They would make for things to be less parochial?

It was on the island that I first heard the phrase “It’s not what you know or who you know, but what you know about who you know.” Does that not get in the way of your best talent being tapped?  I fail to understand, for example, how someone with clear leadership skills like Rodney Buckley, would lose out in elections to largely untested unknown strangers.  Oddly, far too often the island’s fate is entrusted to untested unknown strangers in the form of every expatriate who arrives for the first time.

I make that point as a qualified human resources (and rights) professional.  My career has been about nurturing best leadership that makes the best use of all resources – people; capital and money. We try to avoid bias.

In Cambodia the gay community has struggled in unimaginable ways.  During the rule of the infamous Khmer Rouge in the 1970s, when millions died through cruelty, they were targeted as were too many other groups classified because in one way or another they were “different".  Only in the last decade have things begun to improve. It was the late revered King Sihanouk who in 2004 gave a powerful lead when he argued in favour of equality.  There is now a vibrant Rainbow Alliance.  Some of the best hotels and restaurants are “Gay-friendly”or “Gay-run”. They are among the busiest and most profitable.

Saint Helena Island will fare better if marketed as gay-friendly.  It is placing its future almost exclusively on tourism now that its airport is operational. It would be unwise to deter such a large and profitable potential group.

There is still a long way to go in Cambodia, but at least life is better for the young girl photographed above.  Born a boy she is now content to be herself; able to make a living (of sorts) with less prejudice than before, and soon she too hopes to be able to marry who she wants.

Who are any of us to deny her such rights and contentment in life? 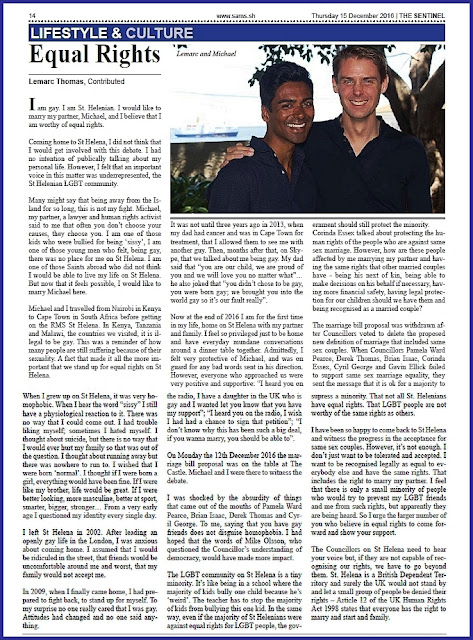 Original full pdf copy can be accessed from the Sentinel here. 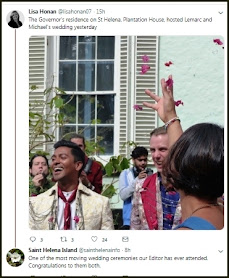 The Governor has announced that the Legislative Council has passed a Law to allow same sex marriage.  Well done to all. Australia of course has also now ratified such a move after its national referendum.

Lovely posting from Governor Honan to show "All's well that ends well" but it has been a tumultuous journey for Lemarc and for the people of Saint Helena.  It is an island and a people that for reasons beyond them is stuck too much in the past, when all most folks want to do is to move on. They want to be part of the modern world.  They want to make their own way, balancing tradition with modernity, not beholden to others. 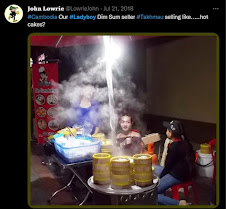 Transgender people in Cambodia still struggle to be able to live ordinary lives and to be accepted like everyone else. Many retreat in to twilight professions.  Here is one brave Dimsum seller making their way in everyday work and enterprise.
Update May 2022
One of the best foundations I have worked with is Heinrich Böll that supports indigenous people as well as their environmental work. I was pointing a new young reporter in their direction when I came across an excellent small film "Where do I belong?" of transgender entertainers in Cambodia. They are most articulate as advocates for why Cambodian authorities and Society need to be much more enlightened. Their message should spread much wider. 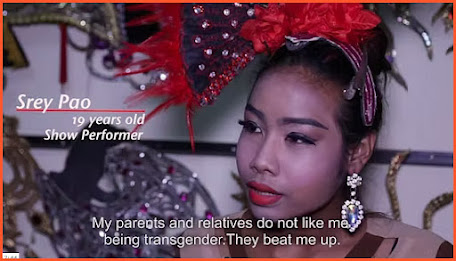 My most popular blogs about St Helena:

For others, just post Helena in the Search engine. 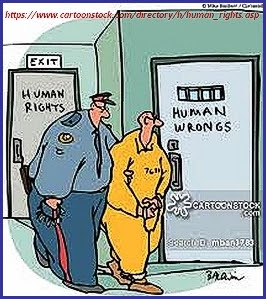 Whenever you post something on social media, you are surprised pleasantly or otherwise, that someone takes the trouble of replying.

My guess is this someone is from St Helena; remembers me, and my answer will conform to his or her expectations. And I will.

The question they posed was “Does St Helena need a human rights office?”

As a veteran of human rights with experience in the two worst countries with human rights tragedies last century (Cambodia and Rwanda), he or she thinks that I am qualified to say.

My answer is almost certainly what they expect.  No!

But it is a qualified No!

I am not convinced that the outstanding human rights issues that afflict St Helena should take priority over other pressing demands on public sector money. Plus, you have other mechanisms for addressing them that may be more effective.

There is always a case for a multi-functional human rights office if it provides a contribution to a better, fairer society and administration, especially if a host country is clearly lacking in meeting its obligations. This why the United Nations provides “Special Rapporteurs”.

The main case for “No”, you do not need a human rights office, is straightforward.  If you look at the basic universal human rights such as the right to live (not to be killed arbitrarily; to die or suffer through mischief or neglect, etc), St Helena must be top of international rankings.

Then we come to what are, and we can’t avoid them, human rights technicalities.  We must examine the full gambit of human rights – civil, political; economic, social and cultural.  I will not bore you with the United Nations instruments; suffice to say that they do constitute international law and are legally binding on the UK and St Helena governments.

In terms of most civil and political rights, and the main economic and social rights (rights to education and health, your colonial administration, despite other faults, has been exemplary.  You enjoy better rights than most of the rest of the world.  St Helena really is a haven, especially for children.

So should Saints relax given that comfort? Well, No, the fact is everything is relative and nothing should be taken for granted.

If you have residual unfairness in an organization or society, then it does not bode well.

The fact is most of the world’s trouble spots consist of people who are aggrieved and what upsets them has not been addressed.

Minor in comparison, there is almost certainly unfairness still on St Helena: because of gender with or without violence; because certain families enjoy privileges over others, or as more topical of late due to sexual preferences.  So there is an unfinished agenda as indeed there is in every country of the world.  Please do not make the mistake of thinking that countries like the UK have human rights sorted. So there is only a problem in other less advanced ones that feature in the world’s news.

There are also special problems peculiar to St Helena due to being a small close-knit community where everyone knows each other.  International standards of justice mean that it is hard for an accused in such a small population to have a fair trial.

Similarly when it comes to “consumer protection”, how do Saints get a fair deal for the goods or services they buy when they are faulty?

Similarly when it comes to public administration, how do Saints get a fair hearing when they are aggrieved about decisions of the Saint Helena Government – and how can they be sure that they do not suffer repercussions from exercising a right to complain?

So there are legitimate functions for a human rights office, although they could be met in other ways.  At the end of the day, as with many other decisions, you have to balance the costs of a specialist service versus its particular benefits.  It is for Saint Helenians to assess, to make the case amid competing demands to the UK government and local taxpayers.

I would imagine a body modelled on the UK's Citizens Advice Bureau would work well, if suitably independent and adapted. It may even help to reduce cynicism and apathy by providing a credible bridge between government and people.

Human rights feature in many of my blogs for several reasons.  Disadvantaged groups like disabled and indigenous people miss out in life generally and in development opportunities in particular.  Then children, especially but not exclusively girls, continue to be abused with recurring inadequate responses and care from adults who could and should do better. The dubious orphanage scandal is one that human rights workers like me tried to stop before it escalated. We failed.

In 2016, the cause of human rights is set back.  Various international developments have meant that they are no longer prioritized.  In some cases a conscious choice has been made to disregard them despite evidence of abuse and official/previous commitments to uphold them.  At times, the truth is papered over.  Here are two blogs about human rights.  One predicts that the pendulum will swing back sooner or later.  I just hope that it does not take another Cambodia or Rwanda tragedy to do so.  There is also a more studious article I worked on that stands the test of time.