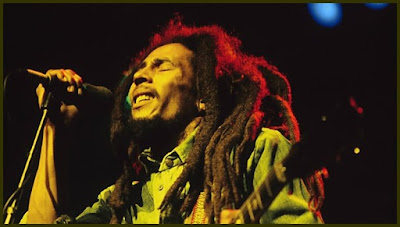 The BBC World Service airs some brilliant shows. One today (8 August 2019) surrounds the topic of Bob Marley’s “Songs of Redemption”.

It gave me “Emancipate Yourself from Mental Slavery” the final hook needed to complete my long-held contention about why the UK constantly fails in its efforts to make Saint Helena Island self-sufficient.

In fact whenever I hear Bob Marley I always think of St Helena. Even though Caribbeans are quite different, they do share with Saints common British colonialism and slave origins from Africa.

Songs of Redemption is both introspective and meant for an outside world. Lyrics in songs like this do convey messages, not always obvious, sometimes inadvertent, and often compelling – if the words are heard and understood.  Saints have been singing them for many years.

This broadcast came soon after ceremonies to mark 400 years of slavery in Ghana.  St Helena was used to help stamp out the slave trade. The remains of many who died there were unearthed for the building of the new airport. Their genes are a big part of the melting pot of the DNA of today’s Saints.

The late great Stedson George, former Head-teacher, self-confessed maverick, used to say “It’s the slave-like mentality”.  I heard him say this often to explain aspects of local behaviour that many expatriates found incomprehensible.  Few ventured to ask more. It was politically incorrect to do so. If asked, he was happy to explain that slavery does have some advantages. You don’t have responsibility. You don’t have to worry about your next meal. Life is simple if you are a dependent. It suits some. It can become deeply-ingrained. Yet it is not a natural human characteristic.

The first song I think of when describing Saint Helena is Blue Mink’s Melting Pot:
Take a pinch of white man
Wrap him up in black skin Add a touch of blue blood
And a little bitty bit of red Indian boy.....
What we need is a great big melting pot
Big enough enough enough to take The world and all its got And keep it stirring for a hundred years or more And turn out coffee coloured people by the score

Even within the same family you can see markedly mixed physical human features – dark skin and blue or green eyes. Rodney Benjamin has that distinction. Two dark-skinned parents might give birth to a light child - “a throwback” I was once told.  Fortunately unlike in the rest of the world the fidelity of the mother would not be questioned. Besides Saints have absolutely no time anyway for ideas like “The sins of the fathers vested upon children”.

A former slave, Frederick Douglass, found his way all the way to my part of the world in Newcastle and made quite a name for himself.

The next song in a similar vein was a favourite with Cheryl Bedwell (née Anderson) and her teenage friends like Louise Benjamin, who was nicknamed “Bob Marley”.  It was Boney M’s “Brown Girl in the Ring”.

Many Saints, at least in my era, would argue that Judy Boucher would personify how they feel.  Her reason for “Why I can’t be with you tonight” is not the same as theirs. Many families are separated because family members leave the Island in search of work and fulfillment not available at home.  They must escape to break the shackles of mental slavery.  What they leave is the team without some of its best players. 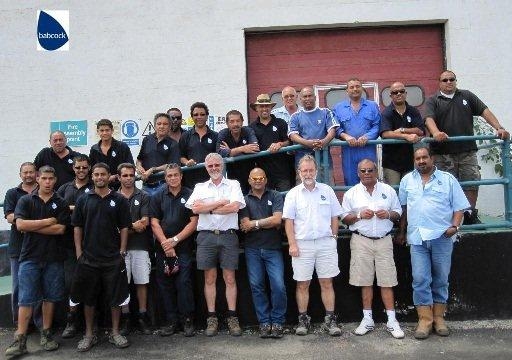 Saints working away from home on Ascension Island, the nearest home-from-home too – Image the-islander.org.ac

Johnny Carter, once the Customs Officer by day, is an enduring star singer by night. In my day his turn with the Standard Band or Syncopated Saints would start with “Wooden Heart”.

Treat me nice, treat me good
Treat me like you really should 'Cause I'm not made of wood
And I don't have a wooden heart

So please look carefully at all of these lyrics and underlying sentiments. They’re saying something to an outside world.

They tell me what my academic and professional skills have been telling me for years.  I am [in today’s parlance] firstly a worker in human resources; secondly one in human rights (pro-actively retired too).

The objective in human resources is to get the best performance from your people. The objective in human rights is for all people to be treated fairly.  The two schools of thought are about facilitating individuals to achieve their maximum potential in life.
You don’t get that by treating badly the ones around you – and please be under no doubt, if they feel that they are getting a bad deal – DfID and your constant give-as-little-as-possible hand-outs to St Helena please note – morale does inevitably suffer.  You are fostering dependency, not enterprise nor a spirit of self-sufficiency. It doesn’t tell Saints to:

You don’t get people to try their best anywhere if you keep letting them go and do nothing to make it worthwhile staying.  In my day – I am sure it is the same today – the salaries and rewards to [often less qualified more inexperienced] expatriates were vastly superior to local Saints able to do the job as well or good enough. My persistent question is "Why do Saints do better off their island than on it?

Young Saints do aspire to higher things. Many accomplish it. Most one way or another can only sustain their success off the island, not on it. Some stuck at home want to emulate their exiled friends but can’t. Many do try their best but their best efforts fail for reasons beyond their control. That has been the fate of those who invested money and effort in the greatly anticipated but non-materialised post-airport tourism boom.

How do they feel?  How do people feel on the Island if they are there through no choice? How do people feel if they are doing a job they love but feel that they are inadequately rewarded?  How do they feel if their job is an artificial way of receiving a handout to live on at a basic level only?  Remittances from loved-ones abroad to top up income or pay for special items, while welcome, are still acts that confer dependency.

The wooden hearts in development assistance must address the human spirit before you Saints can:

Many Saints have settled in the mother country, ever since “the 100 men” helped to rebuild post WWII Britain, and of course our successful campaign to have their full UK citizenship restored.  Many make an annual trip to Reading to catch up with old friends and family. 1,700 in this feature – almost as many as half of the population remaining on the island.


St Helena's "100 men" and their descendants could so easily have been caught up in the "Windrush" hostile environment roundup if we hadn't succeeded in persuading Tony Blair's government to restore full UK citizenship to Saints.  At least in that regard something good was done.

1. My article that pre-warned DfID its airport/tourism plan was flawed can be accessed here.

2. My other blogs on St Helena can be accessed via my most popular one.


“More to St Helena than Naploeon”.

3. Twitter is now a very good way to keep in touch with UK politicians who take a great interest in St Helena - such as Lord George Foulkes who I have dealt with since 1987.  In fact you just need go in to Twitter and search "lowriejohn StHelena".  John Lowrie 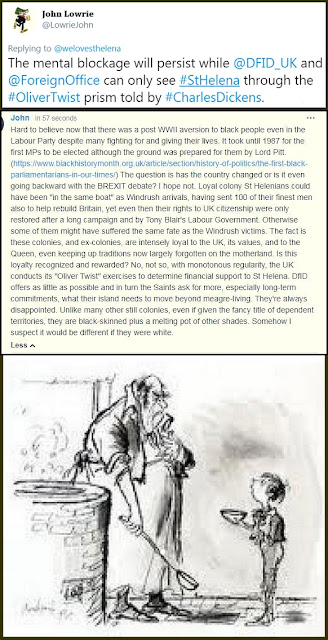