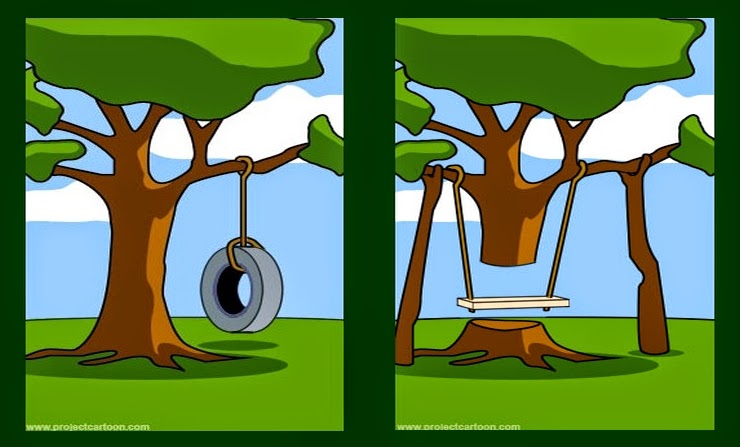 What the children wanted                 What the committee came up with!
Do you know that children out-perform adult executives?  Yet they play little or no part in “development” projects intended for them.  In 1998 I inherited technical and fundraising responsibility for a major multi-donor funded project to teach human rights in schools.  I spotted one thing that had eluded the educational and development experts.  The entire programme was being carried out without one child in sight.  We soon changed that, but it wasn’t children that spoilt the project.

If ever there is a quotation to apply to our line of work, it must be this one.  It could be the motto of the development game, even its guiding spirit!

However it predates such modern fancy notions, coming from a poem by famous Scottish poet Robert Burns. I have it on good authority of our local paper that “he was inspired by his travels up and down the length and breadth of Northumberland, so that is good enough for me to claim him for linking my county with the developing world. Apparently he did visit Alnwick Castle, Warkworth and Hexham.

As this is an Alnwickdote, it is another one of those strange occurrences in my overseas development career, one that fascinates many people.

And just like a previous one, it begins with me sitting having a beer around 1994, a Carlsberg Green, at the community centre on Likoma Island in Lake Malawi. (For more on the fascination with islands, see below.)

We had just arrived on Likoma Island from Nkhata Bay, after the usual 7 hour boat trip.  By now it was an established routine.  The locals would see us coming.  The women members of our Likoma Maize-Mill Project would arrive to sing us ashore with a welcome; carry our bags to the guesthouse, and then I would make my way for a warm Carlsberg Green.  No refrigeration or ice in those days.

Suddenly the quiet sipping of my beer was interrupted by the noise of an aeroplane circling overhead.  Now flights to Likoma Island are rare.  There is just one simple sandy landing strip and normally it is not safe to use in the wet season.  Anyway I carried on with my own thoughts, until during my third beer a very sweaty pilot came running up to me.  “Mr John, Mr John, we need your help!”  I was quite used to being the only foreigner there and everyone knew me, but why me? “Do you have a winch on your boat?” “Yes, we do!”  “Can we borrow it.  Our plane is stuck in the sand!”

So the crew went for the winch.  I gave him a warm beer, and then we headed to see his pride and joy, or his future career, sinking slowly into Likoma’s pristine sand.  On the way I saw wedding guests around the Likoma’s remarkable cathedral.

They were indeed well-to-do.  They had chartered the plane for a quick hop to Likoma for their church service, then straight back to the luxurious Club Makokola on the shores of Lake Malawi.  Best laid plans go awry?

Unfortunately the winch was not strong enough. “Where can we get a stronger one?’ We had one, but back in Nkhata Bay. “Please go get it, we will pay whatever….” So my boat made the 14 hour return trip, but only after I insisted that the crew must rest for at least 4 hours – they took 8! We also brought planks, such things never lasting long on Likoma where fire-wood was at a premium.

The pilots, air-crew, and wedding guests all spent their night on the island, or most of it.I wonder if the Club Mak reception went ahead anyway?  By chance one of the Lake’s steamers was passing by not far, so we radioed it to ask the Captain to kindly pick up the wedding guests.  So instead of the champagne, lobster and caviar, they dined on the steamer’s excellent fish and not-so -excellent “nsima”. (That is very much an acquired taste – see below.). Their banquet was washed down with the usual copious supply of Carlsberg Greens.

Now I will finish this blog with an actual experience of “best laid plans going awry” in development and on Likoma Island.  Our Maize-Mill project was simple.  Instead of school-age girls having to pound maize by hand for several hours every day, they could use a mechanical maize-mill.  So the girls could go to school. Maize (corn kernels) is made in to flour to make the staple dish “nsima” of East Africa.  One day, the women radioed us to say that their machine was broken.  So our mechanic joined our next trip.  He found metal objects in the works.  Someone had hidden them in a bag of corn to sabotage the mill.  The women knew the culprits – the menfolk and the boys!  So the Island Chief, and a former Government Minister* on that trip with us, called an island-wide meeting.  The men assembled under the shade of the trees, and as is customary the women and children sat on the ground in the sun.  The ex-minister pointed his finger at the men and boys, one by one – angrily demanding “Do you love your mother?”  Each one nodded shyly. Then pointing to some women and girls, one by one, he said firstly “This could be your mother!” Then he said “and this girl could be your sister, and a mother in future!”  Then with a flourish, he instructed them “Treat every woman and girl the same way as your mother….or else!”

And at that point everyone scurried away.  For those of you unfamiliar with African culture, the else could only refer to one thing that the missionaries who built the Cathedral never bargained for, the ancient belief in spirits.

Anyway, somehow that night, a repair took place to the Maize-Mill, saving our mechanic a job.

A fellow volunteer of that era benefitted too from the ancient belief in the power of spirits.  His backpack was stolen much to the disgust of everyone in the community he worked with.  They called their “medicine-man” who conducted his ceremony.  And next morning the backpack with all goods intact mysterioulsy found its was to his door!

* At the time of posting I cannot remember the name of the former Education and Foreign Minister, one of the youngest in Hasting Banda’s cabinet, until the two disagreed.  Next time I see an old computer with a floppy disk drive, I will look him up from my records.  I can’t trace him in an internet record. He came from up the coast from Nkata Bay near Chikwina.

The Fascination of Islands and Music

I was reminded in answer to these posts that many of us have a fascination for islands and the unique way of life, especially when you are marooned there, by force of nature or because no transport. For me, as a child, Coquet Island, Holy Island, and the Farne Islands were my first.  And of course when a local band called Lindisfarne became famous, I was a fan; in fact I booked them to play at Kingston University, and of course understood what the lyrics "Fogon the Tyne all mine" meant. (One member still plays live at the Cottage Inn, Craster.)

Years later I lived and worked on Saint Helena Island, the subject of many blogs, and two songs so popular, almost anthems stick in the mind "Dreaming of a Little Island" played almost as much as "Why can't I be with you tonight".  I would also recommend Stuart Carolan singing Naploeon's lament on being exiled there?  However the song that stirs the heart-strings, especially when the RMS pulls away from the Jamestown anchorage is "My Saint Helena Island" by Dave Mitchell.

Years later I was incredibly luck to land what must have been one of the best-ever VSO (Voluntary Service Overseas) placements as Director of the Likoma-Chizumulu Fisheries Development Project.  I spent much time on the two islands, usually as the only expatriate. I see now that there is a tourist video - they seem to have captured the atmosphere well.  I also say more about my work there, and about Saint Helena in this blog:

Now there are more islands that I wish to cover, but none more so than Saint Helena.  It is the only place where I have the same feeling as crossing the Tyne Bridge south, leaving home.  There is a malaise on the RMS St Helena.  OK it may not last beyond a day or two, and those passengers excited by their trip away, maybe for the first time, are different, but for most of us and the Saint crew, it's npt a pleasant feeling.  Only that it is compensated by the opposite feeling at the end of the return journey.  No place like home!

On the future blogging list, to evoke similar emotions, will be Ascension Island; Tristan da Cunha; St Mary’s (Scilly Isles); a return to Holy Island that has/had a St Helenian there; Penang in Malaysia, and Zanzibar.  Perhaps the "Are they Vietnamese or Cambodian islands?"
Posted by ANorthumbrianAbroad