Alnwickdote: No 8 Island of Propriety in a Sea of Corruption

Holy Island was the first island we knew when growing up in Northumberland.  The county is graced by many ancient monuments, from Tynemouth in the South up to Lindisfarne and beyond in the North.  In this sense, there is a direct comparison with Cambodia and its great religious relics most notably Angkor Wat.

Looking at these images reminds me again of the oddities and absurdities we encounter in the development aid business.  I am talking about the spoken and written words, and barriers to communication in language and in context.  Too often people do not understand each other, and it only bothers poor people who are too shy to ask.  It is not only the English and Americans that are divided by a common language.

There is one obvious feature of the relics pictured above and of many such places.  Please take a close look to try to see my clue.  All will be revealed below.

When the head of a major donor agency implored me not to be an “Island of Propriety in a Sea of Corruption”, I do not think he contemplated how that could be translated in to Khmer.  I have of course often pointed out the problem in Khmer that whereas “honesty and loyalty” mean the same and are just one word, the antithesis only permits “disloyalty”, so if a person remains loyal to his patron, he cannot be dishonest, etc.  You have to take great care to get your message across, and even more importantly to understand any reply given as well as a lack of reaction.  Smiles and laughs can be deceptive.

Normally, my main complaint is in the academic and technical English language employed by development experts.  A cursory examination of any World Bank report, for example, will show the difficulty that even native English speakers have in deciphering what they mean?  I recall having a torrid time with a Secretary of State in one ministry.  His conversational English was good.  His main aim was of course to persuade me that I should divert money to his ministry.  As with most of my projects I avoid such provisions in approved budgets. However, he addressed the issue indirectly by repeating “Look you want to do things that my ministry does not approve!” “Which ones?”  I asked. “Well take….” and then he cited several of the planned activities.  I asked him if he recognized the exact English words.  He said that he didn’t.  Then he looked for endorsement from his usual accompanying group of colleagues, all shaking their heads in agreement with him.

Well, I said, “I suggest that you take a look your ministry’s five year strategic plan!” And showed them where we had taken the words from.  (By the way, in donor-speak, that means we were specifying “potential synergies with other initiatives!”

Of course as is typical of the Cambodian Government, an international technical consultant, paid by foreign donors, had been commissioned to draft the plan…..in English.

I have never been forgiven for causing His Excellency to lose face, and sadly the project that would have helped this little disabled Cham Muslim girl never obtained the go-ahead. (There is a sequel to this story, its link to resources going missing in Foreign Aid and who might be punished for it.) 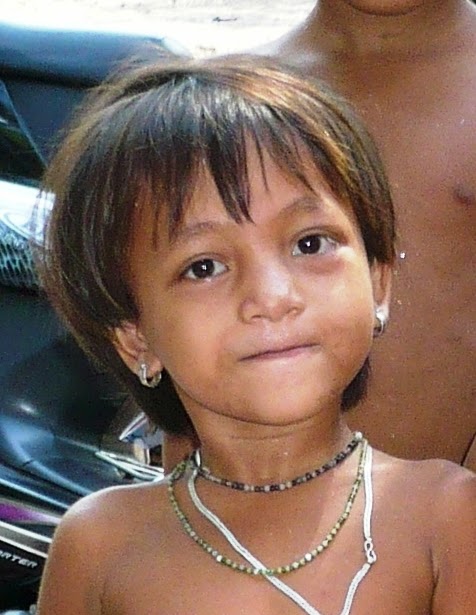 Now that same ministry not long afterwards was presiding over yet another of the many donor-funded international conferences at one of Phnom Penh’s 5-star hotels.  This is of course the favourite way of “tackling development problems, alleviating poverty alleviation, etc”.  The consultant from the United Nations was in full flow extolling the virtues of his key-note theme.  Simultaneous translation was taking place, and by chance I tuned in to it through my ear-phones.  All the dignitaries, distinguished guests, officials and NGO workers were listening attentively, or pretending to do so.

After 20 minutes, with just ten minutes to go before the free sumptious buffet lunch, I stood up to alert the consultant that his key note theme may not be being understood.  He was there to persuade authorities to be more sympathetic towards disabled people, especially in  improving their prospects of employment.

He kept saying “You must instigate open employment policies….”

“You must find jobs [for disabled people] in houses without rooves!”

So if you see any disabled Cambodians at Lindisfarne or Tynemouth Abbeys, you will know why!

Finally, yes I do belong to the rooves not roofs school.


Quite often what constitutes corruption differs between people and their interpretation of it, although personally I think that everyone knows perfectly-well what are “ill-gotten gains". In another blog, I refer to the fact that “commissions” in Cambodia can be regarded as mere gifts given “spontaneously” by a contractor from his revenue to an official involved in awarding the contract.

This is why the Anti-Corruption Unit took no action against officials found by the Global Fund to be indulging in the practice. How many expatriates know that when they rent a house or office in Cambodia, one or even two months rent per year will be paid as “commission” by the Landlord or Landlady to whoever helped arrange it? And neither will tell you!

Officials can be ingenious in how they “collect their dues”.  It took me less than a week in Cambodia to see that when “per diems” are paid from donor funds to participants in training courses – a nasty habit brought in during the UNTAC-era but a scourge of foreign aid everywhere – the sum paid in person in actual cash was less than the sum in the costings in the official budgets. Oddly, people unabashed simply signed or thumb-printed for the higher amount. It was, and probably is still, an accepted practice.

I decided to end it and changed the arrangement so that the full sum of cash was paid during the afternoon break. This had one more advantage as participants also had to stay all day instead of bunking off unlike happened when it was paid before the morning session.

I thought that I had done my duty.  The new arrangement seemed to work well.  I was wrong.

A good six months later, after completing training with security forces, on my way home I realized I had forgotten my training aids. I asked the driver to return for them.  The classroom was still full, participants were queuing up.  At the table was the very senior co-course organiser, who was a government minister no less, with his assistant collecting cash back from every participant.  It was only what he was entitled to, after all, wasn’t it?

Finally, one more aspect about "being around a long time" in Cambodia, is you come across the same names, sometimes similar improprieties, often new ones.  A character in this blog cropped up in a later one too.

In response to questions, including those raised by my finale blogs as a resident regular human rights and development worker in Cambodia, I need to explain the fall-out from my "Island of Propriety" story. Indeed as my good friend and colleague John Vijghen opined there has been inconsistency on the part of donors to people like me. On the one hand, they must - or should - support standing up for principles, especially ones that their countries and governments espouse. On the other is the desire to remain on friendly terms with their hosts in Phnom Penh. They have to do business with them, "not rock the boat" and of course prove in the constant social rounds to excel as a "Bon Viveur".

People who know me will know that to do our work we must raise funds and that means "doing business" with donors. Sometimes friendly relationships count more than technical skills in project design or even accomplishments and impact. Whether as an adviser or country manager back in the years until 2005 or so, this community was actually quite small, and so people like me were on the Embassy lists.  I attended some but missed others as I believed in devoting my time to supervising and inspecting work in the provinces, not talking about them in Phnom Penh.  Not long after reporting to one Embassy that one of its officers solicited me for a bribe in order for my NGO to receive funding, I noticed I was no longer invited to their 'do's.  It set a pattern.

The most peculiar one was after a UK Ambassador left on completion of his tour of duty and a new one arrived. This was not so long after opening up of Cambodia after the final capitulation of the Khmer Rouge that I witnessed. A lady with a Germanic English accent called me from the UK Embassy. She explained that they needed to revise the invitation lists as the numbers of guests especially for the Queen's Birthday party had grown. She went through her checklist of questions and seemed impressed by our "localisation" of my former UK-funded NGO Ockenden. "But" she posed "So you are no longer a Country Representative?" I replied "Yes, I am but my new organisation doesn't use that title but I have the same responsibility". "Why not?" "Well they wanted to get away from the top-down boss image." "Hmmm, not sure about that but you are the top paid person there?" "No, not at the moment, in fact I am working voluntarily as we are between funding, and it's my job to raise funds, so while we're short I'm allocating what we have to pay all the local staff not me".  "Hmmm! I will come back to you."

About a week later one of the Cambodian staff at the UK Embassy called me. We knew me each other from various contacts over the years. She told me that my invitation was ready for collection. So I made my way all the way across Phnom Penh from Takhmau to the Embassy through the elaborate security checks, to the reception to collect it.  Now we all know when Cambodians are embarrassed and uneasy. It's a different kind of smile. Someone had made a mistake and I had been rejected from the invitation list.  In fact I am far from alone. Many long-time residents and workers in Cambodia are not wanted at these kind of receptions.  Personally I am not that bothered about missing out on the freebies and chat but the way they go about these things leaves a lot to be desired. More importantly though is what does it say about Embassies either taking full advantage of local knowledge or their true commitment to principles and standards as opposed to currying favour? 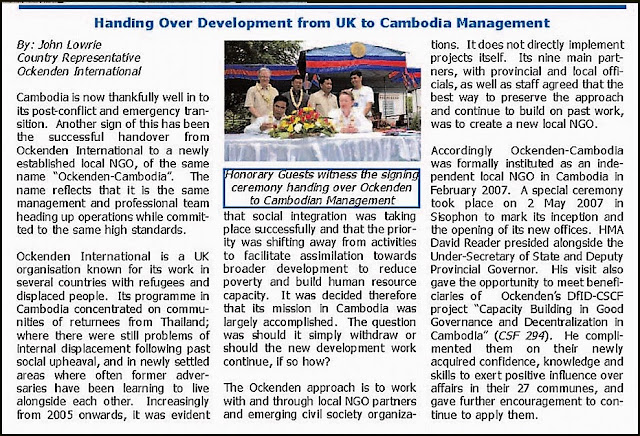 The title of this blog, and more, is quoted in this investigative journalism article by Jack Davies.

A personal anecdote as tweeted on the same theme as the title of this blog - explaining but not excusing corruption. No doubt though you do not have far to look to find microcosms of what afflicts Cambodia and Cambodian Society. Buddhism, the way it is practised now and interpreted means that the country still lacks a moral base. 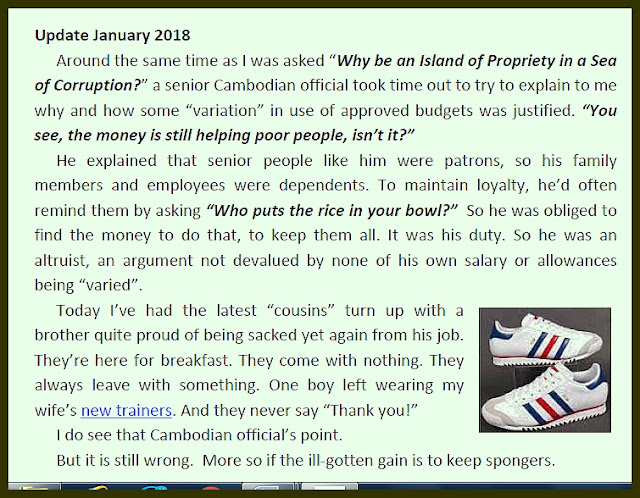