He who pays the piper, calls the tune? 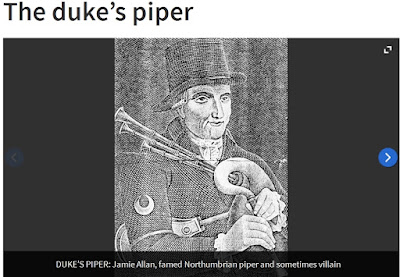 Very often, too often in developing countries like Cambodia, there are “Westerners” who exude the same superiority complex.  They believe that because of their better education; and coming from their more advanced/sophisticated home country – together with their money - they can bring improvements to bear on these needy folks.  In this sense, the old missionary concept lives on, only with a development rather than religious slant.

They can be sorely mistaken.  I often remind such well-intentioned if misguided souls that it was not so long ago, that our countries were not so civilized. (Please refer to a previous blog.)

I wish to start this blog in the same way, having come across another “worthy” character of our mutual heritage, helping to make my point. My thanks to Keith Proud for the story of Jamie Allen - “famed Northumbrian Piper and some time villain”.  (If you want to see and hear the Northumbrian Pipes, you can listen and enjoy Northumbrian scenery here and/or click here.

You see I keep thinking about the over-arching role that money plays in getting things done, or not done, as the case suits.  The saying “money is the root of all evil” definitely applies in the human rights and development world.  The King of Corruption is such an accepted familiar figure, he's part of the furniture!


Yet perversely one of the most evil regimes ever to exist – the Khmer Rouge – abolished money, as part of their experiment to revert to some kind of agrarian Utopia.

Today in Cambodia money is well back in fashion; the favourite being the US$, bucket-loads of it preferably in large denomination notes, much originally donated kindly by or on behalf of taxpayers around the world.

That largesse is administered by aid and development organizations and agencies, i.e., governments; international agencies, and non-governmental organizations.  Here in Cambodia, they are lumped together under the simple tag “donors”.

Donors seem to believe that “He who pays the piper, calls the tune!”

They would do well to heed Piper Jamie Allen's story.  He wasn’t so easily seduced by his benefactors?

In the development business we call it “donor conditionality”.  China, apparently as the world's most recent mega-donor on the scene, does not play by the same rules as its contemporaries.  They apply different considerations to “contractual or financial compliance” more akin to a Confucian-notion of simply expecting the favour to be returned in some way later.  “For most Chinese…. the relationship is the goal. The gift is a means to strengthening the relationship.”

Many Cambodians claim Chinese ancestry.  In fact almost all do during Chinese New Year celebrations.  It is not an official holiday but just about everyone takes a week off for it.

So perhaps this sheds some light on why repeatedly Cambodians of all levels, right up to the top, seem unable or unwilling to comply with “donor” rules and conditions. Money, they guess, need not be spent exactly according to the rules.  And as the money keeps coming in regardless, why should they change?

The Cambodian Government is of course noted for its:
“weak implementation of donor conditionalities…..not followed by a reduction in aid flows”.

Its repeated failures to meet agreed targets for reform and benchmarks used to be highlighted, causing "loss of face" each year or so at gatherings with its donor "partners" that is until 2011.  That is when the government decided to cancel the meetings. Strangely not only did donors meekly accede to the arbitrary move but they actually continued to fund unabated, in some case increase aid. It was also around this time that China stepped up its direct aid to Cambodia, overtaking Western donors in scale.

China applies entirely different criteria in return for its foreign aid assistance, not just in Cambodia but with other recipient countries where it is able to count on eventual returns to the gift in a variety of ways, when it wants them, as reciprocal obligations. (See for example what happened when Cambodia chaired ASEAN.)  That may be OK for China, but it has a wide knock-on effect. The comparative share of "Western" aid, or dependence on it, reduces and with it is the influence that goes with it, and effect of potential repercussions from non-compliance.

To illustrate the points, please see this topical case described in a Cambodia Daily article. Although the case is "black and white" as far as international donors and agencies are concerned - certain people have acquired money that they were not entitled to - a typical Cambodia perspective is this, as has often been described to me to justify "commissions":  "Look, once the money has been paid to the supplier, it's his money, so if he chooses to give me some of it, that is fine isn't it?" And that is why the Anti-Corruption Unit sees no wrong.  Often they use the innocent term "tea money" to mask the deed.

So he who pays the piper..... may not hear his own tune, but somebody else's. Ironically that could be a sentiment that Piper Jamie Allen would have endorsed! 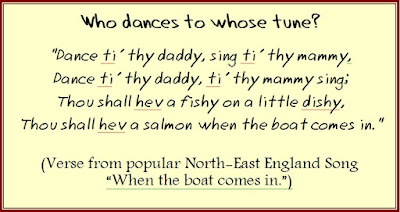 Conclusion and a Postscript 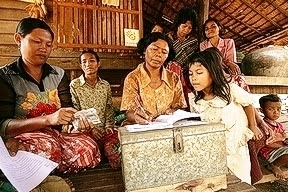 I must stress that my purpose here is not to excuse but to explain why we have consistent non-compliance in development projects.  I still maintain that cultural factors aside, parties to contracts anywhere; who enter in to arrangments freely knowing what is entailed, are honour-bound by them.  If they choose deliberately to break them, for money or benefits that they are not entitled to, then that is breach of trust under Cambodian or any other law.  Any "relationship" regardless of friendly smiles should not be allowed to stand in the way of justice.

Above right: a picture from my article “The Name of the Game is “Sustainability” with the caption derived from the earnest expressions on the faces “It’s the money that matters!”

Please also read about one major donor's reaction to my "awkward" stance against his "laissez-faire"attitude to corruption.


Back in 2005, I gave a presentation in London about doing business in Cambodia. I advised the audience, much to their amusement, to be wary of smiles.  Here is an extract below.  For more on the Cambodian smile, look up this blog.