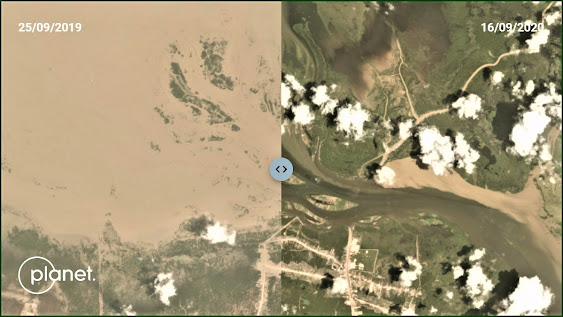 Prior to 2020, the 2019 wet season was one of the driest on record. The annual reversal of the Tonle Sap in Cambodia was severely delayed in 2019 but low rainfall plus upstream dam regulation (mostly from China's 11 mainstream Mekong dams) have totally erased the annual reversal of the Tonle Sap for 2020. This comparative image compares two extremely dry late September images. Remember September 25, 2019 was comparatively very year, so the flooding you see in the 2019 image is at a very low level compared to normal conditions. The September 16, 2020 image shows the Tonle Sap bottleneck at much lower levels - in fact, this is what the Tonle Sap bottleneck looks like for much of the Mekong's dry season which runs from December to May annually. 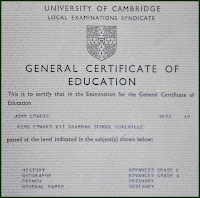 Geography was always my favourite subject at school. I didn't like other subjects so was delighted with my Grade A at “A” level, the university-entrance examinations in the UK. Human and physical geography have remained of great interest and relevance throughout my overseas career.

For one year on St Helena I even taught the subject to high school students. In one small island you have one of the most impressive of planet Earth's creations – a massive volcanic outcrop thrown up in the middle of the vast Atlantic Ocean.  My geographical students there weren't so worldly.  Some thought that milk was a product from a tin can, not produced by cows and farmers.* 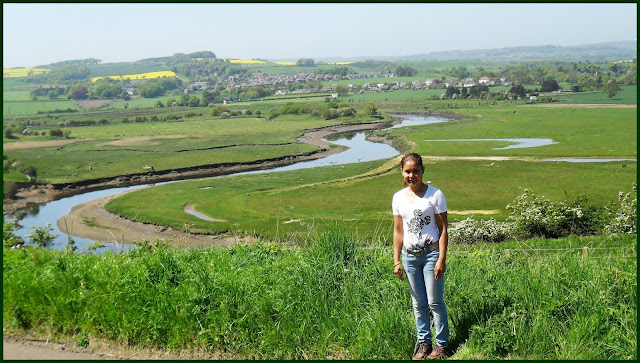 Geography lesson: “Rivers in early, middle, and late life” – as see here the River Aln in old age meandering before it enters the North Sea at Alnmouth Northumberland.

Geography features much more in my Foreign Aid career, in almost every development project. The over-riding aim is to address poverty and hunger, to meet basic human needs. The ghastly Foreign Aid jargon calls it “Food Security”.  You can still hear today a most over-used proverb: “If you give a man a fish, he eats for a day. If you teach a man to fish, he eats for a lifetime.”

Is that common-sense?   A self-evident truth?  You would think so, wouldn't you?  Actually if the words are interpreted literally the logic no longer holds.  They can be opposite to best practice or in need of considerable qualification.

Now I could be talking again about “Don't teach a man to fish, just give him the Goddam fish!“ as Dylan Matthews – a fellow frustrated Foreign Aid worker - put it well, but I'm not.  Mind you what he says, endorsed by equally-suffering Nate Rabe, are always worth re-visiting.

No, this time, I'm talking about one man-made calamity in-the-making over my 20 years in Cambodia. I have personally observed it at close quarters, usually over a beer or two. Not having the creativity of the Stimson Center Team I have borrowed their title for the phenomenon I have witnessed first-hand “A Confluence of Calamities”. The calamities are not just confined to the Mekong confluence with its Tonle Sap and Tonle Bassac tributaries at Phnom Penh.** They extend along its entire length. One of the world's greatest rivers and its most unique natural wonder is being damaged:


The exceptionally-rare natural phenomenon of the Mekong is also at serious risk –– the reversal of the flow of its tributary the Tonle Sap and the massive expansion of its lake of the same name. Indeed this was greatly diminished in the wet season 2019-20. Drought affected growing of the staple product rice. Fish-catches were depleted. The annual bounty of the Mekong - food security and nutrition for millions - has been mercilessly sacrificed. 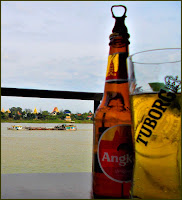 That disaster is not the only one from man's attempts to harness the mighty Mekong. One of the dams under construction collapsed. Torrents of water suddenly cascaded downstream from Laos to Cambodia, with death and destruction in its wake.

I moved to Takhmau in 2000 on the banks of the Tonle Bassac just outside of Phnom Penh. Today you find many restaurants – they come and go with monotonous regularity. There is one that survives, only just, from early days along with newcomers, with fine river views, cooling breezes, and suitable facilities to enjoy a cold beer or two. Some have canned or live music but mostly the only noises came from small motorised boats. Not any more.

All that changed when Phnom Penh's building frenzy began and took off spectacularly. For over a decade, we have sand-pumping rigs and barges operating round-the-clock. Occasionally authorities have banned them. River-banks have collapsed, houses lost.  The bans have never held. The images are photogenic but that is the only good thing to be said.

Over the years I have taken many images of the constant sand-pumping operations.  However my colleague Nick Axelrod must be credited with one of the best. He captured sand being pumped from the confluence to fill in Boueng Kak Lake. This land dispute and terrible effect on local people has featured in many of my writings. 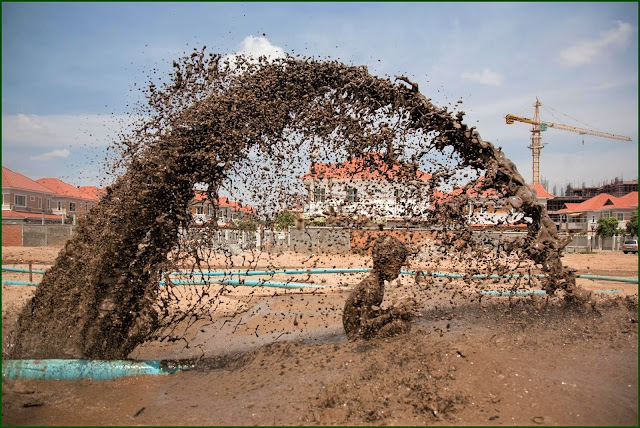 One of my earliest pictures is of Takhmau's oldest sand-pumping operation.  It is just opposite the riverside "sundowner" bar, close to the new Takhmau bridge and 1km from Prime Minister Hun Sen's fortress on his flight-path home.  Although pumping has moved a few hundred metres up-stream, laden barges are still off-loaded nearby on to waiting lorries.  I once counted 8 barges lined-up.  The sand is then taken to cement-works or construction sites.

One operation took place throughout my four-month stay in Takhmau from the end of 2019 into 2020. It was literally straight in front of the "Three Barges Inn" (my name) balcony overlooking the river, giving us all a close-up view of the astonishing speed of filling these massive barges. Click on this link for a short video. A compendium of images can be viewed on my website story: "Mekong: Dam, Sand and Blast: Confluence of Calamities." *    Plug for my Geography teachers, “Yogi” Johnson; Lenny Rainbow and “Killer Kirby”.
**  Greatest calamity at the Phnom Penh confluence on Koh Pich island was a stampede over one of the bridges that caused 347 deaths. We had been there earlier in the day. As with the water Festival I was concerned again about the crowds - millions descend uncontrolled on such venues. 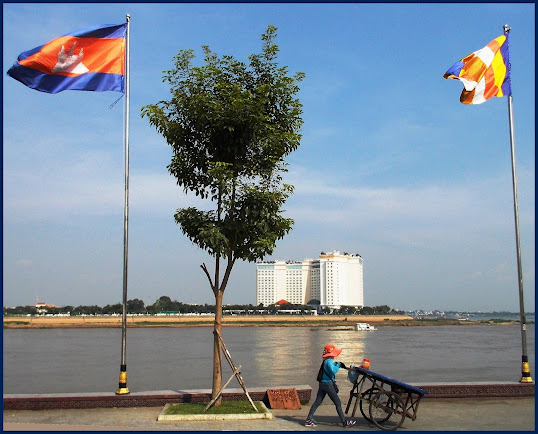 Please go to this 2005 paper from Mak Sithirith:

"Many issues occurred in relation to upstream mentality's projects not necessary unintended, but impacts extend downstream. The case of Yali Dam and its impacts is a clear example of how regional agreement has failed to provide protection to its members from impacts made by another member. Despite the clear case of failure of regional agreement over the Yali dam, the Se San 3, Se San 4 dams are being built on the same river leading to increases international concern about the legitimacy and the accountability of MRC for the Mekong Region. Communities along the Se San continue to suffer from the impacts of these dams. There is inadequate mechanism to address these problems from local, national, regional and bilateral efforts. Local communities bear all the cost and problems while the benefits from these projects go to some where else.

The issues of lack of scientific information about the impacts are continued to be lacked. Downstream countries are always constrained by the lack of evidence to prove the intensity of the impacts, but the mouth of downstream community speaks out that they have impacts. When the information of these impacts is available? Who accountability is this to the people that are affected?"
No debate about the Mekong can take place without China dominating the discourse, both as the largest exploiter of its upper-reaches and its support of major infrastructure projects downstream. This is not just of hydro-power dams but also construction projects built using riversediment sand extracted for concrete and for land-filling.  That debate is not helped by rival "research" bodies and vested interests.
Update August 2022
Now that the rainy season is well-underway, the Mekong is at last rising and the reverse flow of the Tonle Sap is underway.  It is still too early to assess if the eco-system is anything like normal or still affected by dams, sand-mining, etc.  However there is clear evidence of permanent damage as illustrated in this exhibition by Andy Ball. Please also access his Twitter thread.
Also please access the Royal Geographic Society link here, also thanks to Dr Chris Hackney for his Tweet.
Update May 2022
In just the last couple of days, there has been some excellent reporting on the state of the Mekong with concern about its natural sedimentation being disturbed so much that it is having dire effects downstream where rising sea-levels and other factors are coming in to play.  Please see articles no 45 and 46 below.  To go with those is this excellent study by Jana R. Cox et al  on river deltas generally.
They make good reading alongside other worthy titles this year led by Abbie Sieff's discourse on the Tonle Sap Lake, No 34.
There are also some excellent images but I personally still credit Nick Axelrod's above as the most iconic. Roun Ry's images provide vivid documented evidence of the scale of the problem. Note the size of these barges, the amount of sand extracted, when viewed from within the hulls. 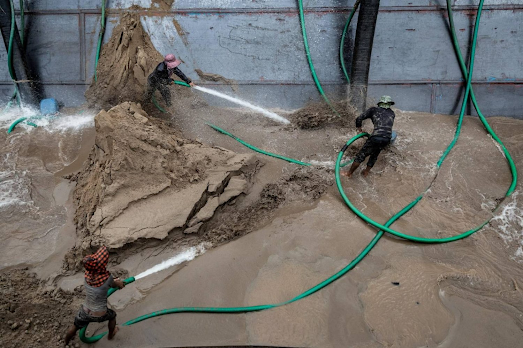 Northumberland is well served by rivers. We have two of the most famous as our boundaries – the Tweed that markers the border with Scotland and the Tyne that marks where the true South starts. Although the Aln was our nearest river, the Coquet is my favourite as it flows through Rothbury and Warkworth on to Amble, three places with obvious other attractions. The River Wansbeck has similar appeal.

The next time I lived near an iconic river it was of course the Thames, with Kingston, Richmond, Twickenham (Eel Pie Island) and Thames Ditton excellent riverside resting-stops with more fine obvious other attractions.

Abroad I've visited some great rivers and waterfalls – Niagara Falls, Victoria Falls and my favourite Howick Falls. Called after our nearby Northumbrian village but they are found in South Africa. The prettiest waterfall must be Heart-Shaped Waterfall on St Helena Island that I managed to reach after cutting through dense undergrowth. How did Maidenhair Fern get there?

My first community development project in Malawi back in 1993-5 was with fishing communities all around Lake Malawi where even then there was a crisis due to over-fishing. It was exacerbated by unnatural environmental hazards such as deadly water hyacinth that was clogging up lake-shore waters, affecting fish-breeding. Our project there, based in Khata Bay, was mainly to teach people not to fish, to find other ways of making a living and to alternative sources of protein. Today in 2020 I see that that work is still going on.
Finally back to Cambodia. Since 2010 the waterfall that has pre-occupied me more than any other has been Bousra in Mondulkiri. This was the preserve of the Bunong ethnic minority but since the opening up of the province, outsiders have taken it over because it is the province's top visitor site. Sadly the area around it, that should be protected indigenous community lands, have also been grabbed and exploited. We are fighting a hopeless battle to save it for indigenous children.

More pictures of the Mekong and its tributaries can be seen on my website story with the same name as this blog. "Mekong: Dam, Sand and Blast: Confluence of Calamities."