So much older then I’m younger than that now

There’s no mistaking Kingston University’s Penrhyn Road building.  Its outward appearance is much as it was in our days of the 1970s.  You see the same main entrance; foyer; refectory, door-ways to corridors and stair-ways that are intact down to the exact same unpolished brass rails.

At first glance the students who criss-cross the foyer could be the same.  Some of the fashions and hair-styles would not be out-of-place.  Look a bit closer, and that’s where comparisons end.  Nostalgia soon gives way to present-day realities.

Today’s students are all younger.  They all have baby-faces. There are many more girls, and a richer diversity of skin-colours.  In our day we were more alike.  We were older too and more mature, weren’t we – all of us not just Knights Park perpetual Architecture students like Stan? Mind you Stan, who revelled in his repeat-years, was positively ancient.  Did he become a rich and famous architect?  Kingston Alumni may oblige.

In Cambodia today, the university students wear uniforms like those at high school. They are just as fresh-faced as those in Kingston, but no way would they dare to rebel openly against uniformity, unlike our generation.  We were far too eager to embrace individuality and adulthood.

We were the first batch of students when Kingston elevated to a new higher education institution in its own right. Politics being what it was (and is), like other colleges around the country we were called a Polytechnic, not a university.  We were to be different, to be pioneers of innovation where academia would be more allied with industry.  You can read about it in my dissertation, if it is still in the library – hard-copy version of course. (No online in those days.)

I didn’t go in search of our old Kingston library. It was in the Tower Block, I recall, with floors not strong enough for all the books. Having visited my old school library in Alnwick last year I wonder if there is one?  Books and shelves have given way to desks and computers.  Students pour over screens.  Text-books; folders; papers, and pens are long gone!

Back in the 70s, we were the post-World War II baby-boomers generation born of the “never again” brave new world of peace exhorted by our heroes like Beatle John Lennon.  “Give Peace a Chance!”

We wanted to put the world to right and thought that we could.  Lengthy earnest conversations took place in what we called the refectory, now stands “The Market Place”, proudly announcing “Welcome to the Global Eating Experience!”  The food in our day was neither global nor delicious. I preferred to nip along to the Magnet Cafe (now no more) for a pie where I was once sat next to Sergeant Stone and Bert Lynch being filmed for famous TV Police show “Z-Cars”.  Tune in these days to Everton FC’s home games at Goodison Park and you’ll still hear its whistling theme tune.

Eating food was not the main objective anyway in those days.  It isn’t for most students today. We all have other things on our mind, usually.  For us, those green or orange plastic bench-seats were there for squeaky bums to pass by many an idle hour before, after and even during lectures for certain folks who couldn’t stir in to action.  You could count on certain characters occupying their favoured spots, woe betide anyone invading them!  Always we were surrounded by a haze of cigarette smoke. Talk was in the air, a loud buzz in contrast to today’s scene of quiet faces peering in to small screens.

All that talk must have defined us as rebels. I suppose we were lucky too, due to being fairly secure in guaranteed income from our local authority maintenance grants, so spared the worries of today’s student loans.  It wasn’t the only thing that made us freer to express ourselves.

We basked in an era of student protests.   We stopped the 70s rugby tour of apartheid South Africa.

“And it’s one two three, what are we fighting for? Don’t ask me, I don’t give a dam.  Next stop is Vietnam!"

We joined Country Joe in protesting against the Vietnam War.  Who would have thought that I would end up spending 20 years of my life in a part of the world still coming to terms with the tragedies of that time?

Closer to home we stood up against “Milk-Snatcher Thatcher” marching down the A3 to Tolworth Tower, then the Education Ministry’s HQ.  Margaret Thatcher was its Secretary of State before she became Prime Minister. Years later I described the incident to Cambodia’s King Sihanouk much to his delight.  He was no fan either of Mrs T who deployed the SAS there.

Are today’s students as rebellious?  They don’t seem to be but then they can easily resort to social media and online advocacy campaigns rather than meeting up in person or at mass gatherings.  Is that why our “Main Hall” is no more, no longer needed for big meetings?  It’s now a big lecture theatre instead.  We had some fun there with one exception – it’s where we sat our final examinations.

Our Kingston was a top venue for rock bands in those days; quite a few of them became even more famous later. Some living nearby had a habit of dropping in on us too.   We saw a lot of adopted local lad Eric Clapton and a fair bit of another ex-student Angie Bowie with or without David.  It was backstage there that I first set eyes on a chap in a frock – Lou Reed of the Velvet Underground.  How times have changed. Today boys can wear skirts to primary school.  We hosted the likes of Rod Stewart; Queen, Focus, Wishbone Ash, etc., all went on to be household names.  We had to move down to the Coronation Hall for Elton John in his Andy Pandy attire. We needed the extra capacity to pay his fee of £650.  I recall too a very homesick Lindisfarne first time away from God’s own and my country (Newcastle), fetching comfort food for them from the New Kam Tong.  It wasn’t the only exotic item to be consumed backstage in those days.

Today’s students sitting in the same spot, as photographed above, will have little inkling of all that.  I was an intruder, an eavesdropper.  I shouldn’t really have been there.  Fortunately nobody cared and thank goodness.  It’s the way university campuses should be; the way it was in our day but denied these days to many students around the world.  We did live through terrorism from the IRA in the 1970s but they didn't attack centres of education. I feel sorry for those at risk of attack at universities around the world, including massacres we see all too often on US campuses.

So thank you Kingston for my interlope, before I retreated to the “Spring Grove”.  It was once my preferred drinking hole to the Student Union bar as well as the “AppleMarket” now O’Neills.  We took a walk along the River; popped in to my bank of 48 years, and on to Wetherspoons then Gatwick for Cambodia. 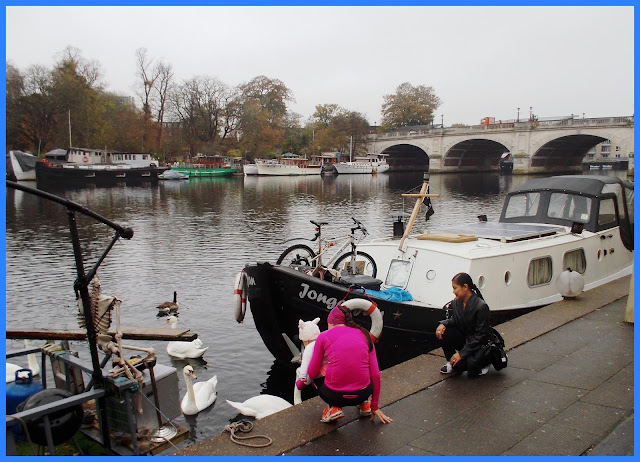 1                The blog title comes from Bob Dylan’s song via and thanks to @themoodiereport where other gems can be found.
2                I have made several return trips to Kingston over the years and to old haunts of Richmond, Twickenham, Strawberry Hill, and Mortlake, etc.  A lot of good things have survived unlike in many other places I have lived.
3                In 1996 I was a VSO Volunteer in Malawi on a UK development aid project.  I went to a meeting in Lilongwe where no less than four of us were all ex-Kingston!  Feeling out-in-the cold, the organiser reckoned that Kingston was taking over the UK’s aid agency, today called DfID  then Overseas Development Administration.  Another Kingston ex followed me to Saint Helena Island in the South Atlantic although she left more of a mark on Montserrat.
4                It would be good to name some of the characters who languished in the old refectory. One can be easily found even today in Ashby-de-la Zouch, not looking so bad for decades of wear and tear. I think I know what happened to the old green bench-seats - see below?
5                The New Kam Tong at the bottom of Eden St must owe its existence to the Kingston patronage.  In 1969 for £1, on a Friday night, we could manage up to 10 pints and end the night with a Beef Chow Mein.  Rather extravagant Eh What?
6                We did have a few scares of IRA bombings and evacuations – one was when I was at the Milk Marketing Board in Thames Ditton for my placement as part of my course.  A couple of years later, down in Devon (scroll down to More Reflections) I came across the best line on such things, thanks to Ken Passmore.
7                Finally I see the area on the corner of Grove Crescent that was once our Student Union is being developed with the unsightly garage now gone too. I graduated from Kingston to get away only as far as Surrey County Council. I had an office in Grove Crescent overlooking the SU entrance where good old Audrey, ever-suffering, ever-obliging Secretary used to give me a wave! 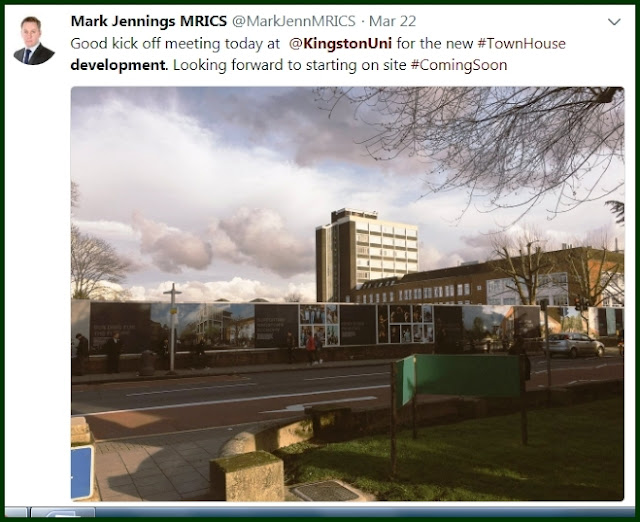 Thanks, Mark. Tower Block is showing well over Penrhyn Road - trust your design will be better! 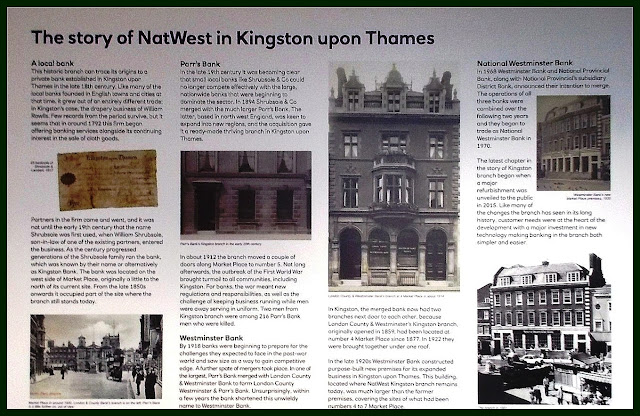 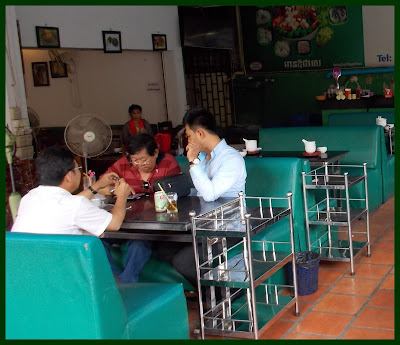