Print and be Dammed or “Haad your Gob?”

Foreword to this blog added September 2017.

Very sadly things in Cambodia have taken a dramatic downturn for the worst in Press and Media Freedom. By far the worst development is the closure of the Cambodia Daily - precipitated by the hostile government - whose journalists have been a vital element in our human rights work for all of my 20 years in Cambodia. Numerous references and extracts appear in this blog. Many stories and eulogies appear, many from the many journalists all around the world whose career started there.  See for example: Richard Paddock. Also last edition after almost 25 years here and visit the Daily's Facebook.  See also CCIM's report on media generally in 2017.

The UK is 36, Cambodia 147, out of 197 countries for Freedom of the Press 2014 according to Freedom House.  We need Foreign Media to help Cambodian Media.


Freedom of expression is a most important human right.  Yet it is still routinely challenged in many countries, whenever criticism upsets powerful people.  I don’t intend to argue against that here.  Instead I want to ask about self-censorship and highly selective writing and editing, especially when editors decide that a story or issue “would not interest our readers!”  I wonder why certain kinds of stories always make it. Often they are ones most lacking informed comment.

You will see from my blogging supporting Cambodian child rights, that we are opposed to sex tourism; orphanage tourism; and things like “gap year” stays that can be harmful and counter-productive.

Apart from occasional worthy articles like in the Guardian last week, how do we get the message through to the Great British* Public?  Cambodian newspapers like the Cambodian Daily, Phnom Penh Post, do a good job. That is despite the risks Freedom House identifies, "withour fear or favor" is relative! They do try to cover such issues more consistently, but by the time their features are read, they are too late to make any difference.  The problem is already here.  Folks from Britain or wherever* have already arrived.  They include too many who are precisely the kind Cambodia does not want.

We need more coverage in the media of countries with more freedom!

* Please substitute your own country’s name where you see this asterisk.


Before I go on, I must explain “Haad your Gob!”  This is or used to be common Northumbrian vernacular. The words are sung in our famous song, “the Lambton Worm”.  “Whisht! Lads, haad yor gobs” or in standard English “Be quiet, boys, shut your mouths!” (“Print and be dammed” is more famous, but I add a link below for those not familiar with its origins.)

If you would like to hear this great song, I can recommend either Stobhillgate First School

or the version by the much more famous Bryan Ferry from the album "From Tees to Tyne: The Northumbria Anthology."

My gob, or the touch-pad for sending digital messages instead, is hard to shut. I keep trying to persuade local media in the UK to take up the case, so far to little avail. If I get a reply, the explanation is that it's not newsworthy, at least not at a preventative stage. That soon changes when a scandal erupts.

There are several types of common “foreign” stories that hit media headlines in the UK*.


·       Bad news like the HIV outbreak in one village, or malaria-resistance as a global threat.
·       Sensational – like Gary Glitter’s arrest.
·       Quirky -  like cows with healing powers; marrying a cow; mystical tattoos, deformed pigs, penis-shaped flowers etc.
·       Victims - of robberies, scams and road accidents, especially where travel insurance is invalidated, and distraught relatives crowd-source with appeals to get them home.
·        Mercy heroes and heroines, although well-intended, many of us in Cambodia would really question whether they are needed, or could do more at a needy location (usually they go for popular expatriate places rather than where care standards are poorer). Sometimes they are taking work that locals can and should do, enabling authorities to shirk responsibilities.

So this is a simple plea to all media in the UK:

Please try to inform your readers and viewers, periodically, and especially when you run travel features, that only responsible and law-abiding visitors should visit countries like Cambodia.  They should stick to tourist sites and attractions.  They should consciously avoid controversy or offending local laws and customs.  If they do want to come for “experience’ or to give something like their time, skills, or money, then please advise them to do their research properly; only arrange something through a trusted and reputable source, and stick to the same standards as apply at home.  Those include Police certified checks and professional qualifications before having any contact with children. Even then follow the simple rules - no unsupervised contact, no contact with a child on his or her own.

Yes, you may think "I'm OK". But the same is said by those who do harm. Children can't tell difference.

If you are thinking of volunteering in Cambodia, please watch this video. Or read Hannah's story here. Also please do that research; do not be swayed by just one easily-arranged good-looking package as produced by the for-profit merchants.

And if you are a teacher in the UK, Australia or any country that has publications like the Times Education Supplement, please try to get them to feature this problem. So far they have never responded to any of my requests. However, no doubt the teaching profession could do much to solve the problem by enlightening students before they travel the world. 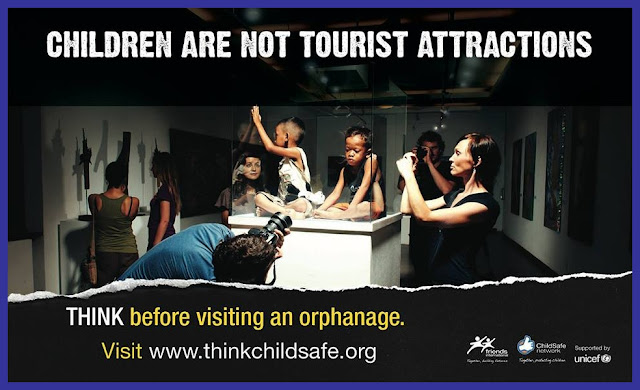 Please click on to related blogs. I love to go a wanderering and Backpacker tourism can be a force for good.

Amid the Covid19 virus pandemic, a poem in our local Alnwick vernacular has come my way. Can't think why anyone would think I would be interested but here goes: A sensational sad story has hit the UK Press as covered in the main local #NorthEast evening newspaper. It reminds me of a famous saying of a former US Ambassador (who I used to meet).  My guess is my letter to that paper will not be printed: 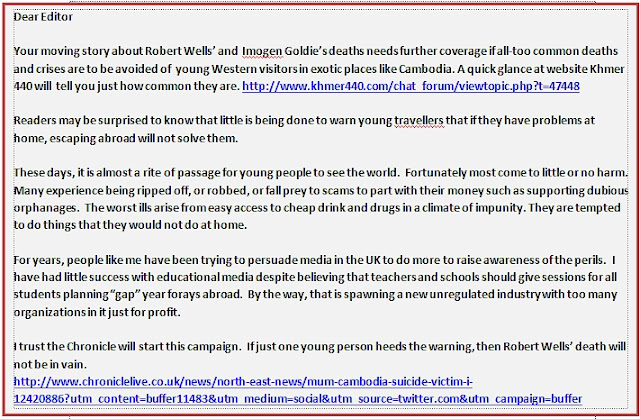 For more about Northumbrian or Geordie speech, and a good laugh, visit: http://www.geordie.org.uk

The Northumberland Gazette has kindly published some items for me. One “The Women’s Institute Hut Halfway Round the World” does not appear to be online any more, so please ask me for a copy.  It tells how remote Cambodian villages are building wooden community centres with an uncanny resemblance to WI ones like Ulgham, pronounced “ Uffham”! Many of these are disappearing, once there many in the 1950s such a my village.  They serve the same purpose of a wide range of social and public activities.

Another the Gazette covered "Cheers from Cambodia", definitely of the quirky variety tell of when my mother presented to her local pub a Cambodian bottle of spirits infused with a snake, said to have Viagra-like powers! It soon disappeared.

Finally, as I lived for four years in Devon, the Express and Echo, covered a story near where I lived.  I supported a school making a responsible exchange trip to Cambodia.  Around the same time I failed to persuade other schools in the UK not to make irresponsible trips to dubious orphanages.  The Times Educational Supplement did not respond to my requests to a feature on this topic nor to schools advising their students wishing to take a gap year to do their research too.  Apart from inappropriate placements abroad, they could find that they are paying far too much. 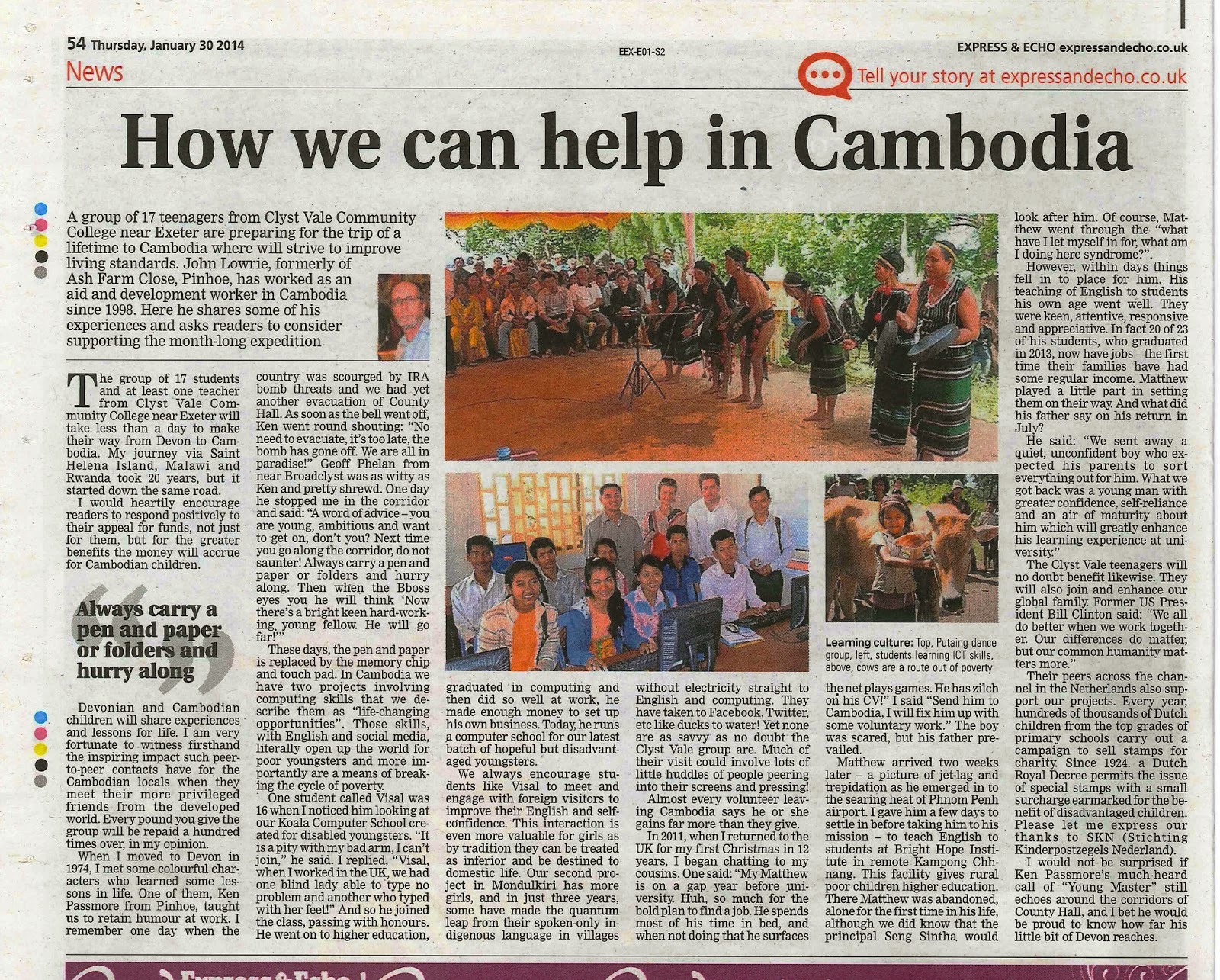 I had lots of fun in Devon and it is where I was able to buy my first house in Pinhoe.  Life at County Hall was interesting if rarely enthralling but I learned a lot.

In 1976 we had very heavy snowfalls.  Being bright and keen and not far from the Emergency Control Centre, we went to offer assistance. It was locked but phones were going off inside. Eventually just one Emergency Control Officer arrived.  He had to break the door down. We staffed the phones for a quite few hours until other staff arrived. Next day in the local paper was a photograph and headline, with the County Engineer in the room on the phone. "Devon's well-oiled emergency plan swings in to action!

The Queen visited us in 1977 as part of her Silver Wedding Anniversary waving to us as we looked out the office window.  She was treated to Devon duck with blackberry sauce.  We think she would have preferred to have had a Cornish pasty with us in the Coaver Club.

It was the era of IRA bombings. We had evacuation drills very often.  We got fed up of them until one day Ken Passmore ran up and down the corridor shouting "Don't worry, don't worry!"Why? "Too late the bomb's gone off, we're all in heaven!" Heaven purgatory in County Hall?