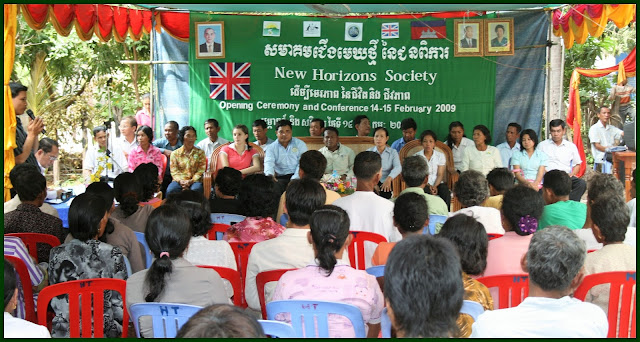 The Kampong Chhnang disabled people at the inaugural AGM of their own NGO in 2009. Their elected Governing Council took the stage ready for new advocacy initiatives as well as livelihood improvement activities.


“Cambodia: Turning the Clock Back”

For the second time in 40 years a Cambodian regime is determined to turn the clock back.

Like the infamous Khmer Rouge regime, present rulers want to revert to a previous simpler existence, even if less extreme than the Utopian dream Pol Pot yearned for.

The ruling CPP party is intent on recapturing its glory days.

Some party comrades want to return to 1991 Pre-Paris Peace Accords single-party rule, with a system of governance and economic model akin to neighbouring Vietnam, Laos, or big backer China.

Although that is an ideal, the current leadership would settle for its best recent electoral performance of 2008.. This way it hopes to retain as much “Western” help as it can, to keep the money rolling in; to prop up public services; to continue exports of goods on favourable terms; and to enrich themselves while consolidating their hegemonic rule.

2008 was by far the best election result for the ruling CPP party. For it and folks in the international community, it legitimized its rule. This had been in doubt because of the “1997 incident” that saw 1993 election winner Prince Ranriddh overthrown. That doubt was not dispelled by the close 1998 election judged by many not to be fully free and fair.

In 2008, CPP took 90 seats in the National Assembly, with 33 for the opposition. That was more than the 2/3 majority needed to change the constitution.  It could rule alone. That is precisely what it intends to restore today.

A closer look at the 2008 result would show it not to be the really “glory days”?  Let's set aside criticisms that the outcome did not truly reflect the will of the people due to unfairness surrounding the conduct of the entire electoral processes. Almost 3.5 million voted for CPP; 58.1% of voters. That meant 41.9% did not vote for CPP, compared with 52.7% in 2003 or 49% in the 2017 commune elections. The most significant factor is that turnout in 2008 was only 74%. Therefore CPP's 58.1 % of the popular vote in 2008 translates in to only 43% of the people eligible to vote.

CPP knows that it is not a natural party of government In Cambodia. That is why it is resorting to unnatural behaviour. It is only prepared to settle for democracy when it works in its favour, and when other things fall in to place, as they used to. That means a return to a compliant population living in fear and ignorance.

In 2003 in Kampong Chhnang I took on a bright mid-20s well-educated development worker. I will call her Theary here.  We had secured good grants from the Princess Diana Memorial Fund; British and Irish Governments for a project to improve the lives and livelihoods of 1,275 poor families living with disability. We recruited some of the best people working in the sector.  Theary was one.

Now I expected that the induction and orientation period for these already accomplished professionals would take just two weeks. However it went on beyond 6 weeks and for Theary that was never enough. The project was to work with poor disabled people; for them to become self-reliant; to make their own way in the world; to cease being dependent on others and objects of pity in “development” processes.

Theary was brought up in a family with CPP commune chiefs. She was educated in a system where knowledge came unquestioningly from top-down like her “Kruu” (Khmer for teacher akin to “Guru”). Rote-learning and a simple rationale of “what my teacher say” prevailed. Such conformity was not just for children but adults, with government officials equally attuned to compliance and loyalty.

For the poor disabled people we worked with all this meant one thing. The best that they could hope for were handouts; they had to be grateful for handouts and beholden to the government and ruling party for them. After all “Everything belongs to the Government, doesn't it!” Theary insisted. She wasn't entirely alone. Some of her new colleagues feared the fancy notion of people indulging in advocacy to claim rights.  It was uncanny. We had devoted over 6 weeks to instil in to well-paid educated staff this notion, yet in less than 6 days, their charges – the poor disabled people – got it! “We're used to being hungry” said one “This is our chance to do something about it!” Another added “We've got nothing to lose!”

These poor people living with disability in Kampong Chhnang were the first in Cambodia to petition the Ministry of Social Affairs about why their meagre pensions were not being paid or subjected to arbitrary deductions. In 2011, they won their casee, not just for themselves but for all pensioners. The Anti-Corruption Unit, to their surprise and to many of us, had found “broad-based malfeasance” in all provinces.

Unfortunately Theary never saw this as a success. Nor did the government officials, even some NGO workers. They had something to lose from the old order undergoing change.

The Prime Minister received a similar message in 2013-14, after the shock close election result, when he implored colleagues to “scrub themselves” and to embark on reform.

Astute as ever, he soon realized that to take on his friends was much harder (and more dangerous) than his enemies, and so he set about “detecting, disrupting, and destroying” all forms of opposition, whether party political, or neutral civil society, anywhere where absolute loyalty could not be assured.

Hun Sen had changed tack again. The scrubbing brush was put away.

It will encounter one enormous change since then. There are today very few 20-year-olds like the Theary of 2003. Today's young people no longer learn just from parents and teachers. Parents and teachers no longer meekly follow leads from their superiors.  Social media and the internet have opened up new worlds.

Pol Pot's attempt to turn the clock back to an old world order failed; it failed with dire consequences.  Surely the same mistake is not to be made again?

The "New Horizons" local NGO finally came to a premature end in 2015, despite its success. It peaked at 135 community self-help groups and 3,159 members led by their elected Governing Council. Their greatest triumph was for the Cambodian Government to accept officials were robbing them of their meagre pension benefits. With the benefit of hindsight, we can now see that such a dynamic well-organised mass movement was too great a threat to the established order in Cambodia. People challenging officialdom through collective effort, calling for accountability, was still too new.  However, what was newer and more of a threat was that these poor disabled people challenged NGO officials to hold them to account too and that did not go down well.  So neither government nor NGO officials wanted them to succeed and moved to close their NGO. The people took their case all the way up to Deputy Prime Minister Sar Kheng and the Public Accounts Committee of the UK's House of Commons, but in the end, no-one would give them a hearing.  They struggled on - still supported by faithful donors - doing good work until their final NGO official had the last word.  He simply abandoned the NGO like a previous leadership "Marie Celeste" style. Instead he took over one of the NGO's most successful social enterprises or a leading role with it as a private venture.

Yes, a lot of good work was done; a lot of lives were transformed, but we will never know how many more could have followed.  However, taking just one: Seng Kosal ("Most inspiring client") given how far he has come from a terrible start in life, it was all worthwhile.  He also serves as one enduring lesson.  Now while some of my former "facilitator" colleagues are still in regular paid work, others have fallen by the wayside. For all their education, training and incomes high by Cambodia standards, not one of them went on to organize his or her own NGO. That too is a lesson in "sustainability" of #foreignaid.
Posted by ANorthumbrianAbroad