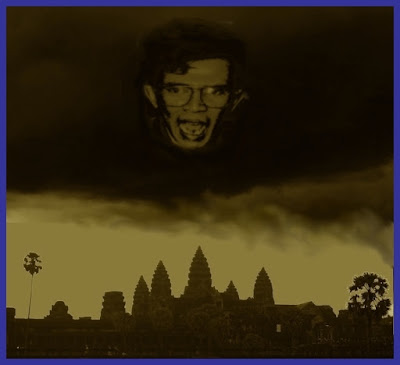 The Thor of Cambodia politics has gathered his forces ready for the next battle.

This blog was first released in 2016 well before the 2017 Commune Elections, based on how I saw things beginning to go as the ruling party's "Carrot and Stick" policies to sway support away from the Opposition CNRP party were not working. Their internal polls must have shown this, hence the beginning of moves that would guarantee continued power one way or another. The dropping of the tacit policy adopted since 1998 of the neutrality of armed forced and of civil servants was a clear sign.  Sadly too few in the international community saw such signs or heeded warnings from people like me. It was clear from 2014 on that there was to be an all-out assault on all forms of "opposition", i.e. any group that was not overtly loyal to the ruling party,   Therefore political opponents, NGOs, trade unions and media were all under sustained attack, the brutal assassination of their most articulate advocate Kem Ley, the most atrocious example. Social media such as our Blogs; Facebook and Twitter accounts document Cambodia's descent away from democracy.

Thor, of course, is the hammer-wielding god of thunder, lightning, and storms in Norse mythology.  Is a Greek-style tragedy about to unfold?

So far few commentators have been able to explain why so much effort has been made to ensure that the ruling party holds on to power.  The assumption is that those are grounds enough.

There is in fact much more to it.

Some of the organs of state created to ensure a permanent stranglehold on power could transform to being - for the first time in Cambodia's contemporary history - effective checks on it.

It begins with this year’s commune elections. Then rapidly it will proceed to the National Elections in 2018.

You have to remember that the last elections in 2012 were contested by a divided opposition.  Despite winning seats from the ruling party, their division ensured that CPP took 97.5% of the Commune Chiefdoms with their 61.67% of the vote. That was 1,592 Commune Chiefs in all and 8,292 Councillors, compared with the combined Sam Rainsy (SRP) and Human Rights (HRP) parties' 40 Chiefs and 2,955 Councillors. That is a ratio or power imbalance of 74:26.

In the 2013 general election the combined SRP and HRP parties campaigning as the single party CNRP took officially 44.46% of the popular vote, to the CPP’s 48.83%.  We do not need to delve in to the debate as to whether this genuinely represented the people’s will, all things being unequal.

It is therefore almost inevitable that CPP will lose seats and a significant share of their 61.67% vote in 2012.

This will mean many more opposition Commune Chiefs and Councillors in power locally during and up to the national elections next year.

Even if CPP retains power nationally, there will be one more consequential effect of the loss of local seats.  Commune Councillors make up the largest share of the constituencies that elect the second chamber, the Senate, and the provincial authorities throughout the country.

The Senate does have some powers.  The Senate President fills in as acting Head of State in the King’s absence.  It was of course created, like many things in Cambodia, as a political accommodation, not just with the then main Opposition, FUNCINPEC headed by Prince Ranariddh, but also within CPP to give an honourable role to CPP President Chea Sim.

Won’t it be ironic if Cambodia ends up with the lower chamber in charge of the CPP and the Senate under CNRP?  Or vice-versa?

The dark clouds, the storm clouds are indeed gathering over Cambodia.  All the elements are being harnessed by the ruling party to avoid a fate it finds unimaginable.

Unless the Party cancels the elections or the NEC proves to be far less competent than it has proven to be since formation in 1997, democracy may well win in the end.

The shame is blood is bound to be shed, again, as it has done in every election that has gone before.

A colour revolution is not needed in Cambodia.  Its blood-red stains are revolting enough!

The local elections proceeded quite well in terms of no bloodshed but still fell well short of the "free, fair and credible" certification.  ( I drafted two blogs, one before and one after, comparing Cambodia's election experience with that of the UK.)

I am surprised to see that some international observers such as the incoming French Ambassador seem to take a different view from technical experts.  It is very clear that the ruling CPP party, despite its slender victory, regards the margin between it and Opposition CNRP as far too close for comfort.  Therefore it has embarked upon even more suppression.  First it has curtailed civil society observers from functioning as election monitors.  Secondly, it has passed more restrictive laws clearly intended to remove charismatic Opposition leader Sam Rainsy from the scene.

The dark clouds are still gathering.  The air is still poisoned by the inexplicable assassination of our friend and colleague, Kem Ley, sadly just the latest of prominent figures to practice essential freedoms. It is more likely than not that there will be another one.

For previous relevant comment, click here.  As well citing Sue Downie's excellent paper above, there is also my take on the 1998 election in a paper concerned with the [supposed] neutrality of state forces, a factor overtly absent in 2017. As the Future Forum paper and these demonstrate, there are many common factors still at-play.

I am grateful for the request for clarification regarding my “blood-red” comment. Yes, it does apply to what happened during the Khmer Rouge period.  However, it applies since, far too often, with lives taken for what can only be politically-motivated reasons. Please see Kate Bartlett's 2012 article in the Cambodia Daily. The Paris Peace Accords of 1991 were supposed to end such killings. They haven’t - as assassinations like Chut Wutty in 2012 and Kem Ley in 2016 show. Los Angeles has its Walk of Fame. Phnom Penh has its Walk of Shame.  Let’s go.  My personal first sight of  bloodshed in Cambodia was on St 51 in September 1998 when “Democracy Square” was flattened. I saw images on CNN; recognized the scene outside, 20 yards from my apartment, near Wat Langka. Two monks, saffron robes blood-stained, lay on the road injured or dead. That  same spot was to host the killing of Chea Vichea, well-known Trade Union leader, in 2004. Take a short walk up past Independence Monument to St 9 and Kabko Market, and we come to where Om Radsady, a widely-respected Opposition leader was summarily murdered in 2003.  Not far away to the South on Monivong Boulevard, popular social commentator and political analyst Kem Ley was killed on 10 July 2016. Further from the city centre two other trade union leaders, Ros Sovannarith and Hy Vuthy were also summarily gunned-down. 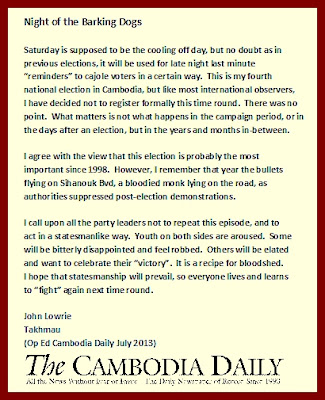 Of course the last major bloodshed on Phnom Penh’s streets occurred in 1997 when the post-UNTAC coalition government came to a violent end. For a vivid account, read “Harrowing Tales” by Nate Thayer here (scroll down to find it). That of course was preceded just a few weeks before with the equally-harrowing 1997 grenade attack on a Sam Rainsy rally.  I must also mention the state-sanctioned killings of demonstrators and by-standers in Veng Sreng St in January 2014. And there have been too many other killings, under dubious circumstances, some unreported.

It is therefore little wonder that Phnom Penh has consistently voted against the ruling party, and this is probably why its inhabitants are deprived of their entitlement to fair representation for electoral purposes.


Although election monitor COMFREL reported no directly linked deaths during the 2013 election, there were deaths in the post-election demonstration periods.  One man was killed near Monivong Bridge.  The killings at Veng Sreng St, though due to an industrial dispute, were related in that various protests merged, with protestors [uncharacteristically] tolerated in Phnom Penh until as in previous years, they were violently suppressed. A whole year was to pass before the new National Assembly convened. 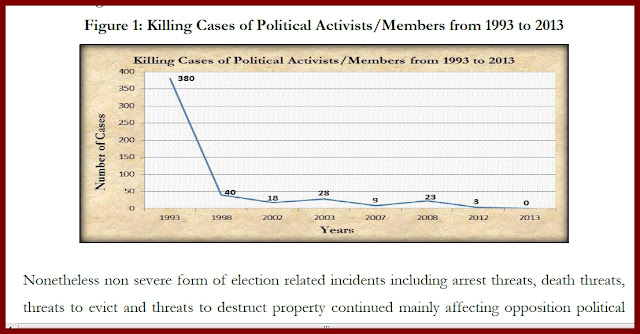 I wrote this blog before we heard that Sam Rainsy resigned as President as CNRP.  Clearly both he and Hun Sen have made the same calculations as me, and this adds logic to his move few others are explaining.  I wonder though if many of his supporters will understand it.? Much will depend on how Kem Sokha and Mu Sochua who are effective real grassroots campaigners are able to function, if at all.  (Please see Phnom Penh Post.)


"We want the election. We want changes through the election. But they want to dissolve our party, and if it is dissolved, our party cannot compete and the election is meaningless. Then we lose a historical opportunity to bring the changes that Cambodian people want.”
Posted by ANorthumbrianAbroad