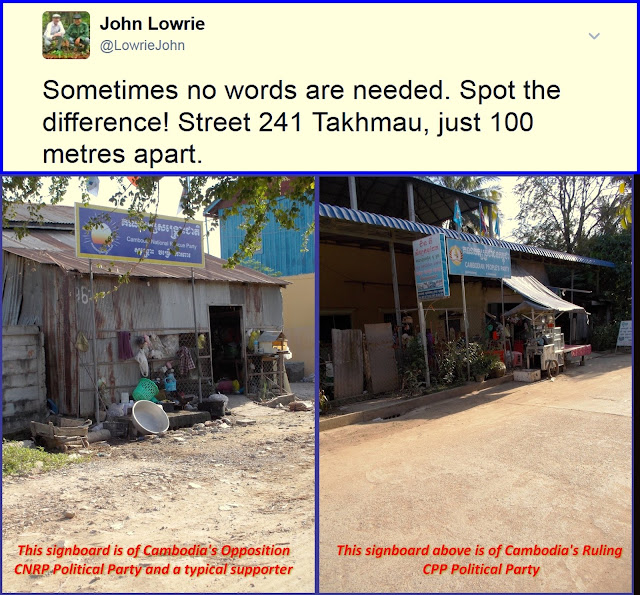 Voters who do not turn out at elections often reason “It won’t make any difference, which party to vote for or not at all*”. This is not the case in Cambodia where the ruling party’s strategy makes it clear where benefits will go to, or be forfeited by the way a vote is cast. This picture shows the quality of a publicly-funded road
A key test of a healthy democracy? Read on.

Foreword to this blog December 2017

Firstly you will no longer see Opposition CNRP signs anywhere. They were removed once the Cambodia Supreme Court announced the dissolution of the party.  It is very clear that holding on to power matters more than anything else, yet some kind of election again as in 1998, is still wanted by the ruling party (for international legitimacy) and by many in the international community too- intricately entwined with it (to maintain business-as-usual). That is bound to mean even more manipulation of electoral processes, and even more skewed interpretation of standards to determine if elections are free, fair and credible. The criteria set out in this blog is the basis of how such judgments should be made.

This blog is really a technical assessment to illustrate how elections are determined to be free, fair and credible by international standards.  Repeatedly some commentators cast such judgments on the basis of what they see on polling day, when of course any manipulation or deviation from systems of integrity take place months and years before.

This blog is a companion to an earlier one "Part One" and part of a series in the build-up to the July 2018 elections. My most ominous one "Dark clouds gathering", is the one that predicted what was to happen after the close result in 2014, in my view when PM Hun Sen concluded that his party could no longer be sure of winning elections. "Astute as ever, he soon realized that to take on his friends was much harder (and more dangerous) than his enemies, and so he set about “detecting, disrupting, and destroying” all forms of opposition, whether party political, or neutral civil society, anywhere where absolute loyalty could not be assured."  (Quote from this blog.)

I have regularly posted observations on my twitter account, reminding followers of some essential factors such as the requirement for security services and public officials to be neutral, factors we gave careful attention to in 1998 that are no longer given even tacit respect.

Predicting elections is for the foolhardy as Opinion Pollsters are learning.  I can’t claim to be any better.  Like most people, I did not foresee the UK election shock result with the governing Conservative Party losing its majority. Nor did most of us foresee the 2013 Cambodian election where the Opposition CNRP Party almost wrestled power.


So maybe I should hold back on commenting?  But then, there is much to be said [that sadly many Cambodians daren’t say] and important lessons learned in the quest for free and fair elections.

Democracies everywhere like Cambodia have much to learn from the UK. The most important lesson is to accept the people’s verdict, and to hand over or share power if need be.

Basically in both Cambodia and the UK, the respective ruling parties “won” but with narrow leads in both cases.  In neither case were narrow wins expected: Cambodia because of aforethought and design; the UK by simple virtue of conventional wisdom now discredited.

In Cambodia the result (until official figures on 25 June) are 85.7% turnout, with 51% to the ruling CPP party and 46% to the main Opposition CNRP.  The UK turnout was 68.7% with the ruling Conservatives taking 42.4% and main Opposition Labour Party 40%.

So as postulated in Part 1 (below) both ruling parties came out on top - no surprise in Cambodia but a shock in the UK where the Conservatives were expected to romp home with a large majority. Actually they lost their working majority in the UK Parliament and need support of another party to govern.

Despite Cambodia’s greater fervour, is there any doubt which of the two, UK or Cambodia, is the healthier democracy?

My analysis suggests that it is the UK with it retaining my Gold Medal award, but with perhaps not quite a full gleaming shine.

Cambodia is still far from healthy, not a lot better – worse in some respects – than my first election in 1998. I have witnessed every one since.  The 2017 election falls short of a Bronze model, although it could yet attain that by the time everything settles down. For now though it is still in the plastic age or stage!

My assessment and award will change significantly if real power in all 482 ( or so) communes won by the CNRP is amicably handed over by CPP and/or if in most of the 1,646 newly-elected Commune Councils we see a return to the original idea (and the Law) for them of sharing power locally, working collectively as a Council, and not as single all-powerful chiefdoms. I suspect that both CPP and CNRP parties will stick to the “winner-takes-all” mentality.

If the earlier precedents apply in Cambodia of when CPP shared power with another party FUNCINPEC (from 1993 to 2003) , in reality it will be CPP officials who will retain real power even if they are nominally junior in the leaderships to officials of other parties.

Fear: For fear; lack of fear or disregard of fear, i.e., not being intimidated by pre-election warnings of dire consequences of not voting for “stability” and the ruling party, both the Cambodian and UK electorates deserve great credit.

Voters in the UK are safe in the knowledge that they will not be punished for disloyalty. Indeed, it is the “swing voters”, ones who change allegiances, that win or lose every election in the UK.

In Cambodia punishment is likely, as the example pictured at the top of this blog illustrates, and to be expected if the ruling party keeps to its pre-election threats.  This election’s brave disloyal 46% will probably find not only do they miss out on development, but in everyday essential tasks at their Commune Hall like obtaining identity cards and updated family books. They will find them harder to obtain and to cost more one way or another.

In two important aspects, Cambodia is doing much better in these elections than before but will they last for the national elections next year and beyond?

The question CPP is yet to face up to is “Can CPP win an election truly fairly?”  If 46% voted against it this time despite the intimidating environment, it doesn’t take much to show where true majority loyalties rest.

The “Free, Fair and Credible” accolade and one of my democracy medals will not be earned by Cambodia until the NEC is reformed in both structure and in process. Its leadership should be genuinely independent, not the current bi-partisan compromise, and its secretariat – now part of the main civil service and therefore CPP-orientated – must be taken back to be directly-employed by the NEC itself so that no-one is beholden to government and any political party.  These moves would do much to correct fundamental weaknesses in process, i.e. in decision-making. To correct those, NEC ought to apply strictly the principles of natural justice that I once taught in good governance training to top officials.

The ultimate test of fair elections is not only the peaceful handover of power to the winners but equally that the losers accept the result in good faith[1].

As it happens the Asian Network for Free Elections (ANFREL), a genuine objective monitor of elections, has since reached similar conclusions.  Sadly, the Cambodian ruling party is seeking to undermine such professionalism by actively supporting and participating in a new rival election monitor, ICAPP that simply put lacks credibility.

So Cambodia and the ruling CPP party, you know what you must do to win a medal in the 2018 national elections. Roll on 2018!


* "It won’t make any difference, which party to vote for or not at all”
(Caption from photograph above)
Well one more vote would have made an enormous difference in Blyth, Northumberland - please see Footnote 1 below for details and an example of democracy at its best and its most intriguing.

Please note that in this blog I have chosen not to comment about the basic systems of democracy and conducting elections in either country although there are strong arguments for reform in both the UK and Cambodia.  Both employ the same system of “first past the post” in each constituency rather than the proportional one based on the share of the overall vote accorded to each party.  In the UK that is because of the tradition of citizens identifying with their local MPs personally once they are in office, so that they do act as their representatives with regular meetings in constituencies and taking up issues for citizens. Losing candidates and parties are free to continue to campaign, to promote themselves as the alternatives next time round. UK MPs can and do break ranks from their party as Labour Leader Jeremy Corbyn best exemplifies.  In Cambodia, so far, these are limited at best, inconceivable on most matters, or just denied outright.  The ruling party in Cambodia refused to allow the CNRP to appoint a shadow cabinet.

Similarly in practice in Cambodia, the executive acts “Presidentially” rather than collectively through a Cabinet or Council of Ministers. One Prime Minister has just learned that this is not a good idea. The other should take note.

This was my blog written before both Cambodian and UK elections - please read to compare "Before and After" It would be good to have a French election comparison. 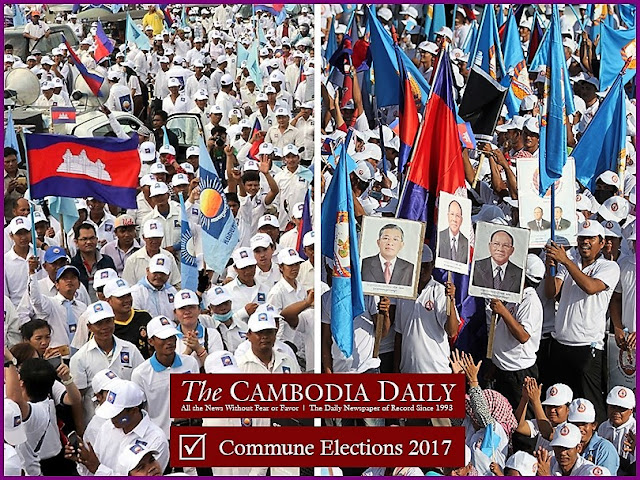 [1] The best example of winners and losers accepting results and the “referee’s” decision was in my home county of Northumberland in Blyth where the counts equal in local elections, the seat was won on a toss of a coin.  Now not only did that mean one party lost a seat but it also lost its potential majority rule of the authority. Smallest majority in the national election was just 2, accepted without rancour as in Cambodia.
[2] Cambodia’s political scene is often punctuated by assault, litigation and assassinations of political and civil society opponents. In the last election build-up, prominent commentator and analyst Kem Ley was killed.
[3] See for example my blog and links regarding the repeated “exclusion” of Opposition Leader Sam Rainsy from active local politics,a tactic employed by the ruling party also with former Opponent Prince Ranariddh.
[4] Officials at commune level conducting registration have considerable discretion to enter and deny registration to electors. Also the ruling party refuses to countenance absentee voting, unlike other countries even within ASEAN, so workers working away from home (garment workers, university students, etc) and all Cambodians abroad are disenfranchised. Needless to say these groups tend to be opposition supporters.
Posted by ANorthumbrianAbroad