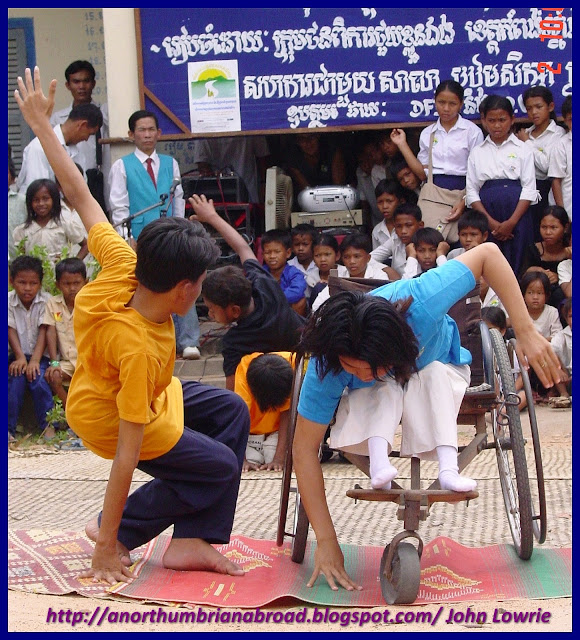 Article for St Helena Independent - to be published.

Thea surprised us all.  For a start she was a girl [1].  She was neither the oldest nor the brightest. She was one of the more disabled in our troupe of mixed-ability children.  She had been reluctant to join.  She was shy.  Yet there was no mistaking it.  Thea (short for Sokunthea) had emerged as their leader.  All the children were poor [2].  That’s why they were with us.  They just wanted to be like “normal” children [3] able to learn Computing and English, a small element in our project for mainly poor and disabled people with two main components. One was to improve livelihoods. The other “was to do something about their low status”.


Adults and children alike wanted to learn about “advocacy” how to argue for improvements. They were keen to learn new skills but first they had to learn to work together.  “Self-help group-working” is an effective way of cultivating change. [4]  First of all you must either build the group or do as I argue, let the group build itself.  The strange thing about human behaviour is whenever people gather together over time group cohesion and leadership develop naturally.  Quite often, as in Thea’s case, the best leaders are not the ones you would expect.

Thea’s “Child Advocacy Group” operated from 2003, regularly for 6 years, and for one final reunion in 2011 by which time they were quite grown-up.  At their peak, they presented issues at international and national conferences and appeared on national TV. [5]  That was their high-profile work but what mattered more was their low-profile work.  Children know other children best. So back in their villages they rooted out other poor children living with disability or some other pronounced disadvantage. These child advocates, peer-to-peer teachers, excelled . They had fun too with our simple"Live-safe, Eat-safe, Drink-safe" community health education sessions, for example in just passing on how to wash hands properly.  It was a great way to reach those most risk of neglect, abuse and exploitation.  If not for their success many lives would have remained miserable; some short-lived.  In Cambodia “the shame of having a “different” child also leads families to segregate themselves from their community, or neglect their child out of frustration.”

Readers on Saint Helena will be amused by the name our disability group called itself “New Horizons Society” and by what they sang at a notable national conference “As the Saints Go Marching –On”.  This was based on the flooding disaster in New Orleans USA after Hurricane Katrina. Ironically the adults didn’t heed their warning. The province was widely-flooded and damaged the next year.

The same self-help group methodology featured in my design of other human rights and development projects, not just for Cambodia but Laos and Vietnam. In all cases it was to compensate for deficient local public services, even ones complicit in abuse or corruption with scant care for their poorest most vulnerable citizens.  For example, “Child Protection Groups and Networks” are developed within my partner local human rights NGO “LICADHO” that address key issues. They include worst forms of child labour in for example brick works or domestic servitude, and trafficking in to the sex industry.

Agencies like “Save-the-Children” and "UNICEF" have excellent materials. The Child Rights poster in child-friendly words is reproduced below.

It is this knowledge and experience that Saint Helena should have and had when child abuse issues first emerged if not before.  Quite frankly to believe you can import experts for instant solutions is ludicrous.  The danger now with the airport is that it is easier to fly them in.
Allegations of child abuse are notoriously difficult to deal with.  Indeed we now know for certain that in the past issues have been neglected; covered-up; children not believed if they have overcome threats to keep quiet, and perpetrators left to pursue their evil ways.  We know another thing.  The majority of child abuse is carried out by people known to the child, even close family-members, and people with power and authority over them.

Probably the fullest exposure of failed child protection mechanisms has been seen with the Australian Child Abuse Royal Commission. Its public hearings have been more revealing, more insightful, and far more painful than those in the UK of the Jimmy Savile or Rotherham cases.

Strangely the Savile case raises a personal anecdote, with the benefit of hindsight an insightful one. Back in 1971 when living in London, a group of us were invited to “Top of the Pops” the BBC’s weekly show. One of our friends from Halifax refused to go. “Not with that weirdo Jimmy Savile!” The fact is even then his bizarre behaviour was known to children but it remained unexpressed.

I certainly believe that failed “Western” models of child-care would do well to be open to learning from other countries and cultures, and St Helena should have a choice instead of simply taking whatever DfID offers.  DfID seldom looks beyond the UK and sometimes not as thoroughly as it should within the UK for the most appropriate “experts”. This was reported by the Public Accounts Enquiry on the St Helena Airport debacle.   Had this been done a lot of grief might have been avoided. If this is done in future a lot more grief will be avoided.

For now Saint Helena has adopted the UK’s “Safe-Guarding” model of inter-agency working, relying largely on external experts.  I do not know to what extent they have adopted “child-centered” working in the same way that Basil George as Education Officer promoted it for teaching on the Island. The two approaches can be compatible.  Once children-only and/or adult-linked self-help groups are formed, on their own or within other community groups, then the right linkages need to be made for concerns to be expressed, in due confidence, and to be investigated competently.  The correct balance has to be struck between being absolutely sure to find out what is happening to a child against an innocent adult being accused of paedophlia, as has happened to Cliff Richard and Thai Cave-Rescue Diver Vernon Unsworth**.

When I was on St Helena I was amazed by the encyclopaedic knowledge teachers had of their students and their families.  However even then children held secrets but as Thea and her friends can tell you, the best people to winkle out concerns are other children, not experts.

The danger and daftness of too many experts.

Saint Helena features in many of my blogs. The most popular one is “More to St Helenian Culture than Napoleon” followed by "The Buck Stops Here!*" My favourite is “The Fish and ChipMillionaire”.  For others just enter “Helena” in the search box.
*Only 2 ahead of "Saints - Heed your Pope!" 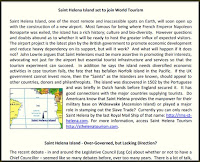 A paper in August 2014 I wrote about Saint Helena was auspicious in that it was prophetic about the airport project.  Its original purpose was to encourage St Helenians to take more of lead as the island entered the world tourism stage.  However, as a development practitioner, I was concerned that the strategy was not ambitious enough to bring about the economic benefit envisaged; there was no contingency plan, and too much reliance was vested in foreign interests, rather than Saints at home and abroad. This paper was included in the House of Commons Public Accounts Committee investigation. It can be obtained from Academia or one of my websites here.

1             In Cambodia girls and women are still not expected to lead. In fact the ancient Women’s Code “Chbab Srey” remains a strong influence despite modern efforts to promote gender equality.

2             Family poverty assessments were conducted as very often people pretend to be poorer than they are to obtain benefits.  I called in to this project a year after I left. Instead of the rows of bicycles some students used to have, most needed to walk or use our project vehicle, there were motor-cycles, evidence of malpractice having crept in. The project vehicle has become the personal property of the Director again not untypical of what happens in the absence of supervision and ethical commitments.

3             There is a persistent belief in Cambodia that misfortune in any form is due punishment for sins, this life or a past one. This is something I mention often in blogs and also stated in the article from which I took the quotation for this piece here.

4             Self-help group working is proven to work in both development and human rights fields but is still not standard practice.  One reason is that it requires time commitments of both beneficiaries and the community facilitators and very often donors (and authorities) want quicker results. It does take adequate ”core cost” funding and many donors are reluctant to give that, preferring to see direct benefits for their money. There is also one intrinsic problem.  If organisations and community facilitators do a good job, and the self-help groups do well, they do themselves out of a job. Many are not so masochistic.  More on these themes can be read in Blogs 1; 2, and 3.
As well as time you need to give incentives for the self-help group to form and to stay together.  Some organisations give money. I don’t as it means you they join for the wrong reason.  With children it is easy as there are always things that they enjoy – like learning, singing, dancing, and making and eating food. our troupe was invited to perform away from home, so for them it was their experience in a hotel, by the sea-side and to visit Cambodia’s top attractions like Angkor Wat.  Incentives can be very modest.  Our health education programme included washing hands properly.  We gave each child just a plastic bowl and bar of soap to go out and teach other children how and when to wash hands.  They loved it.

We were very fortunate that good friends Katie Goad of EpicArts and Chris Minko of CNVLD taught our disabled members how to dance and play sports as well as and often better than non-disabled friends.

5             The NHS website – latest news and other sections, tell the full stories and gives details of the characters.  As Sokunthea phased out – she was appointed as CNVLD’s Mistress of Ceremonies, all shyness gone – Kosal took on the leadership role.  I list him as my most inspiring client.  Please drop in to his Facebook page – toady he runs his own NGO doing what we first did with him.  His English is quite good.  You can use Google Translate to see what he is saying.

6             The PAC enquiry was very important not just because of what went wrong with the airport but the reflections on the way DfID and the UK Government with its appointees deal with Saint Helena.  The Wass report also commented on the management by the Governor and other expatriate appointments. In the case of both the airport project and when the child abuse issue arose I made formal offers (not taken up) that might have saved a lot of grief.  My paper about the airport can be accessed here, almost predicting the debacle, and was read by PAC members. I only sent emails about the child abuse case to the principals involved, but later wrote up my observations in this blog. 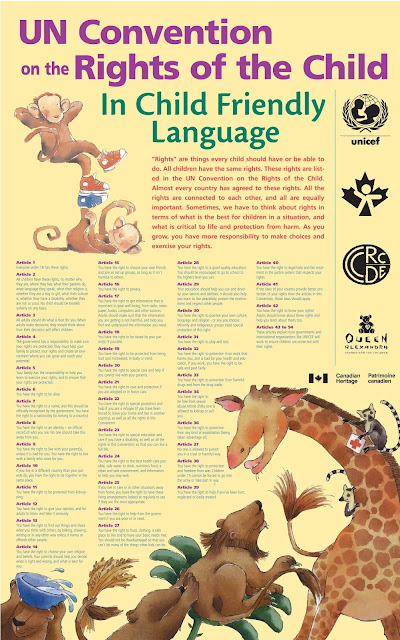