The Baden-Powells would never have approved, but for the best part of four years I was an honorary girl guide.  It led in 2000 to the undoubted highlight of all my years in Cambodia with an invitation to dine with King Sihanouk and Queen Monineath.

The Girl Guides in Cambodia were revived by Mrs Meng Ho Leang.  She was also the Deputy Director of our human rights organization. Sadly history may not do her justice, with some of her achievements largely forgotten such as the pioneering of teaching of human rights in schools.  As my colleague, Aine Doody, an Irish volunteer used to remark she was a formidable lady.  “Why is it?” Aine would ask “Can I not go in to meet Mrs Meng Ho without coming out crying?”  She was not alone in that regard.

I recall in my early days there, before I knew better, when I was “invited” (i.e. summoned) to one of Mrs Meng Ho’s morale-boosting staff social outings.  After the first two pagodas visited (two more than to my usual liking), with a third about to begin, I wandered off to quench my thirst.  “Don’t, don’t go!” pleaded my quivering male colleagues. “She won’t like it!”  But off I went.  It did not take long to find a suitable hostelry. I had just finished my first cold beer, when the outing's three buses all pulled up outside.  In rushed the boys…. “You’re in trouble, we’re in trouble for letting you go!” As I climbed the steps on to the bus, Mrs Meng Ho perched on her front seat, a grimace on her face pointed towards the other captive faces, all fearing the worst, simply said “This lot were too frightened to tell me where you went, but I knew where to find you!” 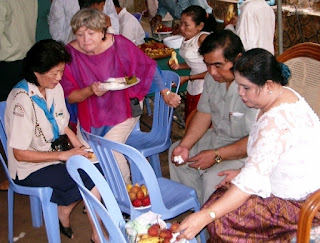 Mrs Meng Ho is definitely a lady with her heart in the right place.  True, she has a bit of a bark but never a bite.  And nowhere does she show her softer side more than with the Girl Guides.  She and her troupe came to visit my later project with disabled children in 2003.


Mrs Meng Ho Leang, in her Girl Guide President's uniform chatting to Australian volunteer, Mrs Frances Digges*, and the Kampong Chhnang Provincial Governor Touch Marim  and his wife over lunch prepared by her Girl Guides (as a fundraiser):


Every year, Queen Monineath, as Patron of the Girl Guides, invited them for their annual gathering to the Royal Palace in Phnom Penh.  I was just about the only male invited for my part in raising funds. (You might be surprised this most British of institutions got its best grant from Japanese ladies.)  One year, just as the Queen started to give her speech, the sun faded and the heavens opened with a horrendous tropical downpour.  The Queen valiantly stuck to her task, she was partly sheltered, but all the girls were initially out in the open.  The Palace staff were obviously equipped to deal with such eventualities.  Out came pink plastic sheets.  The girls were soon all-covered as the Queen addressed a field of pink without a face showing.  By the end of her speech a 15 cms depth of storm-water lay all-around. “Never mind” consoled President Meng Ho, closing the event “Rain is a sign of good luck!”

The following year, I was invited to meet both the King and Queen at the Royal Palace, necessitating a major investment of US$120 in a posh tailored suit.  Now as a young boy, I remembered the Vietnam War and even of a Prince Sihanouk leading his fighting forces.  So here I was about to meet him, and this after I had acquired the habit of using my favourite quote from him: "In today's Cambodia, the God of Impunity reigns side by side with the King of Corruption."  For a second quote, and sign of his mercurial character, follow this link.)

Now I was expecting to be in quite a crowd of guests, and a perfunctory chat with His Majesty.  King Sihanouk had other ideas. He grabbed and held my hand as we talked for what seemed ages.  I could not help noticing a few people queuing up not-so patiently.  The King was utterly charming as we talked about Saint Helena and Napoleon; Rwanda and the genocide; and on our mutual dislike of British Prime Minister Margaret Thatcher [link to video, transcript here) - also please see John Pilger's account.  The King was much amused as he had never heard the “milk-snatcher” story.  I remember his charisma and the softest skin I had ever felt on a man’s hands. His picture appears in one more blog here.

I was never to meet him again, although I was a fellow tutor on one occasion with his son, former Prime Minister, Prince Ranarridh.

And I almost had another brush with Royalty in 2009, thanks to the Girl Guides in London.  By chance, I had a meeting with a Cambodian donor, next to the WAGGGS office, just round the corner from Buckingham Palace, residence of the British monarch.  Afterwards I headed for the nearest pub, by good luck a Young's one, with this poster and a caption with words to the effect of “It’s the staff, we just can’t get them anymore!”

* Fran and her husband Jon Digges (behind her) were recruited as Australian Business Volunteers and did excellent work not just in relation to their formal business and enterprise roles but also to the "life and soul" of our project. Fran encouraged disabled children like Kosal and Jon conducted original work to promote natural compost instead of chemical fertilisers. 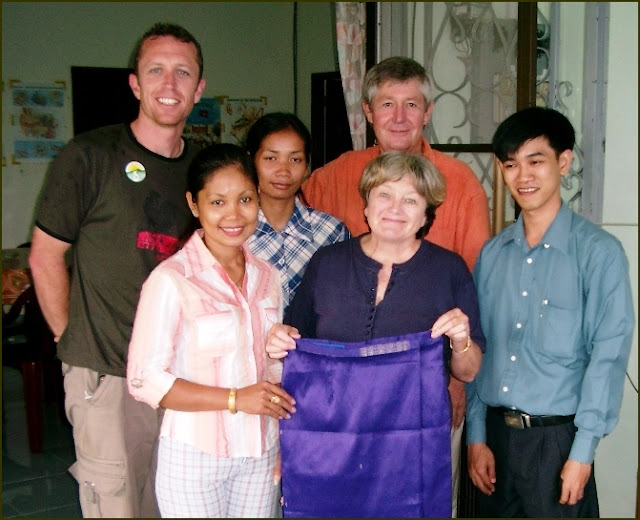 1          Mrs Meng Ho Leang left the human rights organisation in 2000 and for various reasons, one of which was no doubt the loss of her close oversight, it and her flagship human rights teaching programme ended within two years.  Please visit the first and second site-links here for more information. I gained my honorary guide status for helping her to fund-raise, hence her indulgence towards me exercising my freedom of movement - Article 13 of the Universal Declaration of Human Rights.

2          King Sihanouk’s dislike of Margaret Thatcher is based on her support for the Khmer Rouge regime when five of his children died. http://www.globalresearch.ca/how-thatcher-helped-pol-pot/5330873

3          The "Barmaid" is for those unaware, the late Queen Mother, mother of  the UK's Queen Elisabeth II. She was known to have enjoyed a tipple!
Posted by ANorthumbrianAbroad