Out-of-Town but not the Talk-of-the-Town

Takhmau lies just 11 kilometres to the South of Phnom Penh.  It is the provincial capital of Kandal and still has a provincial feel to it even though it is developing rapidly.  Takhmau has become a favourite play-ground, with a great variety of entertainments and eating/drinking venues. My earlier blog tells the history and ups-and-downs of many of them.

Last week I wrote about one of our newer restaurants. It still features below.

Today I am featuring our latest "Ice Box" restaurant bar, made from containers. 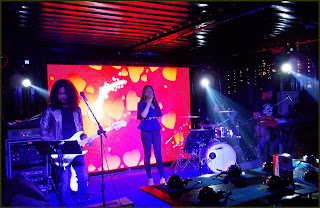 If business picks up, more will be stacked on top. If Cambodia's garment industry contracts, as expected, there will be plenty more containers available too.  Anyway it is always good to see bright keen new enterprising folks, one of whom I am told is extremely popular with young ladies.  In my older blog I have referred to the fact that this one small road in Takhmau used to boast 5 beer gardens.  They all folded but now we have two new-style youngster-friendly places. The next one along the street "Nest" is cute too - pictured below right and posted in a previous tweet. 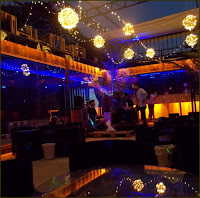 This blog is a shorter update after I had a chat with the latest enterprising restaurant owner trying something different.  First a little background.

Takhmau’s most illustrious resident and our local National Assembly member is the least most likely person you will encounter in town.  You will see his helicopter most days when he stays here.  We usually know if he’s not staying here, when he’s away at one of his other palatial abodes, as that is when we get our share of electricity outages.  Prime Minister Hun Sen does put in the occasional appearance on the ground, such as to vote at elections and the annual boat races on the Tonle Bassac. So far we have never seen him in any of our places of entertainment. His absence is probably a relief to all concerned. 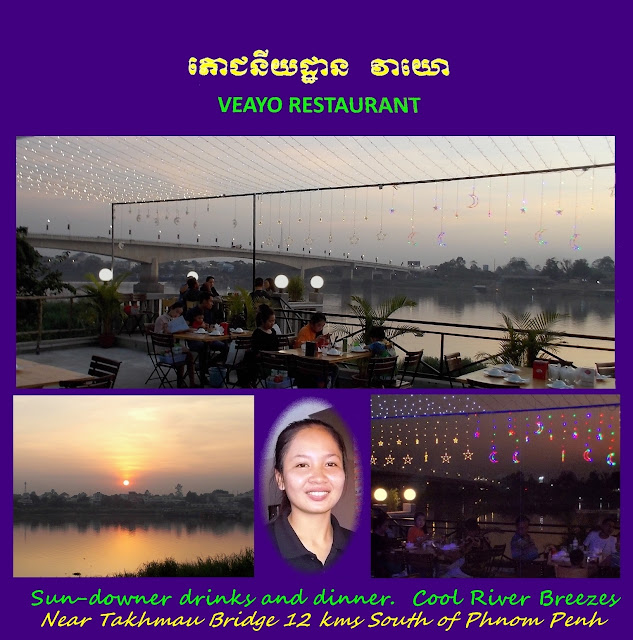 Very close to his fortress, just where his helicopter turns right and descends on his way home is our latest new restaurant “Veayo”.  Its lights twinkle in the evening after the sun goes down. Unusually it is on the other side of Takhmau’s bridge over the Tonle Bassac river that carries the city’s perimeter road.  The restaurant is very easy to reach.  Just hop on the No 2 bus, pay 1,500 riels, and enjoy the air-conditioned atmosphere and local culture as you make your way through the traffic and fumes.  You can’t go wrong.  The bus terminates right beside the bridge.  Just yards away you climb the steps up to the bridge and pedestrian pavement. Then proceed across the Tonle Bassac river with views upstream all the way to Phnom Penh and its new sky-scrapers.  Then descend the steps at the other side, turn left towards Phnom Penh and 200 metres away on your left is Veayo Restaurant with its big new Tiger Beer sign.

I was amused by my chat with the owner.  He’s carried out a survey of his first customers.  Half are families who go out to eat. The other half consists of groups of men, often in familiar male company with or without less familiar female company.  “Naughty boys!”  In essence the survey findings admirably sum up Takhmau’s entertainment scene.  Don’t worry though it’s easy to see which are which.  The naughty boy places always have lots of girls already there.  They’re ready to greet customers and will for a moment take a quick break from peering in to their smart-phones.  Others girls will appear from nowhere as soon as there are enough customers.

Please be kind to all of them, especially the young waitresses.  Very few want this work. It’s their only choice or their last resort. Most girls come far away to earn money for their families. Once in Takhmau they should be safe to retain their anonymity and the guise of in a “respectable” occupation as far as folks back home are concerned. Personally I find what they do is perfectly respectable. There’s no such thing as a lonely drinker in Cambodia.  I’ve seen so many of them come and go over the years.  All are happy to be photographed as long as you show them their image, even better give them a print-copy.  Tips are gratefully-accepted. 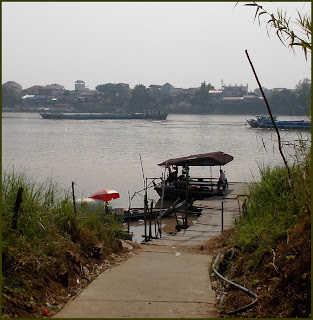 Now you could take a more adventurous trip and do what I do.  The British habit of pub-crawls is hard to break. You could start off from or end up at Veayo, which for the record, at the moment is not a naughty boy place, although it does provide some VIP rooms to keep the boys happy.

I am still a big fan of the old ferries that still ply their craft across the Tonle Sap from near Takhmau’s riverside playground.  That is abuzz with folks in the evening.  It is just a shame that the play area was reduced by half to build the Chinese monstrosity.  There you find Starbucks, one of the few businesses to move in. The twin towers were never built, thank goodness.  The old ferry costs 500 riels each way.  The boatman are characters and so are the few customers that use it – school-children, old ladies, monks and me!  The Mekong for now has been greatly depleted by dams upstream, so the water-level is low, so please be prepared for the steep climb up the river-bank.  It’s the only exertion needed. 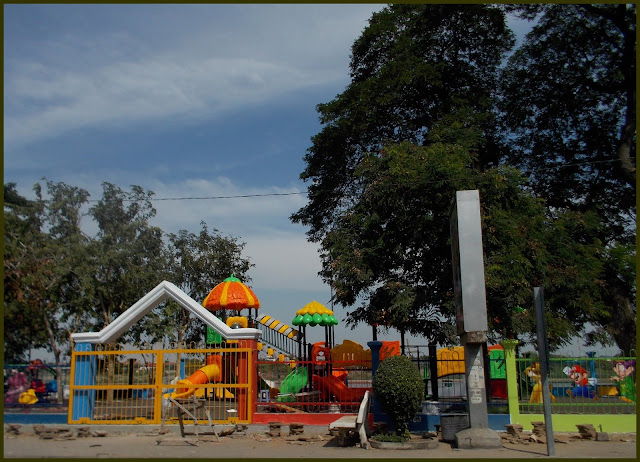 You can then take the straight road up all the way to Yeayo.  There are few shops where you can stop for a cold drink, and there’s plenty to see along the road, including the opposite river-bank.

The Takhmau side is usually my preferred route back where there are some good family and naughty boy restaurants dotted along the way to the riverside playground.  The naughtiest naughty boy places, KTVs, are on the next two adjacent roads.  There also family KTV places - they say so for customers to know.  We have 6 or 7 places with “live” bands, all easily found or heard an easy walk away.  They do have open areas that are family-friendly.  The music consists of the familiar Khmer tunes with as many as 20 female singers and hostesses.  We also have the coffee bars as described in my blog. 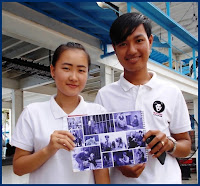 The nearest restaurant on the Takhmau riverside walk near the ferry is Chaplin’s – yes, Charlie Chaplin, and it is a family-favourite place.  It even has model cars that children go in to please their parents.

Now anywhere along that road from the bus terminal is a bus stop.  Just stick your hand out.  It is the route back to Phnom Penh along the riverside playground. Drivers will happily stop for you.  Just please remember the bus service ends around 7.30, despite claims to operate until 8.30pm.  A tuk-tuk back to Phnom Penh is about $5 and there are many all times of the day or night. Usually they will find you. if not they converge around Ta Khmau - black Grand-Father roundabout not far inland from the riverside playground.

"School-children, old ladies.... who use the old Ferry. 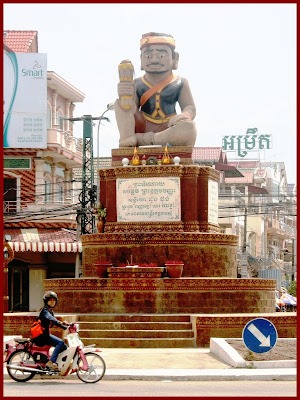 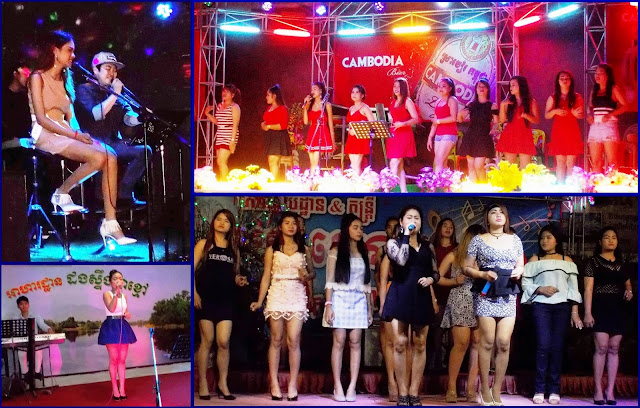 Hostesses from a "Naughty Boy" KTV - please see my Tweet about them. 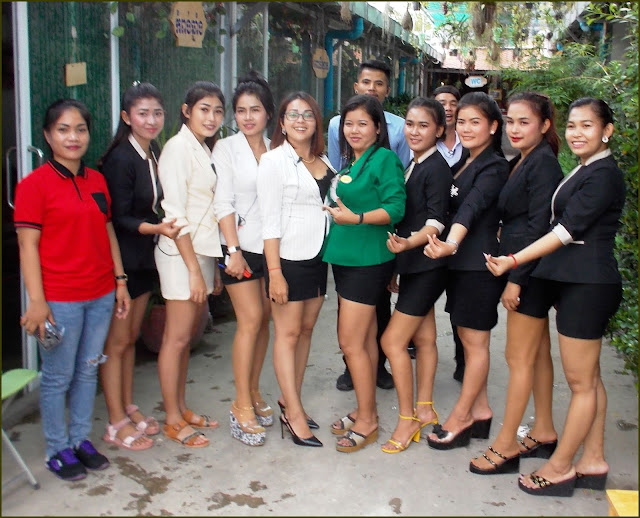