Are we all like Salmon?  Does nature dictate that we should end our days where we were born?  The truth is most of use have a yearning to do so.  But then there are exceptions and none more so in “pioneering” countries like Cambodia, where the cause of humanity has been challenged in ways that few of us would have expected.

Casey Nelson “Barang in the land of Khmers” is the latest exception to the rule.

Ken Cramer, his real name, and known for Canby Publications, suffered an untimely death (walking the plank) in his adopted home, Cambodia, far from his birth.  Probably he wouldn’t want it any other way, as those of us who enjoyed his musings would testify. The fact is he gave an insight – honest, affectionate at times acerbic - as justified – that reflected life Cambodia.  The shame is few foreign diplomatic missions  ever tapped the wealth of knowledge such as his, and that is why one after another of them, in succession, have failed miserably in whatever are their missions…. to advance the interests of their own country, or Cambodians, especially ordinary Cambodians.

As Casey departed hence this world, we had the latest turnaround of Cambodia’s long time ruler Hun Sen with the sudden pardon to much hated foe Kem Sokha.  Casey would not have been surprised by this latest twist of fate given his longevity here.

Hun Sen, like the humble salmon, wants to leave his presence and mark on this earth.  Clearly he is already thinking about his legacy; legitimacy and loi [1] – the means by which his family will enjoy life in later years and when he has finally once gone. He wants to die with a smile on his face.

Legacy? Assured - but mixed? Legitimacy? Must be in serious doubt given his manipulation of law and order and election processes? Loi? Yes, a vast family wealth but can they hold on to it once he is gone?  The chances are he will be as disappointed as others of his ilk – just like Suharto; Marcos and Maputo and many others.  He could yet avoid that fate, but he won’t, unless he recognizes and tackles the marked inequity that his rule has created as well as his distortion of governance and rule of law that has fallen well short of the promise of the Paris Peace Accords of 1991 (that he signed up to!).  He has made Cambodia a country an example of one of the worst and most expensive of international interventions (to assist a troubled country), instead of the role model it once promised.

Strangely, in some ways, Hun Sen,who is undoubtedly one of the most paranoiac leaders ever, and recent avid convert to social media, may miss Nelson as much as us. But he, for one, won’t admit to it. The rest of us will.

* Denwick Bridge, Northumberland - the salmon leap on the River Aln is there to help salmon navigate upstream to their birth-place, after a lifetime in the ocean, to spawn and die.

12 December - there is an interesting discussion here about river boat safety. Will anything be done? Or will more have to die in vain? A few years ago, security forces closed the main road to Takhmau, causing people to take the road along the opposite bank of the Tonle Bassac river, then catching a ferry.  I watched people with motor-cycles crowd aboard one, to the point where it capsized and they all slid off in to the river.  No human casualties thankfully.  However "health and safety" is still a mystery in a country where fate is regarded as inevitable!  And just punishment for past sins! Beware!

One otherwise quiet day we were enjoying Sundowners from an upstairs balcony overlooking the Tonle Sap river in Phnom Penh where the passenger boats dock. Passengers were "walking the plank" to get ashore. A young lady lost her footing and plunged in to the river.

Our esteemed friend, from our country noted for its chivalry, without a thought, ever the gallant gentleman and hero, dashed downstairs, threaded his way through the traffic, and over to jump in the water (all 18 inches of it) to rescue the damsel in distress. He gathered her up in to his arms and put her down once safely on dry land. He then brought her to the bar to clean her up and dry out.  His catch was a most magnificent specimen of Cambodian ladyboy who was most bemused. 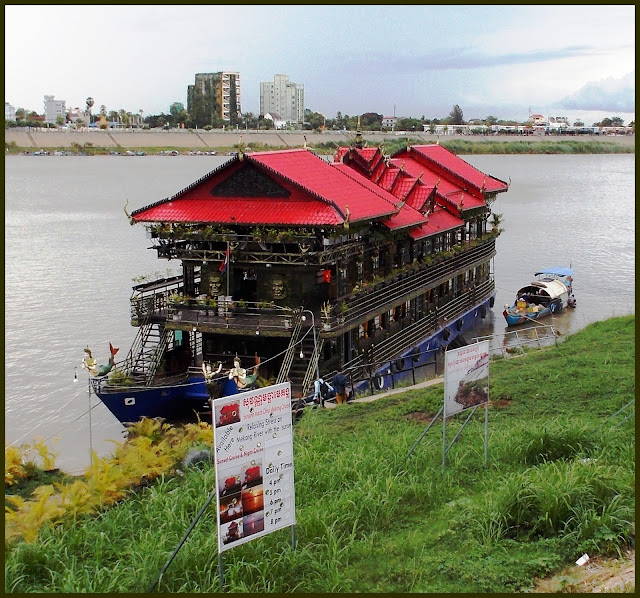 A Most Unlikely Pairing

Back in 2011 I arranged for four Cranfield University MBA students to come to Cambodia for their practical assignments. They were an incredibly diverse foursome. One was about as archetypal British as you can get, the other four from worlds-apart. I have to say that they were great, worked hard, reached put to the clients - budding entrepreneurs - helping them to think strategically and to produce business-plans, still a novelty in Cambodia.

One of the four was a Nigerian lady with a special wish.  At the social event they kindly hosted to conclude their visit, they indicated that  for their last evening in Phnom Penh they wanted to see the social life. So we hopped on to a Tuk-tTuk and headed for riverside. The lady said that in her culture there was nu such things as a "ladyboy". She wanted to meet one. I explained to her that they should not be hard to find. No sooner said than when stopped at traffic-lights (that in itself is quite rare), who pulled up alongside - two ladyboys on a moto.  A quick conversation took place and the two followed us to our destination. None of our four worldly post-graduate high-flyers had twigged that they were ladyboys, and of course it was not for me to enlighten them, was it?  Of course I couldn't let it go on for long, After all all the " boys" seem seem to bit it off but the girl was neglected. Once that was put right she got on famously, transcending language, culture and all kinds of social barriers. 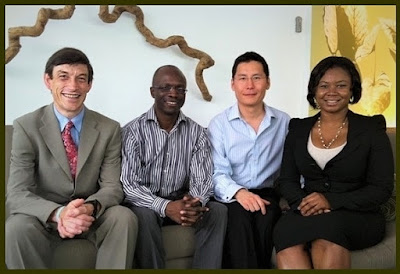 [1] Loi –Khmer for money and wealth.
Posted by ANorthumbrianAbroad