By chance I came across a kindred spirit today.  Someone like me, or thinks like me.  She’s called her blog “A Geordie Abroadie”, and has followed my path to the Far East, only she hasn’t got as far me, but on her way, hanging out in Norwich, East Anglia.  But that is still far enough away to miss the finest points of home.

I am glad to see that nostalgia is not the sole preserve of older folks, Anyway she got me thinking about what I miss, or missed after following the advice many years ago of the Animals “We gotta get out of this place….”

Blue stars! The welcoming site of the pub signs, often glowing above any gloom.  Blue stars like the red roads were the most obvious sign of arriving back ‘yem.  Then shortly afterwards, we would cross one of the bridges over the Tyne, or as I was want to "in them days"  to traversing a few of them when it was easy to do so. (Am I biased in thinking that Newcastle’s riverside panorama with all its bridges so close together is one of the best in the world, immortalized in The Nice’s Five Bridges Suite?) 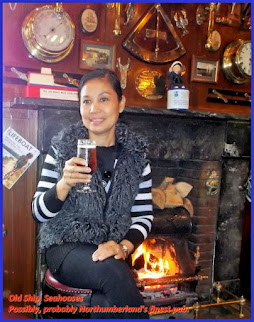 Now I am not a fan of the mega-industrial breweries, but will always have a soft spot for Newcastle Ales, because the Blue Star lit up outside the pubs meant home.  So we have lost that, and fancy having the temerity to brew Newcastle Brown Ale "doon sooth?  (Gone the same way as "Federation"Ales, once the greatest threat to the brewers, actually started in Alnwick but ended up in Gateshead.)

Although not as common in the North East as the Blue Star, was the Red Triangle of Bass, but another acceptable welcoming site.  The Bird and Bush in Alnwick, long gone but still living in cyber-space, used to serve a decent drop.

Imagine my surprise when in the year 2000 or so “Bass in Bottle” started to appear in Cambodia, and by the way at a fraction of the cost of it in the UK, despite travelling halfway around the world.  Conspirators reckoned it was a Chinese Brew and another case of “borrowed” intellectual property rights?

Bass never caught on in Cambodia.  If they had done a little market research they would have realized why not.  The first Beer Promotion girl (pictured above with permission) soon alerted me to the problem.  She giggled and couldn’t stop giggling with every bottle ordered.  It was not that she was delighted with her commission on the sales - but my perfect pronunciation of “Bass” without too much of the “ss” - meant I was asking for….. in the Khmer language…. “Erect Penis!” 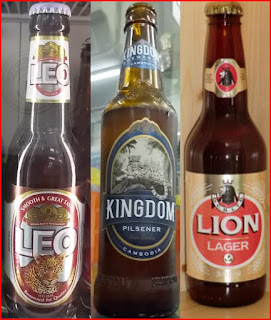 Now in Cambodia where it is very hot and refrigeration expensive, it is not sacrilegious to add cubes of ice to your beer to cool it down. In best and polite Khmer you ask for "Som de kock".  Ice in the Khmer language sounds exactly like “Cock”. So you can see why Bass never caught on.  “Leo” Beer from Thailand has done much better; it’s more decent.  Leo means “underwear”.


◄ Leo is a Lion, King of Jungle, King of Beers!  Leopard?

How to make a [Newcastle] Exhibition of yourself? There again, doesn’t that go with the territory?

PS If anyone has a good picture of a pub with the blue star lit up, please let me have?

Guess what?  Our Blue Star seems to be reincarnated - delightfully - halfway across the world in Phnom Penh.  Happy to settle for Cambodia and Angkor Beer when served at C Star Bar like this: 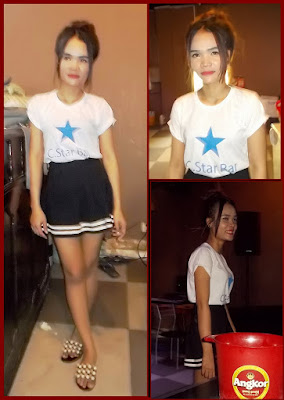 After another excellent lunchtime visit to my favourite hostelry for Courage Director's and Lamb Curry Jacket Potato, I decided to snap their Bass memorabilia: I love that clock! 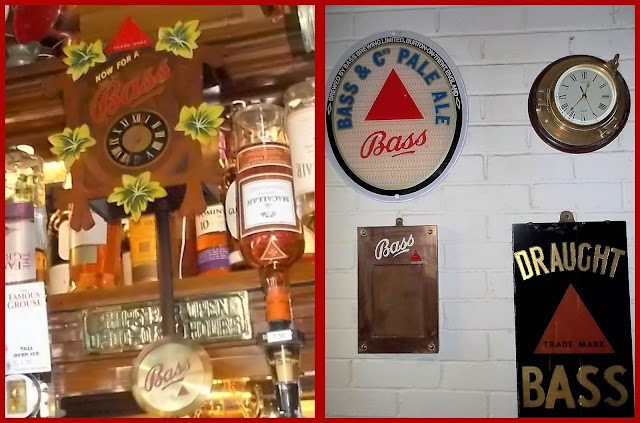 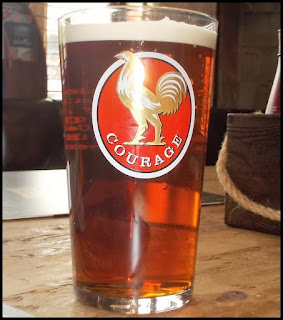 I was exiled on St Helena Island in the South Atlantic Ocean for many years, a self-imposed latterday Napoleon, where unfortunately the beer is only the stuff produced in the chemical factories of South African Breweries. (Drinkable but only just!)  In those days the RMS St Helena plied from Avonmouth so I used to get my Bristol mate (married to a Tristan girl) to dispatch a few bottles of Courage Directors to me. I made the mistake of taking a few bottles in the Standard for the locals to have a taste of decent beer, not because Landlord Barry Dillon was angry it would harm his sales, but because the bottles took him and his regulars down memory lane. They'd all worked on Ascension Island when the RAF used to ship out "Cock-Fowl" beer.

Next to Northumberland, in terms of years-lived-there, comes Dorset in the UK, both now overtaken by Takhmau, Cambodia.

Those connections came together bizarrely in some Twitter postings, where by coincidence, my two counties share distinctions in Earthworks - like Dorset's Maiden Castle, and the more famous Cerne Abbas Giant, who I think my Northumberland compatriots are now offering our "Lady of the North" as belated partner? If you are aroused by the subject - read more here about "Wooden Willies". 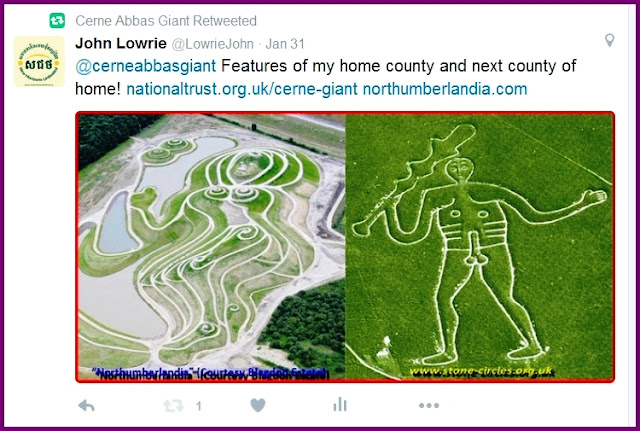