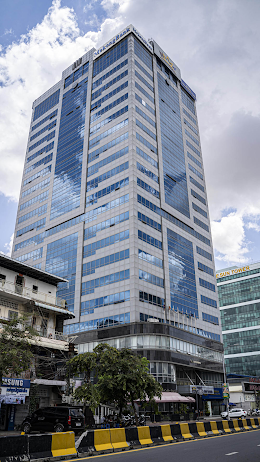 This blog is a sequel to one about:
the saga of dealing with the UK Home Office and its "brimful of brilliant people."

The British Embassy and Ambassador uses the title “UK in Cambodia” for its social media.  I wonder though if there’s much more Cambodianess going in to Britishness than the other way round?  I often muse about this whenever I see the remarkable efforts and sacrifices made to drum-up trade compared to what at one time would have been our once top British values – democracy, good governance, and human rights. I suppose “When in Rome do as the Romans do” is being applied along with “See no evil, hear no evil, speak no evil”.

So after the wife’s and my foray in to the Prince’s cubby-hole yesterday I asked her what she thought about the service.  “It was OK. They were quite nice!”

True the service was exactly what Cambodians expect and accept.  Back in 2005 I presented a paper in London where I talked about this.

Extracts from London paper that brought out many laughs.

It helps to explain why Cambodia still does not do well in international rankings for “ability to do business”. The World Bank rates it 144th in the world.

Yet some people do very well in business in Cambodia. One of the most successful is the Prince, whose name keeps cropping-up a lot of late, for instance as the owner of the business that Cambodia’s Prime Minister used to provide luxury watches to international guests at the recent ASEAN conference. I don’t know if the UK’s top visitor, Greg Hands, was given one and has declared it, or declined it.  The owner of Prince is now a naturalised Cambodian with the honorific tile “Okhna”. He is indeed a colourful character if also accused of dubious dealings.

What I do know is you have to go to one of his many vast properties if you want a UK entry visa.

I don’t know if his rents are too high but the company seems to have settled on what can only be described as a cubby-hole.  At least the reception area most certainly is – no more than 3 or 4 metres by one and a half. In that space you have the customer, the security guard and three staff behind their desk, all wearing masks (to their credit, as we did.)  If there is a queue, the waiting area is the adjacent foyer housing the doors out of and in to the four lifts.  Fortunately Cambodia has very low rates of Covid right now, but despite that this accommodation falls far short of minimum standards to prevent Covid transmission.

Once the wife and I cleared the security check, no problems there, the first words were “Your Appointment Letter”.  No problem.

“Your checklist”? Big problem. I’d only brought the two pages in that listed the 5 documents documents we needed to provide and already uploaded.

Now I have checked. The VFS Global notification said: bring... “a printout of your checklist from GOV.UK”. It did not say as the staff told me “All 9 pages”.  But, I explained all the other pages were blank. “Not the ninth one where you have to sign!”

So I also checked the original acknowledgement and checklist sent by the Home Office’s Visa Information service. It said “download and print your supporting document checklist”. Again no mention of all 9 pages. What happened to the policy of not wasting paper to save the world’s trees?

Why can't they add "make sure to print out the final signature page"?

"On your phone find the message in your email to download and print your supporting document and we can print it for you. Just the 9th page $1." Big problem. Eventually, as I had to set up my email on the phone we carried with us, I did get in to my email and located the document but then we couldn’t forward it to VFS-Global's email. Caput!

“We can do it another way. Sign this form and tick which documents you have uploaded.”

Now we had paid extra fee for VFS-Global to do a prior document check for us although even now we have had no feedback on what they did other than a message later to say that our application has been sent to the UK.

I did pose one question. “I have uploaded a copy of one document but only just this morning we have managed to obtain the original. Should we upload that?

“Your wife can now go for her biometrics. We can send an SMS text when your passport is ready for collection – around 6 weeks. $4.”

15 minutes later the wife emerged from inside the cubby-hole. She had to wait in the corner for a few minutes until another visitor was processed - no room to pass each other. The $4 cost me $10 as I didn’t get my change from the wife, gone in to the one-way bank.

So that is that.

At least for now.

I wish to add that the VFS-Global staff were polite, in the end proved to be helpful, and to get the job done.  They operate under the rules set by the company that claims "to be providing exceptional customer service, ensuring convenient and seamless experiences".

I wonder though what would have happened if UKVI has not notified them that I would be visiting them again. In the exchanges with the Home Office I mentioned that I'd encountered issues with VFS-Global before. That was for a UK visa for the wife's nephew when it claimed that I'd used the wrong online application form.  I hadn't.  My complaint about them was "partially" upheld. My form was accepted without ado. 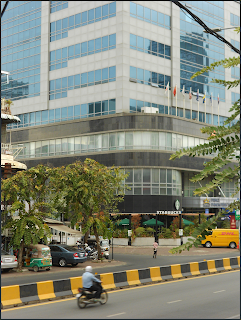 Success!  We do indeed have a new visa for the wife to enter UK, as  a visitor.  Here she is on her way going to the Cubby Hole, below the 'S' of Starbucks, at the time they allow for collection of passports.  She suffered a snag - something to do with her not bringing her receipt for the $4 text message fee. She told them that it was at home. But they let her have her passport anyway. She told them that I was in the restaurant across the street.

Now the House of Commons Home Affairs Committee told me that it wanted a review of the arrangement with VFS-Global but I have not been able to find an update on it.  I did see that similar questions were asked of it in South Africa that has also like 64 other countries entrusted it with similar work.

I did come across this article and a quote from an Immigration Lawyer in UK:

As I told the Home Office the problem is that as "customers" are not British, they just want their visa to enter the UK, most put up with attitudes, behaviour and levels of service, that most Britons would not find acceptable in this day and age.  VFS-Global says it wants feedback but unless it's praise they ignore it.

One thing it most certainly not is "a world class service for people using our visa systems."

We've received a message to say that we can go to collect Viraden's passport (next week during passport collection times). No-one has said her visa was refused, so here's hoping! They did also email me. That was free.