Mind how you go!

"Wow!” For some strange reason "Wow" is the desired reaction you need to obtain if you're selling your house in the UK. At least that's what is said on one TV show in the UK.  The  Kate Bush-like gasp of amazement that matters most is for first sight of kitchens and bathrooms. Yes, if you get a Wow a deal will surely follow.


In Cambodia you don't see many bathrooms with the Wow-factor. “Errggh!” is more likely, even in salubrious establishments and residences. Cleanliness along with godliness haven't quite taken hold yet. 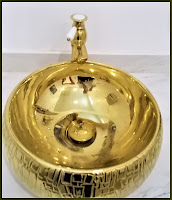 Imagine my surprise therefore to hear about elite Cambodians abroad going to the opposite extreme. An investigative journalist chum exposed acquisition of a palatial property in London that may well have come with with gold fittings in the bathroom. If they maintain them as they do at home, the glisten will soon go, they'll lose their glow.

When I grew up in the North East of England, too many years ago to mention, we had a “Dick Whittington” impression of London where “the streets were paved with gold”. Now Dick might have soon been disavowed of that belief once he made it there but what would he have made of gold bathroom fittings?   He was just ahead of his time. We do know of course about the solid-gold toilet not far away in Blenheim Palace, the family “seat” of famous wartime Prime Minister Winston Churchill. It was stolen. The Police had nothing to go on.

Toilet humour reminds me of a brush with fame. One of our most famous Northumberland places is “Holy Island” also called Lindisfarne that loaned its name to a local pop group that also found fame in the 1970s far beyond Newcastle-upon-Tyne. Some members are still around and perform. We've seen them in Alnwick and Dunstan. By chance all those years ago I met up with the original band in London when we booked them to appear at our college. They were homesick and that was in the days before the North East's greatest culinary gift to the world – Greggs – had made its mark.


I did manage to console them with a visit to the White Hart the only pub in SW London that sold Newcastle Ales. Needless to say the pub “crack” (local slang for a chat) was about their big hit song “The Fog on the Tyne is all mine all mine.....”. The explanation comes later in the song, if you listen carefully and get the.... err... drift, shall we say: “We can have a wee wee, we can have a wet on the wall”. You see in those days many male toilets were outdoors and consisted of a concrete wall with a drainage trench below. So you can picture how in the depths of Winter, a season that can last all-year-round in the chilly North-East, steam would emanate from hot pee splashing on icy cold walls – the not so-shrewd observation of the Lindisfarne boys. 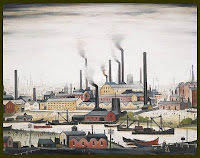 They would do as every other boy did in those days, Summer or Winter, aim to see how high-up the wall he could pee, maximising the steam effect and creating his own Fog on the Tyne!  By the way contrary to local opinion another popular song “Dirty Old Town” is not about Newcastle or Sunderland but Salford.  In fact my namesake LS Lowry captures it admirably in his paintings.

Dirty old town, sky-high concrete walls, and if not fog exactly but an abundance of air-born pollution brings us “convenient”ly back to modern-day Cambodia and Phnom Penh. Who would have thought that an exile from London would set his heart on cleaning it up? Well at least he's.... aiming to reform local lavatorial habits, especially their hand-washing inclinations, or lack of them to be precise.  He even began this thankless quest before #Covid19 struck. 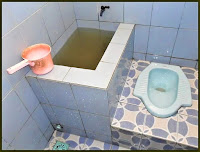 20 years ago in Cambodia, apart from a nearby bush or hidden corner, you were hard-pressed to find somewhere to relieve yourself let alone one relatively comfortable and hygienic. If you succeeded, it would be confined to the “stand and deliver” facility. Today they're still popular although sit-along “Western-style” pedestals have thankfully made in-roads, as have proper urinals.

Not the bog standard bog in Cambodia but a cleaner one to be gentle on the eyes of readers. 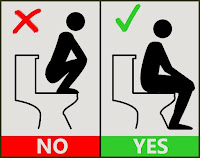 As with other Western imports the new pedestal-style toilets clashed with local habits, requiring some education. Posters can be see to this day. 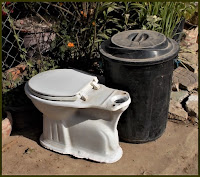 One more oddity of late, for some unknown reason, a spate of discarded “Western” toilets keeps appearing around Takhmau. One even had a toilet-seat intact and that is a definite rarity. Our most famous neighbour PM Hun Sen has been stirring-up anti-Westerner sentiments, but is this a reprisal too far?

Old or new in Cambodia these toilet facilities have one thing in common.  They're seldom cleaned.  They're often in a state of disrepair – the cistern-lid is off or no cistern at all! You may admire your salubrious even sumptuous establishment, enjoying the fine wine, food and “bon viveur”, but Woe Betide if you go to the ”WC”, which by the way is now the accepted term in Khmer. The vernacular words for No 1 and No 2 movements have fallen out of favour – some folks kept mispronouncing “Pochentong” airport, which might go a long way to explain why it's been renamed as Phnom Penh International Airport.

Another little quirk, in the apparent absence of disinfectant and those expensive cube-things Westerners use, what do Cambodians deposit in their facilities?  Don't be surprised to see a block of ice in there. Posher places put in a bar of soap. Urinals, presumably to counter the smell, are often graced with slices of fresh lemon or lime and even pineapple slices! Best to avoid asking for lemon or pineapple in your drinks, just in case they know where to get them from for you. 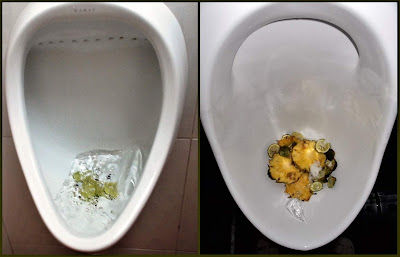 Urinals too can be a challenge. Many do benefit from a simple soak-away trench. Unfortunately sometimes the connecting pipe is missing, so you pee on your feet!

Toilet rolls have been a rarity in Cambodia long before the Covid19 panic-buying. You'll see local womenfolk indicating an imminent visit, not by picking up their handbag but by gathering a pile of tissues that adorn restaurant tables. Foreign women only make the mistake once of not copying them. Every visitor gets to learn to use the bum gun and ultimately to savour it.

Finally the lady “cleaner” by the WC door watching you come and go, is not there to clean the place but to relieve you a little more – of a few Cambodia riels. It's pay-as-you go, naturally, as much else in Cambodia.  These "Guardian Angels" have come in to their own in the Covid age, armed with her spray, she'll see you sanitise your hands, while her friends do the same when you first come in. 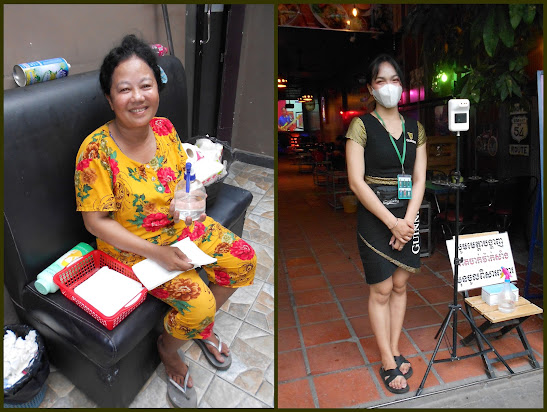 Grateful to Allie Volpe in "We’ve Been Pooping Wrong All Along" for making me realise (a) I should have said more about bidets - her movement makes a compelling case - and (b) the bidet, or a His'n Hers combination are essential for the "Wow" bathroom factor.

In earlier blogs I have made the point that the first sign of success in our development projects, in improving lives and livelihoods, is not what most in the West would imagine. It is the first sight of a TV aerial above a grass or corrugated iron roof. Even before that an old decrepit motor-cycle might appear. In recent years mobile telephones have become early priorities. The vast expansion of easy credit via Micro-Finance Organisations (that has spawned so many ills) has meant new or quite new motor-cycles and smart-phones can be seen too.

Oddly a lower priority still to this day is installing proper toilets or low-cost latrines, despite our efforts to point them in the right direction. It's a strange world but some of us still aim to please!

Artist Banksy has done a lot to change perceptions of images posted publicly but when his art-form started it was regarded as a menace and an eye-sight. How times have changed.  Interestingly it is only just beginning to emerge in Cambodia.

I have yet to see the Khmer version of "Clap your hand and jump for joy, for I was here before Kilroy" but there are some to be found. It was also a Glasgow bog-wall message that gave rise to one of my most popular articles and blogs. 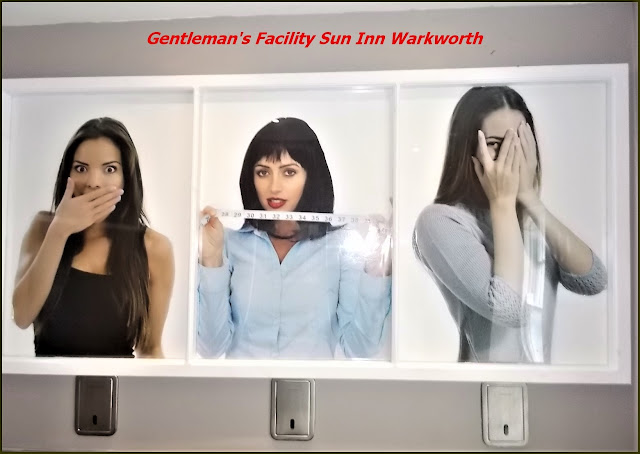 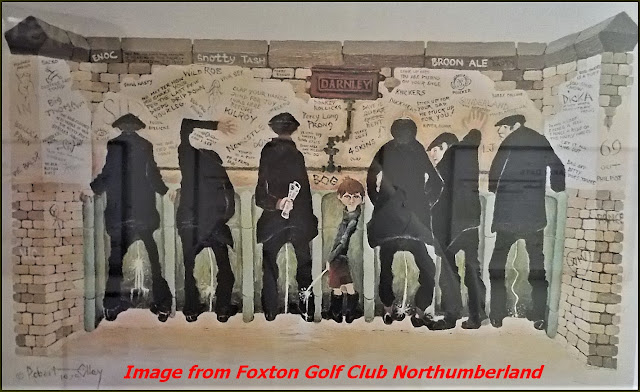