Time and Tide Waits for No Man


If there is one thing in Northumberland that reminds me of parallels in Cambodia it is the Holy Island crossing, where fools never cease to try beating the tide and end up marooned in mid-sea.  Even a Buddhist monk in this video defies his Karma as if to allow me to make my connection here with Cambodia.


It is an object lesson in the futility of resisting forces of nature.  In the end nature will always win out even if in the meantime and temporarily the grandest of man-made constructions might tame it.  The problem, shared by Holy Island and by Cambodia, is there are no grand schemes.  Yet despite that people still plough on anyway - fools making waves.

Last week, after good flights from Manchester to Phnom Penh via Hong Kong, what was our first sight of Cambodia as we descended through the cloud cover?


It was the River Mekong and its tributaries the Tonle Sap and Tonle Bassac as we neared their confluence. And what caught the eye?  No, not the Royal Palace nor the awful new tower-blocks that have blotted the sky-line of the “Paris of the East”, our Pearl of Asia.  As the air-plane wings banked, we looked straight down on a sand-barge.  A fully-laden sand-barge plying along mid-river. It was generating enormous waves that reached the river-banks.

Now I have sat and gazed at these many a time over an occasional beer by the riverside in Takhmau, as my Twitter followers know.  I have also passed the sand-barges on the river ferry- service that always slow down for them.  I see now why, why the boat suddenly sways.

Although more damage is done by the constant pumping of sand from the river bed-rock, to feed Phnom Penh’s massive urban construction frenzy, this extra sustained onslaught on nature can’t help, can it?  The poor eco-system of the Mekong is taking all kinds of hits from dams in the North to the uncontrolled dumping of waste and sewage along its entire length. 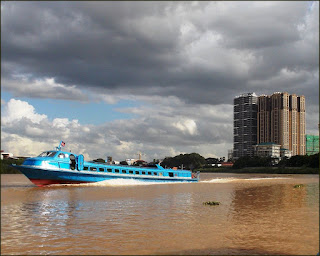 There are supposed to be joint bodies to protect the Mekong, even a new Chinese-led one of late – to complement its leading role in these vast infrastructure projects  – but to casual observers like me, people just do what they want  Acts go on unabated, unpunished.

China of course would solve Holy Island’s problem in an instant – with concrete.   It would be an infinitesimally small undertaking for China in size and expense. It has just completed the longest sea-bridge in the world.

But who wants such concrete monstrosities?*

* A question for Prince Charles? (he's good on "carbunkles".

Notes about the River Mekong

There has been much disquiet expressed about the damming of the Mekong and its tributaries, most concerned with the likely impact on its bio-diversity with millions of people depending on it for agriculture and fisheries.  Cambodia and communities around the Tonle Saple Lake as well as those in the Lower Mekong and Delta area are especially vulnerable.  Two very good reports have been published this year.  Abbie Sieff questions hydro-power. An answer soon came with both Julie Wallace and Alessandro Marazzi-Sassoon reporting on an early disaster with unintended consequences.