Malfeasance in Foreign Aid: the Essay

Some images first to set the scene: 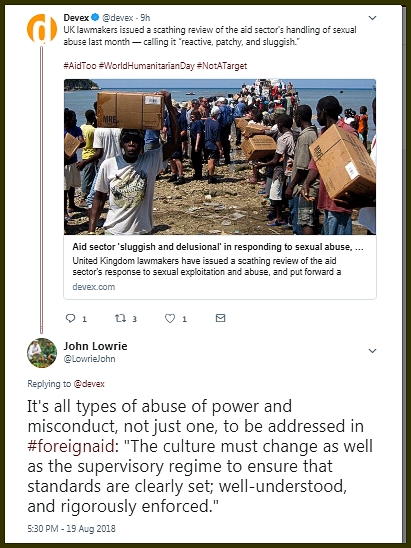 Link to Tweet and full article in DEVEX by Sophie Edwards.
My comment at the end of the article:

This piece is about a definition submitted to Wikipedia I hope to add to Foreign Aid literature so that misconduct whenever it occurs is not kept being seen in isolation but part of a wider phenomenon peculiar to the sector, with circumstances creating a culture that tolerates it instead of deterring it.

As well as "Malfeasance in Foreign Aid", there are three closely-related pages:

My suggestions for amendments here can be found below "Notes".

There is some excellent work done by Oliver May, formerly of OXFAM, including an excellent tool-kit that should be used extensively by all charities and NGOs operating abroad.

Malfeasance  [1] in Foreign Aid [2] or Development Aid [3] is wrongdoing by an officer or agent of an organisation, public or private, not-for-profit or commercial, engaged in the administration and arrangement of funds and assets given for the relief and development of people in need usually in a “developing” or “least developed country”. [4].  Malfeasance also occurs in Humanitarian Aid. [5] (Old English includes the word "misfeasance".)

Malfeasance in Foreign Aid has existed for many years, reported as far back as 2002 [6] and before, but has become more well-known after 2017 because of serious cases rapidly receiving widespread attention in mainstream and social media.