“Backpacker Tourism can be a Force for Good.” Says Aid & Development Worker 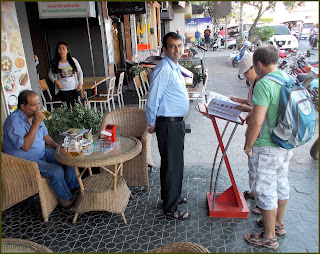 As appeared in Backpacker South East Asia and Ethical Tourism from 2 October 2017. Among many points I wanted to make, the most significant one is to go out just before Saint Helena Island's new regular air service begins on 14 October. As I re-tweeted to perhaps the island's best tourism advocates, who are entirely self-funded:. "Ability of Saints to come; go and stay [financially] is just as important as tourist dollars". So far this has not been built in to air-fare pricing policies.  Without it, eventually, it will fundamentally change the make-up, character and culture of the island, as  the ratio of locals to outsiders shifts, exactly as we have seen wherever places rely mainly on tourism. (My most popular blog about Saint Helena is here, and a summary of other postings here.)

“Backpacker Tourism can be a Force for Good.” Says Aid & Development Worker


“The Middle of Somewhere”*


It was fixed haphazardly, not intended to last long. “Word-of-mouth” would suffice instead. Backpackers would find it no problem. So they did. Job done!

The name was apt, ushering in tiny Sen Monorom, the capital of Mondulkiri’s, transition from ‘a nowhere to a somewhere’. The sign was as unprepossessing as the early visitors it beckoned. Cambodia’s remotest and largest province, Mondulkiri, had suddenly entered the world of tourism, for good or for ill.


It wasn’t the first place where I’d seen this. Gisenyi in Rwanda was another. It is a border town in Eastern Rwanda, synonymous with genocide; an erupted volcano; and roads full of fleeing refugees. They had nowhere to go to, only somewhere to escape from, and eventually return to. Once back home, they didn’t have long to wait for curious visitors to arrive.

Even earlier than Rwanda, I was around in the 1990s when many lake-shore villages of Malawi opened-up for the first-time to the outside world. Intrepid adventurers were following in the footsteps of famous missionary David Livingstone.

Today, I see a familiar pattern in all three countries.

The first foreign visitors, especially after conflict or disaster, are people like me – aid and development workers.

Next, sometimes even beating us there, are… backpackers.

Most are just passing through, as they do, their length of stay dictated more by shoestring budgets than attractions to be discovered or savoured.

Backpackers don’t go somewhere to make changes, nor do they expect changes to be made for them. Some put down roots, enamoured by a place. They even start businesses, with or for locals and other backpackers. They are, as I say, usually unprepossessing. Despite their bad reputation, more often than not, the most responsible of visitors, unlike those who follow in their wake.

If there are no fancy hotels or restaurants; no air-conditioned luxury coaches, and no shops piled high with wares, there isn’t much to spend your money on, even if you have a lot.

Even guides like Lonely Planet may not help visitors get truly off the beaten track. They’re on their own without any of the creature comforts of home. Is that not the experience most backpackers want? They go to embrace local people and their culture. So that’s where most of their money ends up. Local restaurants, the same places as the locals eat, family-run guesthouses and shops.

Backpackers may not spend a lot, but almost every one of their dollars stays in the local economy.

It begs the question, “Why does backpacking not feature in tourism developments?”

Why do backpackers get a bad rap, out of proportion to the tiny fraction who misbehave?

In Southeast Asia, it’s the Full Moon Party and ‘Tubing in Vang Vieng’ which are always quoted in arguments about how detrimental backpackers are to local culture.

That is the pattern of tourism. It is seen most visibly around Angkor Wat, Siem Reap, Cambodia’s most famous and popular international tourist spot. Today, it’s far cry from the 1990s. Millions of visitors jet in to the hundreds of four and five-star hotels. Despite that, Siem Reap province remains as poor as others in Cambodia.

Tiny Saint Helena Island, so-called “Secret of the South Atlantic” is about to follow suit right now in 2017, for good or for ill. It is definitely a speck in the middle of nowhere.

Its new airport is at long last able to take regular flights, after a two-year delay due to wind shear. The cheapest flight, at over $1,000 USD, is off-putting to backpackers and humble Saint Helenians who left home to live and work abroad.

However, despite that, the island is just about the perfect destination to hang out and its people welcoming. Those close companions of the backpacker – the overseas volunteer – can vouch to that.  Several have made their way there; settled and left their mark.

Airlines like backpackers. They put ‘bums on seats’ making routes more viable. Powers-that-be behind Saint Helena’s tourist plan (or is it an experiment?), reckon there’s no need for them. They anticipate that flights will be full. So will all the higher-end accommodation on offer. We’ll see when the novelty and initial rush wears off. For now, though, there are no budget hostels.

Author Notes on the article:

The “Middle of Somewhere Café” was named and opened by American Bill Herod, long-time development worker and resident in Cambodia. He moved to Mondulkiri for his active retirement. His aim was not just to cater for budget travellers but start an enterprise to benefit the poor “Bunong” indigenous people. He helped them to produce and market handicrafts and provided a refreshing breakfast to market traders who often walked hours during the night over rough terrain to sell their wares.

John Lowrie is a human resources officer by profession. He has been an aid and development worker since 1985, in developing countries St Helena Island; Malawi, Rwanda and in Cambodia from 1998.

There he has been country representative of three international NGOs and formal adviser to nine local development and human rights organisations. There are recurring threads through his published articles and blogs. Responsible or ethical development especially tourism has featured increasingly since 2000.  He was among the first to observe the harmful aspects of “voluntourism” and the proliferation of dubious “orphanages” taking advantage of tourists while exploiting children.

At the same time, as described in this article, he observed former indigenous people’s lands opened up to all kinds of development, displacing them from their lands and traditional livelihoods. “Eco-tourism” may help. However, facilities like those offered by Bill Herod are now being supplanted by higher-end hotels, filled up with package tourists, operated by outside interests with little or no regard for local people.

John’s thoughts about backpackers and their notable absence from Saint Helena’s tourist plans were hatched over a beer in Phnom Penh, as captured on his blog here.
Posted by ANorthumbrianAbroad