Dancing to the party's tune?

Foreword to this blog:

The main story in this blog was written in August 2017, and then as if I had yet again tempted fate, certain things came to pass.  Therefore I have added an update regarding the arrest of Opposition Leader Kem Sokha; a surprising exchange I have had with his daughters, and my response to a strange piece in the Khmer Times. (Also at end of blog.)

Cambodians love dancing in formation, but will they dance to the ruling party's tune in 2018?

So coined Peter Beaumont of the Guardian in 2011. His article helps to explain the onslaught on media in Cambodia today. The ruling party thinks if no reporting, no rebellion!  Let's examine the context starting with a personal digression.

A lot of things happen to me over a beer. Back in 1997 one Saturday afternoon, overlooking Lake Malawi with the mountains of Tanzania and Mozambique in distant view, my quiet beer was abruptly disturbed by an enormous explosion. Buildings around me were obliterated. If it was not for the only solitary brick construction - a small toilet block - protecting me, I may well have suffered the same fate.


The Malawian Army blew up the arms-store of the Young Pioneers the fervent supporters of Malawi's President Hastings Banda. The military's sudden change of loyalty heralded the end of his 31 year rule. That led to a totally unprepared Opposition to take office.

A few years earlier, I was in Saudi Arabia working alongside Philippines colleagues. They were enthralled by events back home. The 31 year rule of Ferdinand Marcos was coming to a similar unplanned end, due to their People Power colour revolution. That was yellow by the way.

Prime Minister Hun Sen takes pride in keeping abreast of contemporary world affairs.  He would do well to reflect on the parallels from what happened to his former peers.

In all cases, as in Cambodia today, there was a populace tired of the same rule for so long.

All leaders had resisted change. Often they were in denial, surrounded by sycophantic aides.

They all took extreme measures to retain power.

Then each suddenly experienced unanticipated turns of events, and from unexpected quarters.

None had prepared properly for any kind of orderly handover of power, least of all to opponents, if looking ahead at all no further than their children. (Some like Suharto's had earned a a shared nickname "Toshiba" for their wanton profligacy.)

Their countries did indeed descend in to chaos.

It meant for each of these once proud leaders that the legacies they craved most - to be remembered for, to be appreciated for, to mark all their good deeds and works - were largely destroyed.

History is yet to be kind to any of them.

Fears have been ratcheted up in Cambodia of late, by the ruling party to hold on to power at any cost.

Peter Beaumont ended his article this way: “Albert Camus, who asked "what is a rebel?", and answering his own question, said: "A man who says no." It is at this point, when fear is gone, that whole nations say no. And it is when tyrants fall.”

It seems to me that far more people in Cambodia right now are thinking “No”!

We know that according to the National Election Committee the 46% who voted CNRP in 2017 Commune Elections, plus a few others, braved all the fears to say “No” to CPP.  How many who did vote CPP did so willingly? How many of the 14% of registered voters who chose not to vote were expressing “No”? And what of the electorate denied their vote, because of living and working away from home or having failed to satisfy officials when wanting to register?

It will not take much for those thinking “No” to be stirred in to action. Everyone saw this in 2014 when the post-election protests morphed with the industrial disputes around Phnom Penh. There really was a momentum building up until it was violently crushed - just before the tipping point when a whole nation was about to say “No”?

Cambodia has had two glimpses of such phenomenal spontaneous turnouts. Who can forget either of the scenes In Phnom Penh when Sam Rainsy returned from exile in 2013, or for Kem Ley's funeral? For all of its party machinery and generous inducements, CPP has never managed to cultivate such a turnout or any of the unbridled enthusiasm of the participants. They never will. 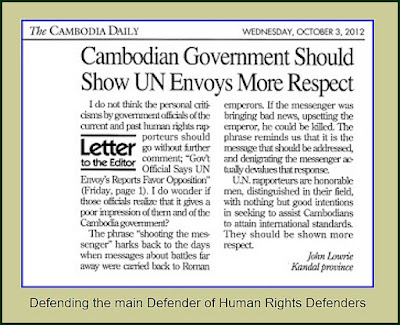 Every measure possible is being taken by the ruling party to prevent Cambodians from assembling and expressing such views. What is going on with the media is simply “shooting the messenger” once again in the vain hope that they will all stay at home forever. I made that point in relation to the UN Human Rights Rapporteurs, printed by the Cambodia Daily.

One way or another, it is hard to envisage anything other than terrible consequences for Cambodians from the current crackdown.  The CPP rock will meet the hard place of the people, especially the youth who without any shadow of doubt want change.

John Lowrie is a human resources officer by profession. He has been an aid and development worker since 1985, working in five developing countries, and Cambodia since 1998 where he has been country representative of three international NGOs and formal adviser to seven local development and human rights organizations.

One problem with being semi-retired, is not being fully in-the-loop, no longer obtaining as much intimate inside knowledge of interactions with government officials, or imparting suggestions in the same vein. Of course that loss is compensated by the ability to speak more freely, not hidebound by backers or niceties to maintain rapport with those officials for business to be done.  But the obvious point is sometimes not known. Some of us do have to maintain constructive engagement even with the most problemmatical of officials through the most troubled of times. I do wonder though how many today are fulfilling that vital task; and injecting some constraint necessarily concealed?  Have we replaced people like the late Scott Lieper whose wisdom, always proffered surreptitiously, must be sorely missed in circumstances like today? I doubt it.

Within hours of posting this blog and two related tweets, the Cambodian Government arrested Opposition leader Kem Sokha - probably the last major story to be covered by the Cambodia Daily.  He is accused of treason for having daalogue with US advisers about how to wrest power from CPP.

Now I have known Kem Sokha since he chaired the National Assembly's Human Rights Commission in the 1990s and of course been responsible for major democracy and human rights training funded by the US and other donors. In fact the demise of my NGO led to the elevation of Kem Sokha and creation of CCHR in 2002 to continue its work.

I am therefore uniquely qualified to point out that there is absolutely nothing treasonable, nor unconstitutional, only legitimate pre-election posturings in the "incriminating" videos.  Furthermore in those training sessions and forums not only did the ruling party take full part, but Ministers presided over the opening and closing ceremonies. Legally how can there be any case to answer?

The big question is whether all this will bring the most overdue condemnation from the international community? Will sanctions result?  Or only words?

Or as is most likely, as PM Hun Sen will have calculated, will he just ride out the storm until a new mandate is secured? He's not thinking much beyond that date next year, banking on "busines-as-usual" will be resumed?  That is what many folks will settle for - those that have thrown their lot in with the ruling elite and its vested interests that control the economy.

The only problem will be what happens next with the disaffected and frustrated?

Update 12 September - my comments not welcomed by Kem Sokha's daughters.

It is my view that in these troubling times in Cambodia, voices of criticism must remain open and disciplined. I therefore commented on this letter in the Phnom Penh Post.

CNRP ought in my view:
In other words " Stck to [best] international standards! 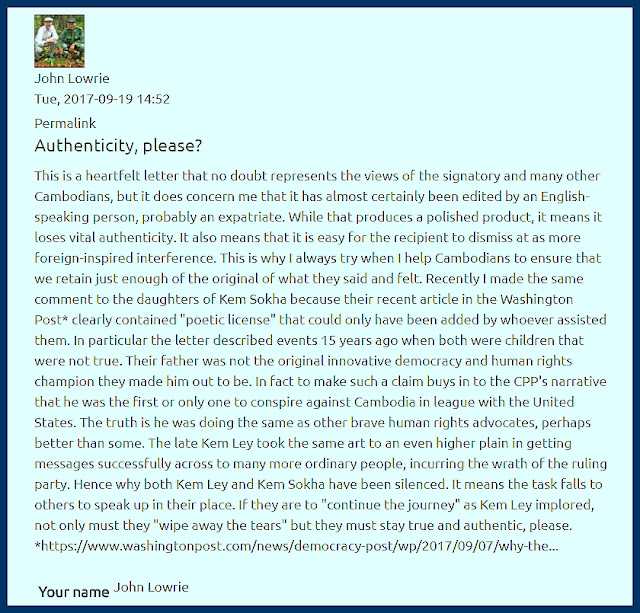 A great deal has been written about the current sad events in Cambodia. Many are still seeking to influence the influencers (to quote my own tweet) or looking for other angles.  One of the strangest ones is in the Khmer Times, worthy of comment, portraying views of the Information Minister in the Lon Nol government of the Pre-Khmer Rouge era. So far my comment has not been taken up by the Khmer Times.  Here its is:

I find it strange that the Khmer Times would go all the way back to the Lon Nol era and Chhang Song in order to shed light on the Kem Sokha case. The reported comments are interesting if at times contradictory:

“He [Kem Sokha] claimed the US gave money for a plan to topple the government.
They gave money in order to educate people to learn how to choose their own leader to lead the government through free and fair elections.”

It is not clear which of the two sentences Mr Chhlong stands by or if somehow both are meant to apply?

I can certainly vouch for the fact that the United States and many other donors have given a lot of money to Cambodia since 1993. They do want to bring about free; fair and credible elections as well as a final end to conflict and violence employed as means to govern.

Not only has money been provided towards these laudable aims but also technical expertise from many international advisors. Kem Sokha refers to them in the video tape cited as proof of his treason. They are according to the Prime Minister “the 'third hand', helping the opposition CNRP to invoke regime change”.
The term “regime change” is banded about, as if it is automatically bad. It need not be.

All of these advisors, many distinguished in their fields, not only advocate “change of regime” but also “change in regime”. Their messages of democracy; good governance and citizen-friendly policies are addressed even more to the governing party than to opposition ones for obvious reasons. They can be put in to practice sooner rather than later. Over the last 24 years, ruling party leaders and officials have indeed taken full part, and in greater numbers, in the exact same educational sessions as Kem Sokha describes.

It is a fair question to pose if the United States favours CNRP over CPP? Probably it does for now. CNRP appears to share more of its values, but then such backing is given neither exclusively nor unconditionally.

CPP could choose to adopt similar values, after all they have been put directly to them over many years, and would gain favour. The converse applies to CNRP.

If - or should I say when - CNRP manifests contrary values, as it does for example when referring to Vietnam, then it can expect to forfeit international backing and fall rapidly from favour.

Although demography is making Cambodia a younger electorate, the trend is not stopping it from maturing in politics and public affairs - one clear benefit of modern technology. In every election to date it has never given one party an overwhelming majority over others. They want parties to work together. They don't want either dictatorship or boycotts. The signs are clear and first-hand. Who needs them second-hand or third-hand? 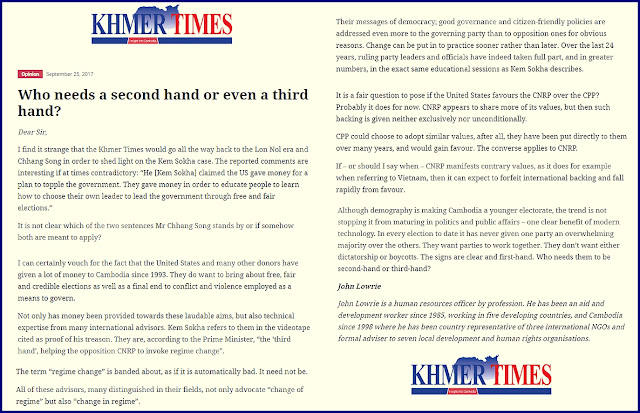