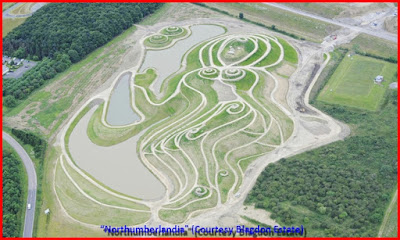 This is a Yorkshire English saying that says you will find money in dirt.  Wherever you have men with spades or with JCBs, you’ll see them forever digging holes.

Bizarrely, at times, the pastime has been the answer to the world’s economic woes.

And then, once we have all that dirt dug up and piled up what do we do with it, and the hole left?

Do we create a modern art-work?

Or do we create a self-perpetuating cycle of self-harm as in today’s Cambodia?

My home county is certainly good at digging holes.  We used to host a once large and proud coal mining industry.  But then, not only did we dig up coal, we dug up other types of dirt, called slag, that for centuries was piled up, transforming or blighting the countryside.  Fellow miners in South Wales did the same until the disastrous Aberfan slag-heap collapse that killed 116 school-children in 1966.

At least we learned from our stupidity and today have something arty to show instead.

“Northumberlandia,” pictured above, is a 1,300-foot-long earthwork of a curvy woman designed by landscape architect Charles Jencks, from a 1.5-million-ton slag heap taken from the Shotton coal mine. She’s the largest human earthwork in the world. 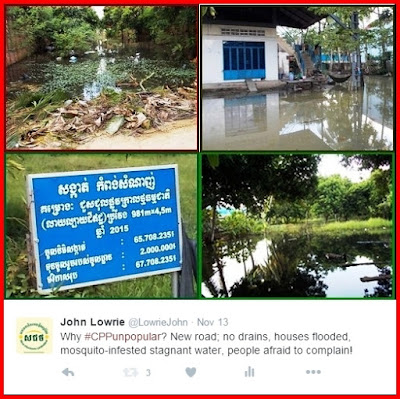 I wonder though if Cambodian leaders can learn from our mistakes before they make their own with disastrous results?  In fact we already have tragedies with children drowning in the new holes.  Just as lethal, all of these holes are creating mosquito-breeding grounds, increasing the incidence of malaria, dengue and other water-borne infections.

So what is going on, what is causing this, and where is it all going to end?  Hydrologists and Soil Scientists could give proper answers.  Here is my take:

It is a vicious circle. Which step comes first varies: take them in any order, here goes:


1       Someone decides to build a new road, raised half a metre or so.  They dig holes to collect the infill, but don’t install culverts, so after tropical downpours:
2       Natural drainage channels are blocked; water is trapped and accumulates as well as in the newly-excavated holes.
3       Low-lying areas around houses are inundated with every heavy downpour.
4       Wealthier people order trucks-load of dirt to raise their surrounds to restore the level above the new road.
5       The top dirt from the new road and newly-raised grounds washes off in the rains.  Invariably it is more clayish than the naturally sandy topsoil, causing water to accumulate and soak away much more slowly.

The end product is the same.  There is much more water around that becomes stagnant. 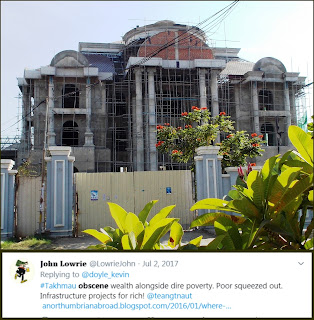 As many people today still do not have latrines, and there is no sewage disposal networks for those who do or who have flushing toilets, contamination finds its way in to the stagnant water. (The thing is you will find it hard to persuade some Cambodians to buy a latrine before or instead of a TV or mobile phone!)

And this vicious circle is going on all over the Phnom Penh and surrounds urban area.

The worst feature is that people are afraid of complaining, even if they and their children are sick from water-borne diseases.

It's an obvious question: "Development for whom?" Sadly there is just one answer in most places and especially Cambodia.  The elite are now constructing their new modest abodes like this one in Takhmau. 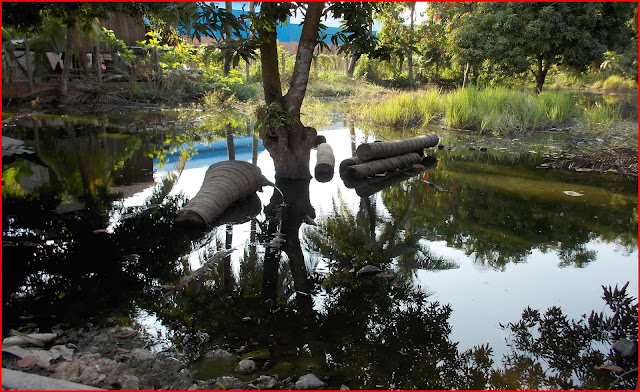 The same scene as in my November tweet (bottom right) as on 30 January 2016.  It may look pretty but it isn't, and nor is the surrounding air in what is a built-up area with many children. 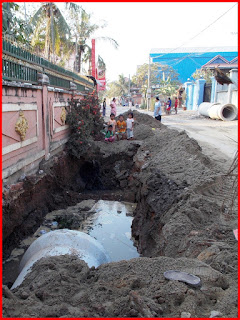 Now there are some new and larger drains being installed around Takhmau, digging up some of the newly-metaled roads.  Personally I can't yet see the logic of a plan. I expect it goes back to our floods in 2010. The cynic in me thinks the plan is to save the many Excellencies from getting their feet wet, when the electric gates of their mansions fail on them. Certainly, these new drains are not connecting with any of the new major stagnant pools.

'Hell on earth': the great urban scandal of family life lived on a rubbish dump


Well worth accessing is a great article in the Guardian  by Poppy MacPherson on a similar theme, something I touched upon in one of my blogs bemoaning the visiting of garbage sites as the latest tourist attraction for those wanting to be off the beaten track.

People around the world are campaigning about homelessness and rough-sleeping. By chance I photographed Takhmau bridge which provides shelter for several poor families and itinerants. Here's my tweet, 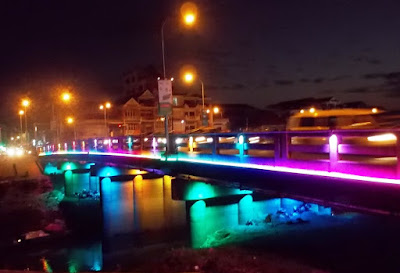