There's more to [NGOs] than meets the eye!

My favourite play on this blog-title idiom has to be with one of the North-East’s finest gifts to the culinary-discerning beyond our boundaries.  Greggs: More Than Meats the Pie

Now Cambodians like their bakery products too.  But what has this to do with NGOs?  Quite a lot as it happens, if you follow my way of linking life in Northumberland to the outside world.  It helps to make my points about Cambodia that is now (May 2015) contemplating a new law to regulate NGOs.


Greggs are noted for their consistent quality, fine by most customers, relative to price.  Suppose this - if one day, customers started complaining about stomach problems after eating their products. Greggs and food-safety plus health authorities would take those complaints most seriously.  They would ascertain the facts and take action if necessary, including compensation.  Above all, they would want to solve any problem. Media would no doubt cover the story. Greggs would want to limit bad publicity try to turn it in to a good story for them by showing that they were taking responsible actions.

“Want to solve the problem?” in Cambodia would be an unlikely reaction of most retailers.  Denial is more probable, that is if any customers had the courage to complain.  Authorities would be unlikely to react either, unless a powerful person had suffered. In reality, when poor people suffer in Cambodia, the only people who stand up for them and render service to them are NGOs.  But not all NGOs.  Local media would probably regard the story “non-newsworthy”, simply put down as bad luck, not a sign of culpability, or maybe their reporters would be better rewarded for not covering it.

Suffering is a sign of many issues under the “gambit” of human rights, with death, rape, and violence among the worst.  In recent years, compulsory large-scale eviction of poor families from land, without compensation, has joined that list. These crimes occur in every country, but in Cambodia, state institutions of law enforcement and justice, have just not evolved to deal with them properly.  People lack faith in them to find justice.  As long as this exists, human rights NGOs are essential. To read more click for example on the two largest NGOs - LICADHO  or ADHOC.

Suffering covers another multitude of ills, especially in economic, social and cultural rights.  These are most usually addressed by “Development NGOs”, both international (INGOs) and local (LNGOs), usually with funding from foreign donors.  Given Cambodia’s resurgence economically, after 20 years, you would expect INGOs to be leaving or to be handing over to local LNGOs. Surprisingly some want to stick around.  Nobody is co-ordinating and managing what should be the logical end of foreign intervention.

Then there are a myriad of other NGOs  that far “more than meets the eye!”  They do warrant proper, professional and objective examination.  Many are inactive. Some are artificial creations with clear political loyalties. They were set up to counter NGOs seen as always critical. In fact some people move in and out of NGOs to and from political life in to government or opposition, even as “defectors”.  Some exist in several entities simultaneously.  Sometimes this is known, very often it is disguised with family members or close associates nominally in the NGO leadership.  I have come across several NGOs that are actually commercial entities, businesses with a slight if any philanthropic role, but nevertheless duly registered as NGOs.

Now a new NGO law could be helpful in creating a leaner, clearer, and genuine “Non-Governmental Organisation” sector, as part of a responsible Civil Society that benefits the country, and everyone in it, not just some.

However the portends are not good. What is planned falls well short of such a constructive reform. Powers are to rest with two ministries – Ministry of Foreign Affairs, for INGOs, and of Interior for LNGOs.

For most INGOs and many LNGOs, the Ministry of Planning, and/or perhaps the Council for Development of Cambodia, should be the authority to decide, preferably in conjunction with one of the NGO umbrella groups such as CCC or NGO Forum.  The key consideration is how the INGO or LNGO integrates in to Cambodia’s development plans and its public services delivery?  Everyone should agree on either assimilation in to mainstream services, or to remain outside of it, or alongside in an apprpriately beneficial role.  As I have blogged elsewhere, there are few clear exit strategies in "NGO Land" and continued activity there is based more on winning donor funds than finding their place in a  coherent national plan.
For LNGOs, especially human rights ones, how can the Ministry of Interior, with its primary “law and order” responsibility, and in charge of Police and Local Government, be appropriate to decide about the fate of an NGO?  It does have a legitimate role when it comes to checking credentials of people involved, for example, in child care, and investigating cases of abuse.  But then that role conflicts with deciding if an NGO should exist or conduct business in ways that, by their very nature, must question its officials' conduct, who then in turn deliberate on the same NGO's legal and administrative formalities.
I can cite one example when one of my NGOs changed the Chairman of its Board of Directors. We hand-delivered the letter to the Ministry of Interior and for good measure sent a copy by registered mail as required by the Ministry of Foreign Affairs for INGO Country Representatives.  The ministry told us some time later that the change was not legal as it had not approved the change.  The official added that we had to have its approval in writing and that communications via the Ministry of Posts and Telecommunictions were not approved – despite being the same government!
This ministry is unlikely to deliberate fairly, to protect the essential freedoms of Cambodian citizens, under the Cambodian Constitution and international instruments binding on Cambodia.  The problem is that the alternative choice – Ministry of Justice – has a similar conflict of interest given its responsibilities for how the courts operate.  The only proper way forward would be a new independent body that could enjoy widespread support, perhaps similar to the United Kingdom’s Charities Commission.

In all cases, regardless of the ministry or body that decides in the first instance, there should be a genuine independent appeal, such as to a National Assembly Commission or to a special body set up for the purpose.

And then there are the other “NGOs”.  Quite frankly there is no option but to have some kind of inter-ministerial group, again preferably with participation of CCC or NGO Forum, to examine them.  If they are not genuine unaffiliated civil society organisations, they cannot be NGOs.

One final word.  What about the growing number of looser gatherings of citizens – community groups?  When do such groups become a permanent entity requiring formal recognition?  The NGO law needs to be clear about the criteria to govern this.  If not the old mantra will come back in to play “Unless it has been formally allowed, it is prohibited!”  That would be a critical step back from democracy.

This will be easy for seasoned Cambodia watchers.  Firstly a word on pies in Cambodia.  We do have them and some would pass the Gregg’s test.  “Pelican” are pretty good and came out top, against stiff competition from even the Aussie Adelaide fraternity - famous for its pies floating in pea soup.

Study these pictures closely and decide that this bakery is more popular than two nearby because:

Oh and by the way, I have passed this bakery thousands of times, and I am yet to hear a complaint, even against folks manhandling the delicious bread loaves.


Click on this link and scroll down to the bottom, to see how you did.

June 2016: For Pie and Pasty Fans in and around Alnwick - please see my tip and review: 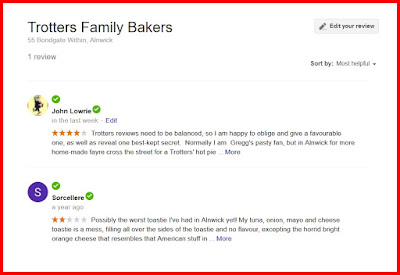