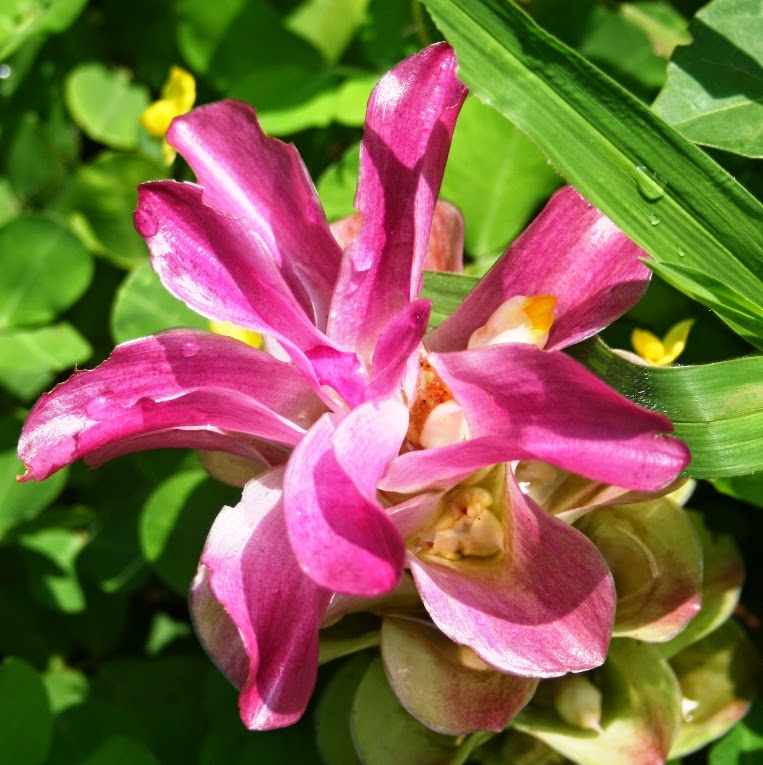 I came across, one of the most fascinating stories of my overseas aid career, purely by accident.  This story apparently explains the existence of the Bunong indigenous people in Cambodia, now in danger of dying out. Although they total around 30,000 in all, they are under much pressure to integrate in to mainstream Khmer Society.

The story centres on the plant ginger.  A Google search then showed up, surprisingly “Northumberland Ginger Tea” , presumbly using Bergamot leaves, as first used for Early Grey and his Howick water? (Not to be confused with Ringtons Teas or another very fine pure Northumberland Tea.)

Then next I saw another interesting connection to go with my story.

Ginger did feature in our Northumbrian childhoods in the 1950s and 60s.  It was popular in cakes and home-made ginger beer.  I doubt if there was a school playground without one child nicknamed “Ginger” who was of course one of our popular comic characters. And Rington's Ginger Snaps, if eaten morish-style straightaway, can't be beaten.

“Ginger” would have been the name of our pet pussy cat, to follow on from “Korky” and “Dennis” also of course comic characters.  But she was destined for something better.  Our village, Longhoughton, even today still hosts the Royal Air Office, including the elite families of top officers who live in Bader Crescent.  One of those families was posted away and needed a home for…….”Prudence”.  We were also assured that “Pru” (with a rolling “rrrrr”) was not a ginger tabby but a “Marmalade” cat, and of distinct class and breeding.

Pru, being a typical cat, was quite unconcerned about her elite origins or her fall from grace by joining us.  We continued her preferred diet of raw liver, so she adopted and took over our home, duly switching her loyalty, no problem.

The years passed by and Pru expended the last of her nine lives in the late 1960s. Ginger in its various forms does still crop up periodically.  It has enjoyed hey-days since Eastern exotic foods became popular.  It features today in Cambodian cooking, with “Fried-chicken-in-ginger” very popular.  After John Sina, Sheamus the ginger-haired Celtic wrestler, is a favourite on local TV.

Then in 2010, my knowledge and appreciation of ginger changed by accident and dramatically.

I was up in Mondulkiri, the North-East Cambodian Highlands.  True-to-form I was alone at the office at 8 am, the official opening time, and still locked out.  Staff were seldom on time as is customary in Cambodia.  Many officials are still taking breakfast or coffee at such an unearthly early hour.   So I wandered around our traditional medicinal plants garden.  There I spotted the fine pink flower, shown above, with a dew drop still visible on a stem.

Later, I asked my Botanist colleague, Nico Savajol, about it.  We had to trace its story and importance for Bunong people.  Ginger, it seems has far more properties and powers than we thought. 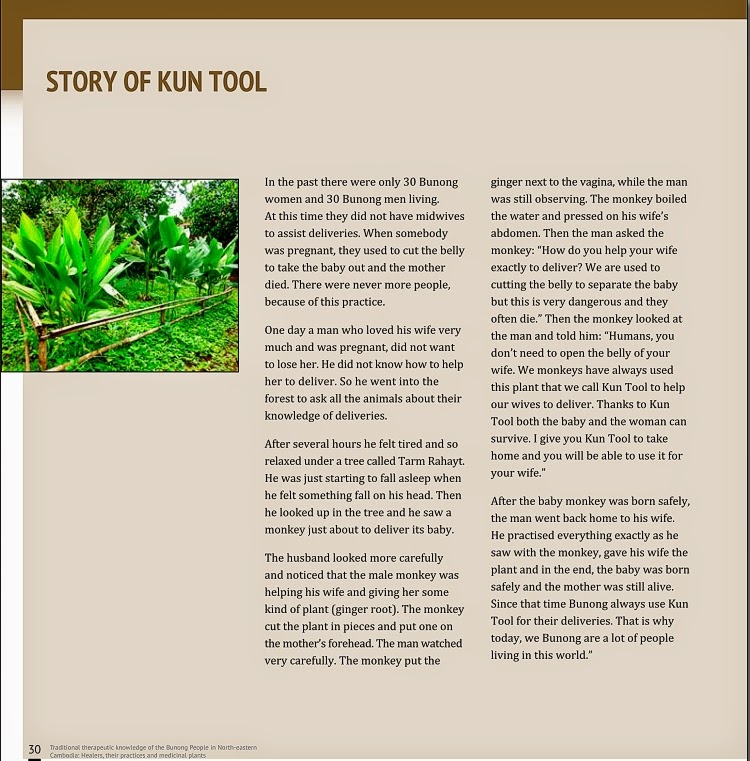 “In the past there were only 30 Bunong women and 30 Bunong men living. At this time they did not have midwives to assist deliveries. When somebody was pregnant, they used to cut the belly to take the baby out and the mother died. There were never more people, because of this practice.

One day a man who loved his wife very much and was pregnant, did not want to lose her. He did not know how to help her to deliver. So he went into the forest to ask all the animals about their knowledge of deliveries.

After several hours he felt tired and so relaxed under a tree called Tarm Rahayt. He was just starting to fall asleep when he felt something fall on his head. Then he looked up in the tree and he saw a monkey just about to deliver its baby.

The husband looked more carefully and noticed that the male monkey was helping his wife and giving her some kind of plant (ginger root). The monkey cut the plant in pieces and put one on the mother’s forehead. The man watched very carefully. The monkey put the ginger next to the vagina, while the man was still observing. The monkey boiled the water and pressed on his wife’s abdomen. Then the man asked the monkey: “How do you help your wife exactly to deliver? We are used to cutting the belly to separate the baby but this is very dangerous and they often die.” Then the monkey looked at the man and told him: “Humans, you don’t need to open the belly of your wife. We monkeys have always used this plant that we call Kun Tool to help our wives to deliver. Thanks to Kun Tool both the baby and the woman can survive. I give you Kun Tool to take home and you will be able to use it for your wife.”

After the baby monkey was born safely, the man went back home to his wife. He practised everything exactly as he saw with the monkey, gave his wife the plant and in the end, the baby was born safely and the mother was still alive. Since that time Bunong always use Kun Tool for their deliveries. That is why today, we Bunong are a lot of people living in this world.” 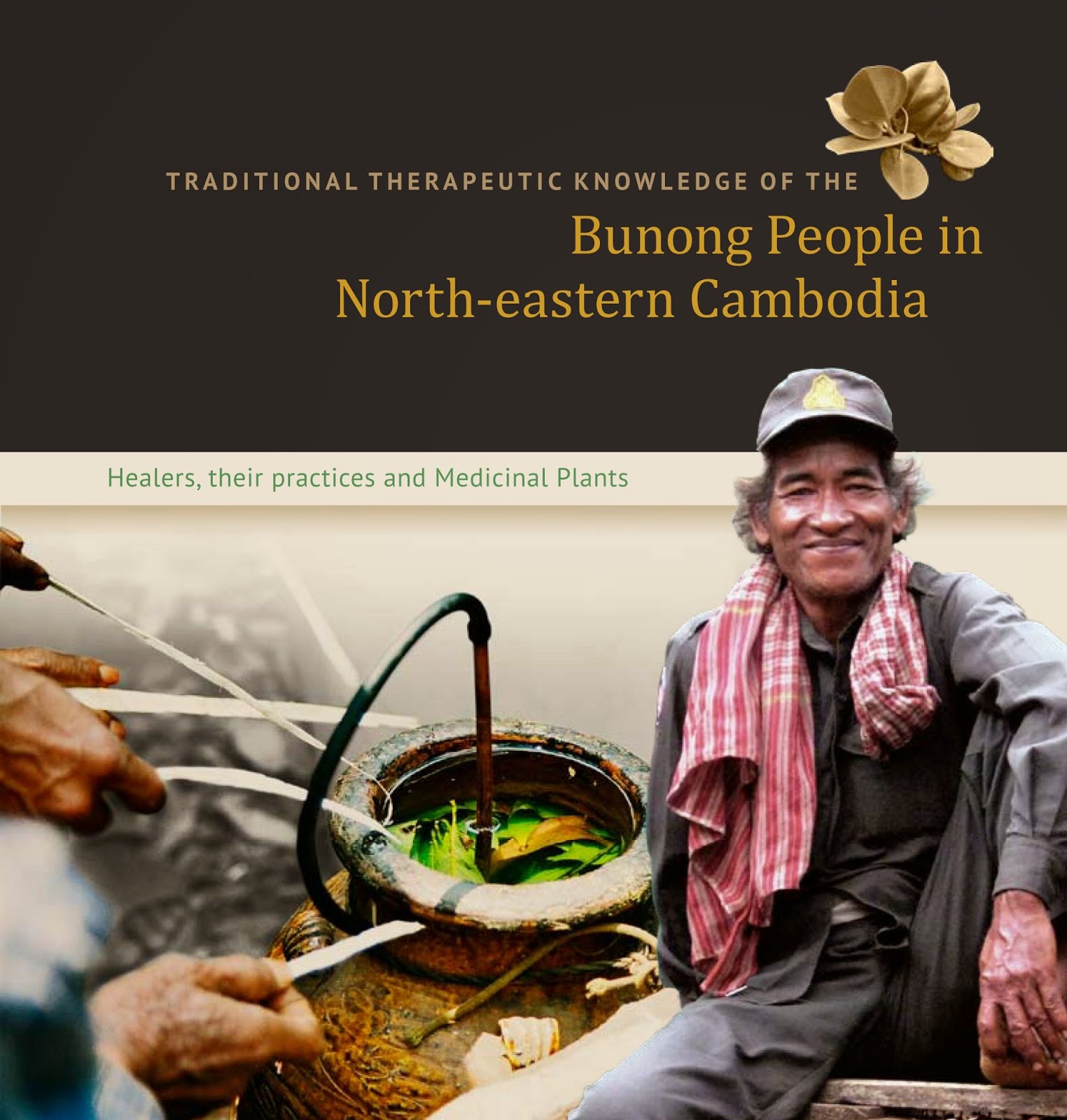 This story is published in Nomad RSI's technical publication.  It explains the many medicinal uses of ginger, not just in childbirth. Please contact me if you would like a copy.   As with many Bunong stories, because it is a spoken-only language, they are handed down from generation-to-generation.  Too many stories in the memories of elders are being forgotten.  This why our Mondulkiri Cultural Centre is aiming to record as many as possible for posterity.

Finally to round off the story and give more credence to it, the same google search about ginger revealed this Hindi proverb:


"What does a monkey know of the taste of ginger?"


I think all cats, ginger or any other shade, would endorse that sentiment!

Not part of the story, but wants to be, this Takhmau (Cambodia) Puss plonked himself or herself on my knee, with much purring, so deserves a place, even if he/she seems shocked to have his photo taken: 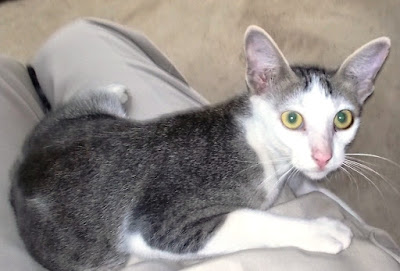