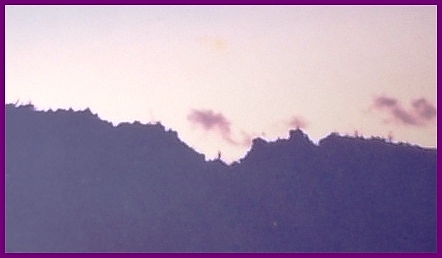 One of my big regrets is having few mementos from the pre-digital photography age of my time on Saint Helena.

I am sure quite a few physical copies are still cherished from the many weddings, and maybe some colour “slides” lurk in a carousel in some hidden corner?  Imagine my surprise today, when digging out an old dusty folder here on Cambodia of my past employment contracts when, popped out a very poor but recognizable snap. And one that I do not think Darrin and Sharon is yet to target?

When Nick Thorpe offered Shirley and I the plot of land for a house near Southerns, most people said that we (or I) were daft, but despite the slope, if there was one thing that appealed to me it was that Friar.

And I had the pleasure of many years of sitting on the verandah watching him as the sun went down.  Sometimes we shared the first sightings from the horizon of the RMS St Helena on what seemed an eternity as it made its way home.

Before my verandah spot came to pass the Friar cropped up in many conversations with Edward McDaniel, the Mouse, and Lynette Louisa.  (The “a” by the way is my replacement for the “e”).

If there is word to describe Mr McDaniel, it would be taciturn, but that belied a warm (if well-hidden) and talented human being. He was a good house-builder, even if his ancient blue Land Rover had to be avoided absolutely at all costs on Saint Helena’s motorways.  And the Mouse, well we all know him, don’t we?

Usually the three of them would conspire.  That Friar had got to go.  “I will go there and knock down his head!”, they all wagered.  Fortunately, none of them ever did.

But one day, I thought I really should go there.  Now there are two ways.  You can clamber along the ridge from Rosemary Plain, past the graves with Chinese lettering.  Or you can take the direct route as I did up past Pat Chicks’ PWD-assisted house. I have done both.

I tell you that both routes are a lot more arduous and longer than you think.  But I got there, eventually, skin much prickled, and somewhere there may be my reverse photograph of our house from that splendid reach.

And do you know what really surprised me is how small that Friar is.  His head could be easily detached with a crowbar.  I am glad no-one did.
Something must be done about St Helena.
Update January 2021 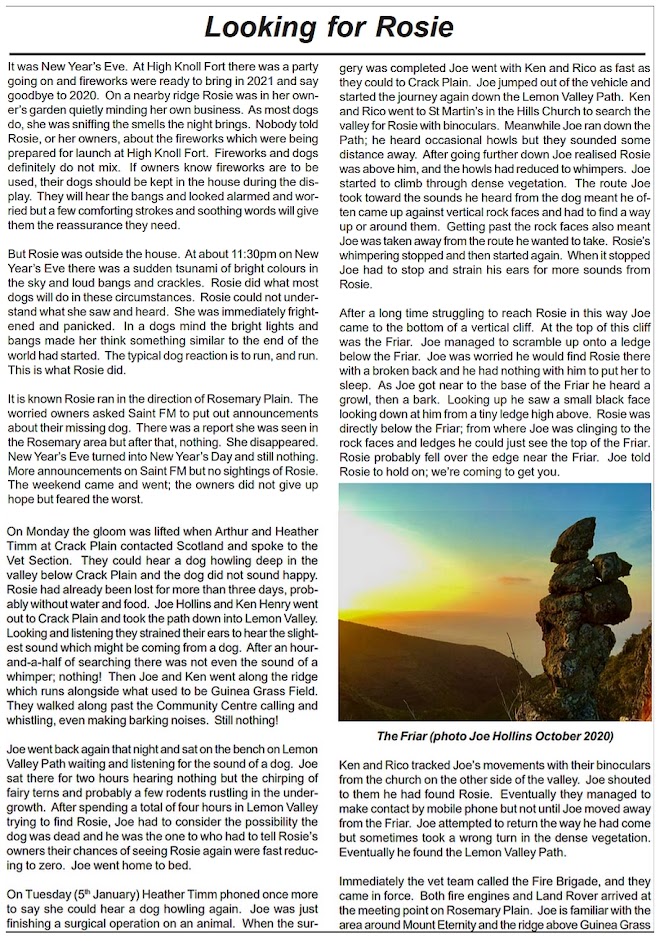 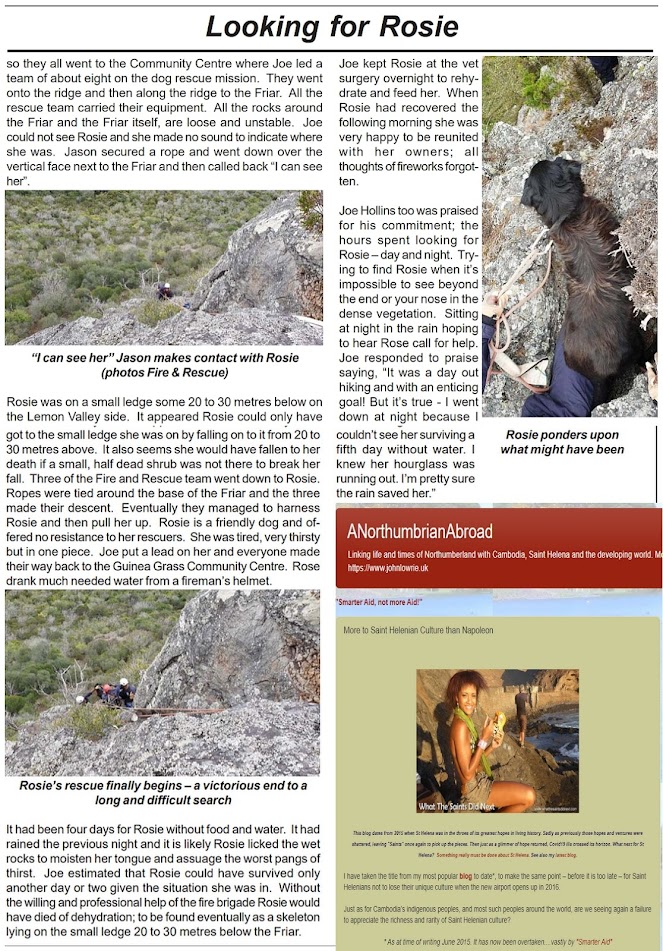 I am most grateful to Mr Ken Westmoreland for kindly providing from his ample collection a number of works about St Helena as well as on related subjects – more UK [ex-] colonies; other small island states, and the governance issues I myself raised in my own article about St Helena and of course in all of my blogs.

There is a rich depth of material and some very distinguished analysis very much of which agree on essential conclusions, most pertinent of which is Saint Helenians seem to always end up with a bad deal irrespective of good intentions or their absence. One author Harry Ritchie in his book “The Last Pink Bits” says it better than me, perhaps speaking for all and for time immemorial. The last chapter was on St Helena whose people he described as being treated like scum by the UK, which moved him to the point of tears, and how the Overseas Development Administration (fore-runner of DfID) had, despite its consultants working on things 'for years, and years and years, and come up with absolutely bugger all'.

l suppose with the building of the airport that jibe might be unfair, although of course the mandarins cannot possibly claim not to have been fore-warned that this the most “generous” aid project for St Helena was not generous enough if it was to accomplish its lofty aims of generating extra tourism and revenue for the island to pay its way for second and subsequent years. The DfID business model was to accomplish that feat achieved only once in century or more.

Psychology, as I keep postulating in my blogs, is as important if not more so than – to use awful Foreign Aid jargon – “technical capacity-building” which is of course always the “go-to” recipe to address DfID and the Foreign Office’s woes.  As the late Bernard Braine MP used to say while jabbing his thumb “Something must be done for St Helena”. So that’s a sign of doing something as well as “kicking the can down the road”.  Saints simply shrug their shoulders and remark “another expert passing through.” They’ve seen it all before far too many times.

Their perspectives are seldom sought or analysed in-depth.  Mind you, that is a characteristic of Foreign Aid generally. Seldom are “beneficiaries” in charge of their own problem, solution, priority “projects”.  That error was not made by Charlotte Parker in her academic thesis “Repertoires of a St Helenian Identity”.  She took a disciplined at times forensic anthropological-style approach to discern “What makes Saints tick”; how they have evolved and what are the main influences. She winkles out a lot of what is often unsaid and not said to outsiders.

It takes much time to get to know people intimately, even more than time, you need good knowledge of behavioural sciences, to cultivate the right circumstances where people give of their best.  You don’t do that with short postings abroad of 2-3 years. None have ever tried to explain why Saints do better off their own island than on it. Charlotte sheds light on that conundrum.

Ken Westmoreland has acquired masterful knowledge and a collection of writings on other islands, some of which have been buried in copious dusty archives from the bowels of Whitehall to all those far-flung outposts around the world.  One by Alison Quentin-Baxter caught my imagination as it examined not just St Helena but Niue that of course I had identified as a suitable example for St Helena to follow (if allowed by the UK.)
Before I conclude I will point out one more notable paper rescued by Ken from its dusty fate, hopefully  in the cyber-space cloud permanently for future generations who will be still saying: “Something must be done about St Helena.” unless it is wrested from the clutches of DfID and the like.